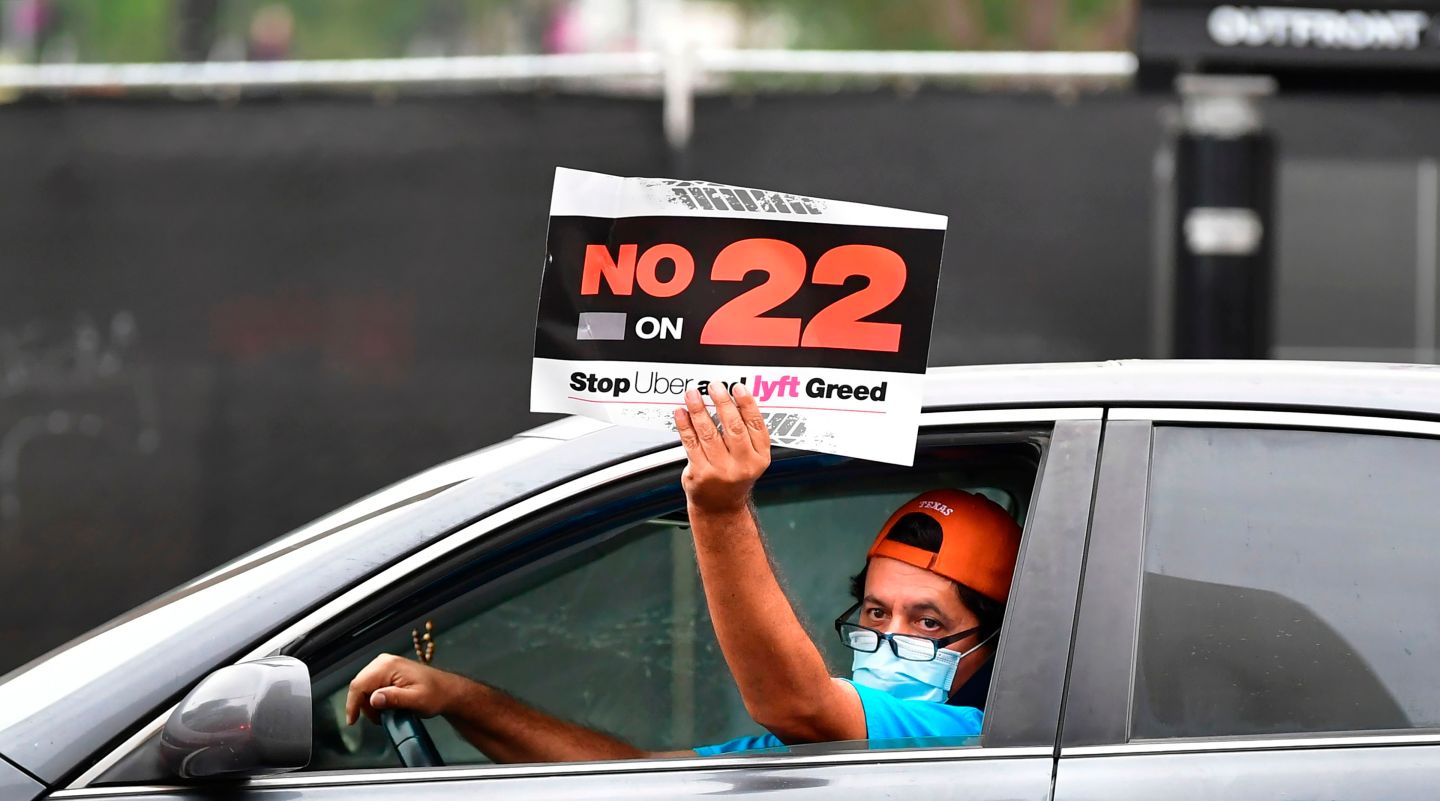 A driver taking part in an October protest at City Hall in Los Angeles to oppose Proposition 22, a California ballot measure that classified app-based drivers as independent contractors and not employees. The measure passed, upholding the business model of ride-hailing companies like Uber and Lyft.

What would a safety net look like for gig workers in the Internet-based economy?

It would provide health insurance, naturally, and a retirement plan, sick leave, and injured worker and unemployment compensation. And it would be equitable and portable: A person working part-time for different companies would have robust benefits that travel with them from job-to- job.

The good news is that we know how to design that sort of safety net. The bad news is that the digital platform companies keep missing opportunities to make it a reality.

Uber and Lyft are well aware of proposals to build better benefits systems. Following the publication of my book, Raw Deal: How the ‘Uber Economy’ and Runaway Capitalism Are Screwing American Workers in 2015, I met with executives at both ride-sharing firms. A central part of the discussions was my proposal for an “Individual Security Account,” a portable safety net for drivers and for other freelance workers.

My idea was that each worker would have a mandatory, government-regulated Individual Security Account, and that any business that hires a worker would contribute an amount pro-rated to the number of hours worked for that business. The worker would then use those funds to pay for safety net needs such as health care, Social Security, sick leave, injured worker and unemployment compensation.

Instead of pitting flexibility against security—making a gig worker choose between the work they want and the benefits they need—a portable safety net based on this kind of an “hours bank” system would allow for both. (The Screen Actors Guild, the Service Employees International Union, and the Teamsters all manage these kinds of multi-employer plans). The Individual Security Account, as I envisioned it, would fill in the gap when there is no labor union to coordinate contributions.

President Barack Obama endorsed my idea in his 2016 State of the Union address. Forty business and government leaders—including the co-founders of Lyft—signed a statement of principles calling for a portable safety net. Uber CEO Dara Khosrowshahi also called for enacting a portable safety net plan.

But when bills for portable safety nets were introduced in states, Uber and Lyft, rather than contributing 20% of a worker’s wages (the minimum necessary to fund an adequate safety net according to federal actuarial tables) offered to contribute 2.5%.

One study found that if their California drivers had been classified as employees rather than contractors these last five years, Uber and Lyft would have paid more than $400 million into the state unemployment insurance fund alone. Instead, California taxpayers have had to foot the bill for the significant wage and benefit gaps created by these companies.

Without a serious offer from the companies, the California legislature passed AB5, which attempted to solve the problem by reclassifying drivers as employees rather than independent contractors. Uber and Lyft refused to implement the law, and pursued Proposition 22 instead.

Why can’t these companies, rich enough to spend hundreds of millions of dollars on a ruinous ballot measure, do better by their workers?

The answer is that Uber and Lyft are in huge financial trouble. They lose billions of dollars every year. Profit margins are inherently low in the taxi business, and their predatory model subsidizes more than half the cost of every ride in a bid to undercut competition.

With the passage of Prop 22, the companies have now legislated into existence another miserly version of a portable safety net, along with a face-saving attempt at a minimum wage. The value of Proposition 22’s health benefit is estimated at about $1.20 an hour—well below the $4 to $6 hourly value of benefits mandated for employees under state and federal laws.

Proposition 22 also appears to offer to drivers a new hourly minimum wage of at least $16.80 per hour. But read the fine print: A complex formula will be used in which only “engaged hours” (when the driver has a passenger in the car) will be counted as hours worked when calculating the minimum wage.

A driver, in a 10-hour shift, might only have passengers for five hours. If the driver earns $100 in that shift, that would amount to only $10 per hour—less than California’s legal minimum wage of $12 per hour. Yet the Prop 22 formula will calculate that wage as $20 per hour, meaning the companies will have no obligation to top it up.

None of Prop 22’s offerings come close to what drivers would receive if voters had rejected the initiative and drivers had remained regular employees instead of independent contractors.

The CEOs of Uber and Lyft talk a good game, saying they are “ready to do their part” to help their drivers. But they are hamstrung by their own unprofitable business model, which has also turned out to be bad for many of their drivers, for traffic congestion, for the environment, and for transportation. How much longer can society afford to allow this business model to continue?

Steven Hill is the author of Raw Deal: How the ‘Uber Economy’ and Runaway Capitalism Are Screwing American Workers and Expand Social Security Now: How to Ensure Americans Get the Retirement They Deserve. He originally wrote this article for Zócalo Public Square.