Bankers were the villains of the last recession. They can be heroes in this one 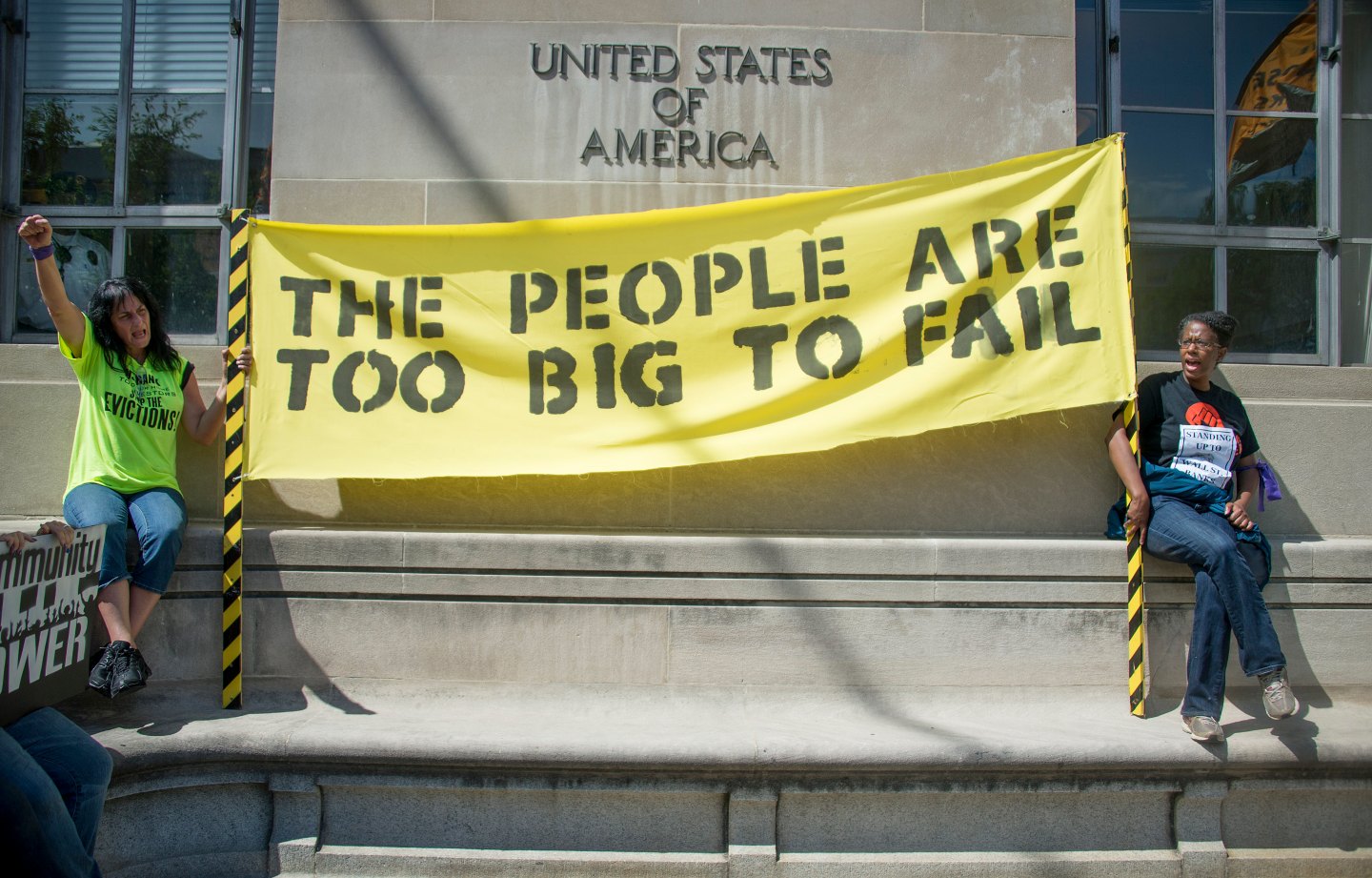 Protesters during a rally against big banks and home foreclosures in Washington, D.C., in 2013. Banks that stumble in the current crisis “risk doing damage not only to their customers and shareholders but also their own careers,” write the authors.
(Photo by Jim Watson/AFP via Getty Images)

Banks didn’t start the coronavirus recession, and so far they’ve been part of the rescue effort. But with the next round of federal relief uncertain, ordinary Americans are bracing for bigger financial troubles on the horizon—and bankers are facing a moment of truth.

Despite months of job gains, the number of people receiving unemployment benefits is still nearly twice the Great Recession peak more than a decade ago.

So far, government aid has significantly blunted financial stress for millions of Americans. But federal relief programs such as student-loan deferrals and extended unemployment insurance have expired or soon will wind down. By next spring, if federal relief isn’t extended, up to 20 million Americans will see their incomes fall to zero, according to the latest Department of Labor weekly jobs report. And many of them will also see their cost of housing go up dramatically as mortgage forbearance programs come to an end.

The government will likely grant a fresh round of aid at some point. But the price tag will have to be large, and the rollout swift, to prevent severe stress in households already suffering from the recession. The blunt instrument of fiscal policy isn’t likely to keep everyone afloat for much longer. Even small gaps in income can lead quickly to deep levels of financial strain. Before the coronavirus recession, 37% of American households didn’t have enough cash on hand to cover a hypothetical $400 expense, according to a 2019 Federal Reserve study. And the pandemic, of course, has only underscored how dangerously close to the line of insolvency so many Americans live.

In short, millions more Americans could soon fall behind on mortgages, credit cards, and car payments. When that happens, attention will shift to banks.

U.S. mortgage lenders bore much of the blame for the last recession, and many top executives ended up losing their jobs. This time, banks have been part of the solution—the public face of Paycheck Protection Program loans and other measures that have helped millions of Americans stay solvent. But when customers begin missing loan payments, bankers will be forced to take actions that could flip the script and turn them into villains once again.

Alternatively, they can choose to be remembered as benevolent innovators. There are three ways banks can both help their customers in the short term and perform for their shareholders in the long term.

First, they can seize this opportunity to put empathetic client care and long-term relationship building ahead of short-term profits.

When borrowers start missing payments, banks will have every legal right to try to claw back every dollar they are owed. But that might be unwise. Most banks have already set aside billions of dollars in reserves and are optimistic they won’t need to earmark more. If they overzealously collect on delinquent loans, the public relations and regulatory cost could be high—at a time when the monetary value of trying to collect on many of those loans is at an all-time low. The math of being as lenient as possible for borrowers who are truly without fault has never been more persuasive.

Second, bankers have an opportunity to become more flexible. After the mortgage meltdown of the 2000s, regulators imposed so many new rules and restrictions that banks decided it was better to standardize their operations to avoid any missteps. If they continue down that path in the coming months they will risk being seen as robotic and ineffective. Bankers have a chance to set a new course toward customized client care and advice, which would help strengthen relationships and avoid perceptions that they are looking only after their own interests.

Third, they can become emergency lenders. The current stalemate in Congress is the third in the past two years to leave households facing a short-term cash crunch even though help from the federal government was almost certainly on the way—the others being the government shutdown at the end of 2018 and the delay in the rollout of the CARES Act earlier this year. It seems unlikely this will be the last such occasion.

Banks can help solve this problem by making short-term loans at reasonable interest rates to tide people over until the federal relief arrives. That would help customers in the near term and solidify long-term relationships.

Whether or not the coronavirus recession turns out to be worse than the Great Recession, the number of stressed American households is about to increase sharply. Bankers will be under a microscope like never before as they decide how—or whether—to help customers. If they succeed, they will build relationships for life. If they stumble, they risk doing damage not only to their customers and shareholders but also their own careers.

Aaron Fine is a partner at Oliver Wyman and head of the consultancy’s retail and business banking practice in the Americas. Ahmet Hacikura is a partner in the practice.