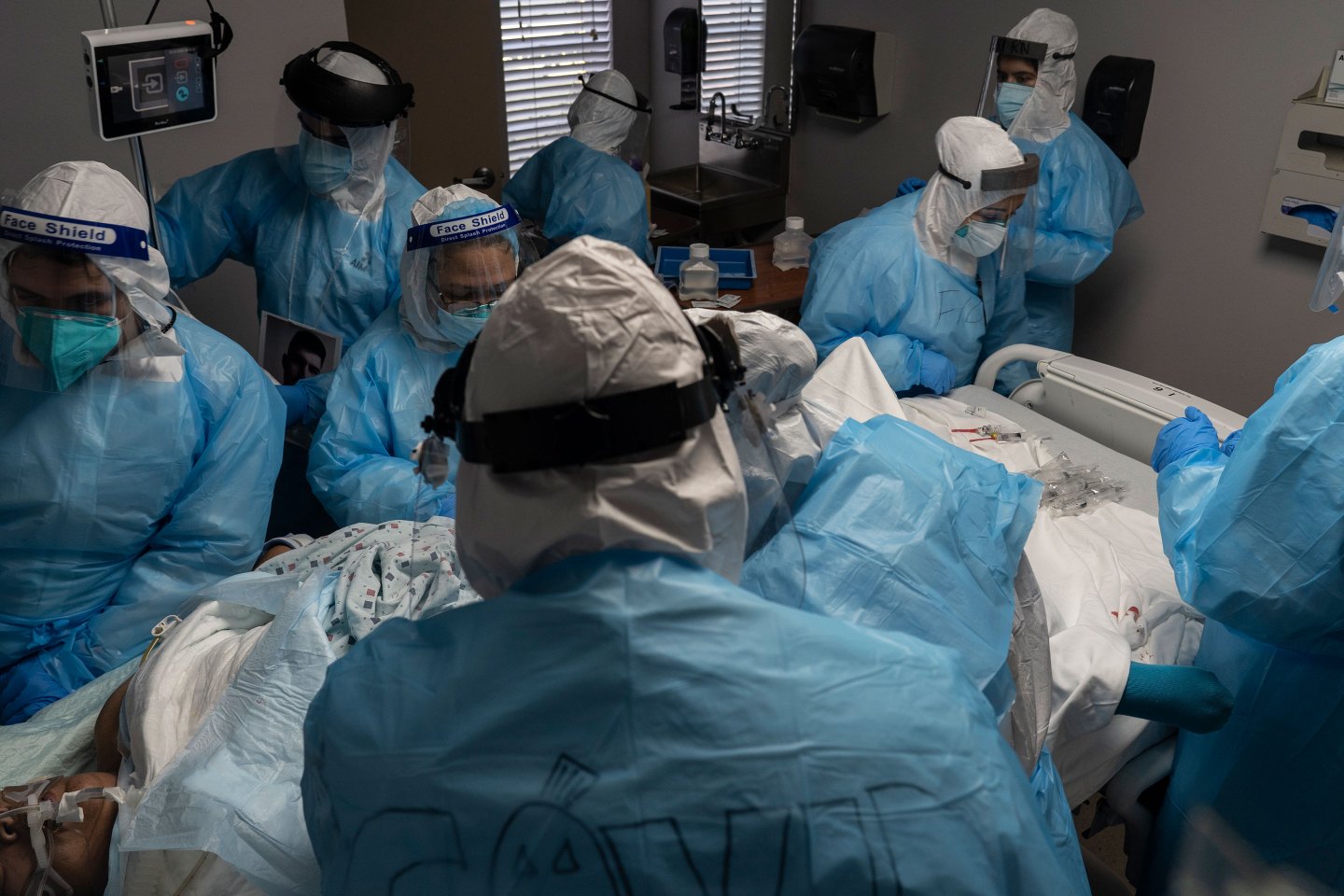 As you may have surmised by now, the private health insurance industry in the U.S. didn’t accumulate its massive wealth by running deficits. It is a business designed to turn profit and please shareholders. But with COVID-19 ripping through our country and the 2020 presidential election still undecided, this may be a perfect time to reflect on our broken system and decide how we want it to work for us.

It is an auspicious moment. With over 9 million cases in the U.S. already and many more millions likely to come, we’re facing the very real possibility that COVID could qualify as a preexisting condition for patients going forward. And with an estimated 10% of COVID patients experiencing more prolonged symptoms like fatigue, “brain fog,” headache, and shortness of breath, the numbers of new patients with such preexisting conditions during this pandemic are both significant and worrisome.

This is concerning for insurers, too, but for another reason entirely: They make more money when they insure healthy people who make few or no claims. The industry is highly incentivized to avoid having people with high-risk or chronic conditions who visit providers often, frequent the hospital, and undergo lots of procedures.

The Affordable Care Act (ACA) has been critically important in this area. Prior to its passage, patients with preexisting health conditions could be denied coverage completely or not covered for those specific conditions. Insurers had the ability to make it difficult for high-risk patients to maintain their coverage by charging exorbitant premiums, being slow to process claims, and adding mounds of paperwork.

It’s not a new phenomenon, and it is one that I know intimately. In the 1980s, when I was just 23, I developed a rare salivary gland cancer. In addition to everything else that was suddenly swirling through my life, my insurance premiums shot up by 67% in six months. Now, decades later, we are seeing Americans similarly saddled with huge medical expenses—and that’s to say nothing of the millions among us who cannot afford coverage at all.

President Trump has tried repeatedly over the last four years to abolish the ACA. Without a clear replacement, such an action could leave millions of Americans, especially those with preexisting medical conditions, in dire straits. The case challenging the constitutionality of the ACA is before the U.S. Supreme Court for the third time. Said Karen Pollitz, an expert on health care law, in the Atlantic: “It just feels kind of scary. I mean, 20 million people could lose their coverage if this law gets erased. And a whole lot of us—over 50 million of us adults—could be again labeled uninsurable.”

I can relate, not just as a physician but as a patient. Presently, I appear to have a recurrence of my tumor. Why would any insurance company want to pick me up right now and risk the chance of being on the hook financially for possible radiation treatment, surgery, or some of the insanely priced new cancer drugs? The Supreme Court’s decision could topple many Americans into an abyss of despair—and could kill some.

How did we get here? Well, part of the problem is that our health care system was never really master-planned. During World War II, with the government restricting wage increases in order to fight inflation, businesses began creating employer-sponsored health insurance in order to attract new employees. That practice continued through the decades, and our health care system evolved into what Brad Spellberg, chief medical officer at LAC + USC Medical Center, describes in his book Broken, Bankrupt, and Dying as a “hodgepodge” of uncoordinated care involving insurance companies, health care providers, and government programs.

This makeshift system has cost us dearly. We spend more on health care than any other country, whether measured as a percentage of GDP or per capita. Our health care expenditure in 2018 was $3.7 trillion, or 16.9% of GDP—nearly twice as expensive as that of the average Organization for Economic and Cooperation and Development (OECD) peer high-income countries.

We don’t even benefit from all this spending. According to research from the Commonwealth Fund, the U.S. ranks last in life expectancy among similar high-income countries, but first in suicides. We have the highest rate of avoidable deaths for conditions like heart disease, diabetes, or cancer, and the highest chronic disease burden (such as asthma, high blood pressure, and heart disease).

The awful advent of COVID-19 should provoke a hard look at our inefficient and needlessly complicated system—and serious ideas for reforming it. Ideally, we want a system that will take care of all of us, including those who have had COVID or post-COVID symptoms over the long haul. America’s current fee-for service model, which bills patients for every line item and every procedure, incentivizes physicians to do more and bill more. We need a system that prioritizes health outcomes over volume.

What can we do? In an email interview and in his book, Spellberg embraced the idea of a single-payer system (the type where the government pays private and county hospitals to deliver care) with an optional private insurance buy-in.

“Single-payer systems throughout the world deliver better outcomes at much lower cost than private multi-payer systems do,” he said. “That is an objective reality.”

The system would include health care for all via a public health plan, funded by central federal taxes collected from everyone. Private insurance options would exist for those who wish to purchase them, but these individuals would still contribute funds to the public plan. Australia and New Zealand are two countries that operate this way; costs are much lower, the systems perform very well, and average life expectancies are longer.

Under this model, businesses would no longer be burdened with paying for their employees’ health care, enabling them to be more competitive in the global marketplace. (U.S. companies spend more than $620 billion on such care annually.) Public and private insurance companies would be able to coexist and compete against one another, according to Spellberg. In Canada, 25 million people have purchased additional private insurance, despite most of their 37.5 million citizens being insured by the government.

Administrative costs would be drastically reduced with a simplified single-payer system (cost savings estimates range between $200 billion and $500 billion), and care would improve as the financial incentives become more aligned with quality rather than quantity. Pharmaceutical drug prices would be negotiated downward and out-of-pocket expenses minimized. Price transparency would actually exist.

Americans want options. We want access to affordable, streamlined health care. And in the midst of a pandemic, we certainly want universal coverage that does not deny those with preexisting conditions.

Spellberg notes that change in the U.S. is not a problem of knowledge, but a “problem of will and politics.” In this case, though, even two-fifths of Republicans have indicated that they would favor single-payer reform. As the author pointed out, it can be done, because other countries are already doing it.

“Americans are getting ripped off by our health care system,” says Spellberg. “Our system is horribly broken, outrageously expensive, and kills people.” It is time for each of us to demand change, so that all of us have access to health care while retaining our tried and true American value of free choice.

A big first step is to stop treating a single-payer plan as a hostile force, but rather a way to take care of our own. And the next step, of course, is to insist that health care reform be placed front and center of the national agenda no matter who sits in the White House for the next four years.

Carolyn Barber has been an emergency department physician for 25 years. She is co-founder of the homeless work program Wheels of Change and author of the new book, Runaway Medicine: What You Don’t Know May Kill You, which was a top-ranked Amazon best seller in health care administration.