Will white women step up, at the polls against Trump and beyond? 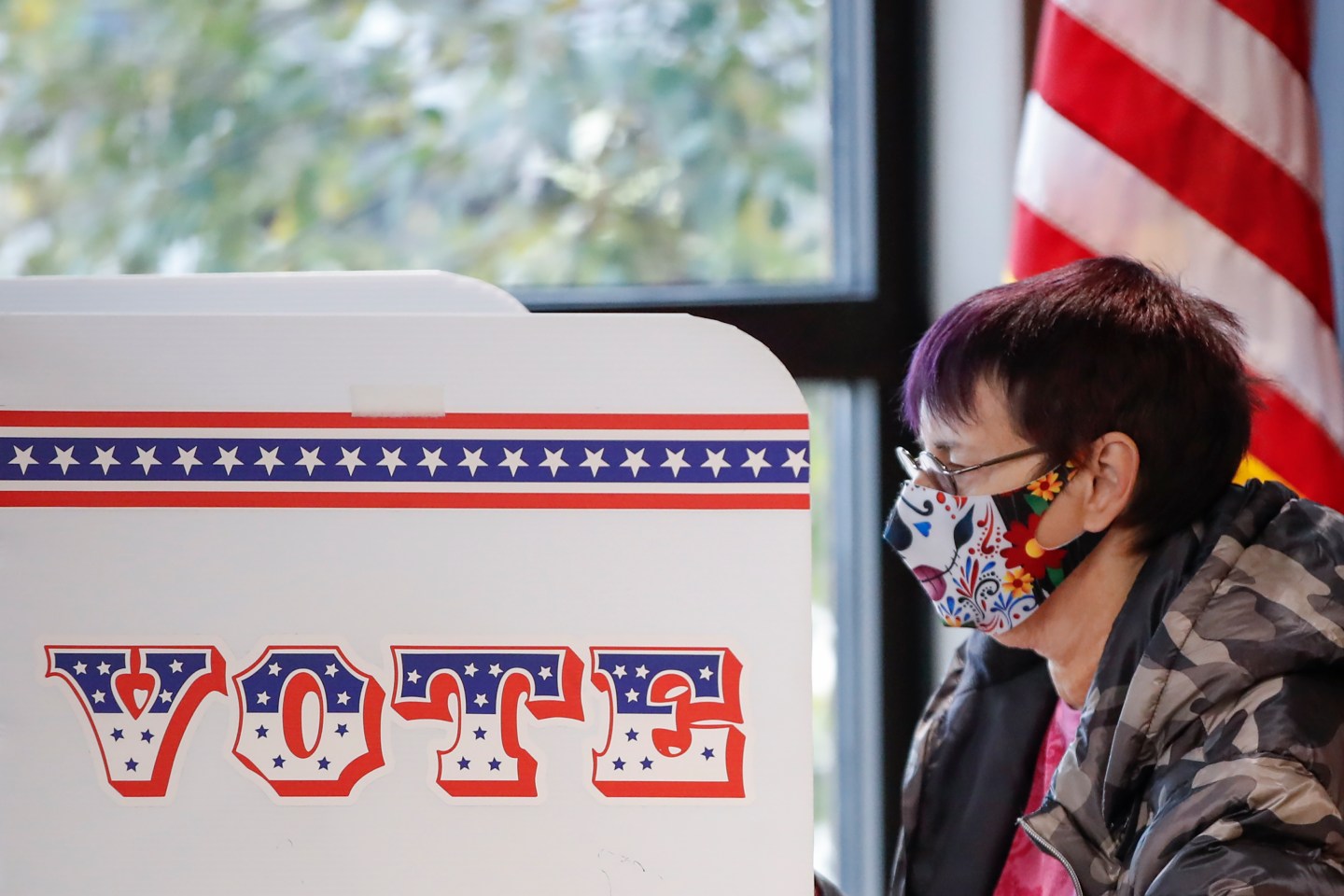 An early voter in Milwaukee. Majorities of white women have voted Republican in recent elections, but this year President Trump “has good reason to be nervous,” writes Julie Kohler.
KAMIL KRZACZYNSKI—AFP/Getty Images

In the lead-up to last night’s debate, President Trump escalated a theme that he’s been pushing for weeks. “Finally! Suburban women are flocking over to us,” he tweeted, though no polling data support the claim. His latest Twitter rant came on the heels of the more desperate note he sounded at a rally last week in Pennsylvania. “Suburban women, will you please like me?” he pleaded.

On the surface, Trump’s odes to “suburban housewives” may seem like a distraction from the serious issues at hand. But what he’s signaling is important. What he’s telling us is that he’s pinning his reelection hopes, once again, on white women. It’s a political play straight out of 1968: agitate white women about the imagined threat of urban violence and “low-income housing” invading their white, picket-fenced neighborhoods.

Will they take the bait? Can we, as white women, do better?

If history is any guide, Trump is right to be courting white women. Majorities of white women have backed the Republican presidential candidate in nearly every election for the past 70 years. Throughout American history, much of white women’s political activism has been directed to maintaining white supremacy, from active support for school segregation and Jim Crow in the South to the fight against busing in the North. Beginning in the 1970s, Phyllis Schlafly channeled angst over eroding postwar economic stability for the white middle class into a mass political movement. Through her STOP ERA campaign, Schlafly solidified a base of highly religious white women who remain loyal to the Republican Party to this day.

Trump’s rants about the suburbs gin up that base. But they also tap into the more subtle ways that white women—even those who don’t identify as conservative—have been tacitly complicit with the structural racism that shapes American society. From the segregated housing patterns forged through decades of redlining and predatory lending practices to the inequitable public education systems that those practices have produced, white women and their families clearly benefit.

And yet, Trump also has good reason to be nervous. A lot has changed in four years. Women’s outrage mobilized the historic women’s marches in the immediate aftermath of the 2016 election. Fueled by strong turnout among women of color and a nine-point swing in white women’s votes, the 2018 midterms ushered a diverse, record-setting wave of Democratic women into office. Over the summer, our nation—Black, brown, and white—took to the streets for record-setting mass protests against police violence. Support for Black Lives Matter surged close to 70%.

Here’s more good news: The seeds of a political realignment are there, all over the country, in communities large and small. For the podcast, I spoke with women in Ohio who have been gathering—in person and now virtually—for wine-fueled political conversation and using targeted digital content to activate their personal networks for political action. I spoke with Lisa, a white woman in rural Alamance County, North Carolina, who has channeled her outrage over Trump’s election into a local campaign for bail reform. I spoke with faith-based leaders in Minnesota who organized a viral #IAmASuburbanMom social media campaign. When Republican politicians claimed that “suburban moms” were fearful of the mass demonstrations that erupted after George Floyd’s murder, suburban women stood in solidarity with the protesters.

Common to this work is an understanding that, as political scientist Hahrie Han wrote, “to build power, outrage needs organization.” These community groups don’t fetishize white women under the guise of some consultant-crafted term du jour (i.e., “soccer moms”). Rather, they empower them as change agents. They provide safe spaces in which women can safely question or dissent from the dominant political orthodoxies of their communities and build their political knowledge, confidence, and agency.

Will it work? There are plenty of reasons to be skeptical. The legacy of white women’s racism—even within gender justice movements from women’s suffrage to modern-day feminism—looms large. As Treva Lindsey, a professor of women’s, gender, and sexuality studies at Ohio State, told me, “Without actually reckoning with how, in particular, white women have contributed to, perpetuated, or been complicit with white supremacy, you see…fragile solidarities that are easily broken.” For this moment to be different, white women need to be clear on what advocating for justice requires of us.

The election will signal whether greater numbers of white women will do the baseline work necessary for moving our country forward. But in order for this moment to be meaningful, Nov. 3 must be just a starting point. “Transformation happens in the context of moving towards shared goals together,” National Domestic Workers Alliance executive director Ai-jen Poo told me.

Are white women willing to move forward? To fight as passionately for the dignity of others as we would our own? To correct the wrongs from 100 years ago, when our white foremothers secured their right to participate in American democracy, then turned a blind eye to the continued disenfranchisement of Black and Indigenous women?

Poo, for one, remains optimistic. “I do believe that if anyone is going to figure out how to show up right and model what it looks like to have a healthy multiracial democracy, it will be a process that happens among women first,” she said.

The most pressing question for this November, then, is not whether some mythic “other” white women will come around politically, but whether we—as white women who profess to care about equity and justice—will do our part.

And that’s an answer that can only come from each of us.

Julie Kohler is the host of the podcast, White Picket Fence. She is a senior adviser to the Democracy Alliance and a fellow in residence at the National Women’s Law Center. Follow her on Twitter.