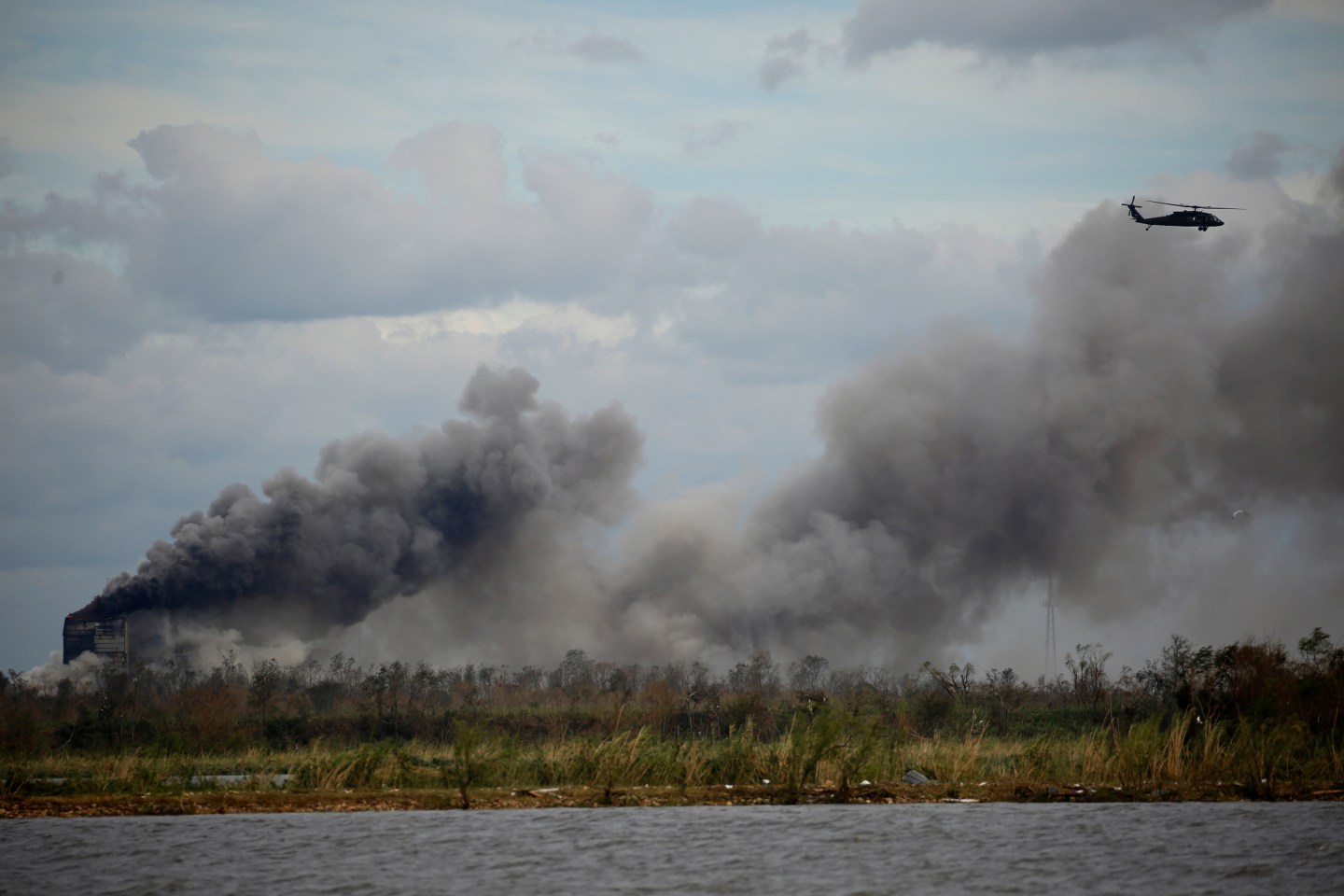 A UH-60 Blackhawk helicopter flies over a chemical fire burning at BioLab plant after Hurricane Laura made landfall in Westlake, Louisiana, U.S., on Thursday, Aug. 27, 2020. Hurricane Laura raked across Louisiana early on Thursday, becoming one of the most powerful storms ever to hit the state with a "catastrophic storm surge," flash floods and devastating winds that could inflict more than $15 billion in insured losses. Photographer: Luke Sharrett/Bloomberg via Getty Images
Luke Sharrett—Bloomberg/Getty Images

Hurricane Delta, the 25th named Atlantic storm of the 2020 hurricane season, made landfall in southwest Louisiana in almost the exact same place Hurricane Laura swept through just weeks ago. Laura struck Gulf Coast communities the week of the 15th anniversary of Hurricane Katrina. In Laura’s wake, a chemical plant ignited into flames in Lake Charles, La., spewing toxic smoke into the surrounding area for three days.

This is the heart of the petrochemical industry in the U.S., where clusters of industrial facilities dot the landscape. As protests around the country have drawn attention to Black people being killed by police violence again and again, violence of pollution and climate disaster plagues these same communities.

Over 48% of Lake Charles’s residents are Black people. Since Katrina made landfall 15 years ago, devastating Black communities in particular, the country has seen waves of disasters amplifying existing inequality. In 2017, when Hurricane Harvey struck southeast Texas, the residents of Houston, a city with no zoning and hazardous facilities on top of each other in Black and brown neighborhoods, literally swam in a toxic soup of air and water pollution released from dozens of facilities and waste sites in the region.

In West Louisville, near the same neighborhood where Breonna Taylor was killed by police officers in her home, residents are fighting not just police brutality, but also the long-term violence of pollution. Louisville ranks number one for poor air quality among hundreds of mid-sized cities in the U.S.

West Louisville, where more than 80% of the population is Black and median household income is $21,700, houses 56 toxic facilities and bears the brunt of 80% of Louisville’s pollution. In the Rubbertown industrial zone just a few minutes away from Taylor’s home, residents live about 12.5 years less than do residents of Louisville’s most affluent white neighborhoods.

This life expectancy gap mirrors the gap in the impact of the coronavirus between white people and people of color across the country. This is because the health conditions that result from living near air pollution make people more vulnerable to deadly respiratory diseases.

A recent study showed that people who live with air pollution have increased mortality risk from COVID-19. Black and Latinx people are exposed to disproportionately higher rates of toxic air pollution across the country. And nationally Black, Indigenous, and other communities of color have suffered higher rates of COVID-19 infection and death.

A just and equitable recovery from this prolonged crisis means not only mobilizing medical resources in the short term, but also ending pollution hotspots in communities of color.

As the experience of the people of Lake Charles reminds us, we do not have time to wait. The racial inequities laid bare today demand a Presidential administration to take aggressive action to confront pollution and environmental injustice. It is imperative that the next President takes steps to get to the root of this crisis and address health inequities by putting environmental justice at the center of a long-term recovery.

This election season climate change and environmental justice have become a flashpoint of debate, as storms and wildfires have raged across the country leaving orange skies and destroyed communities in their wake. While Donald Trump continues to waffle on whether he believes the science of the climate crisis, Joe Biden’s climate policy proposals include a commitment to pollution monitoring and investments in frontline communities. He has come out in support of ending fossil fuel subsidies, yet he also has stated his opposition to a ban on fracking.

Activists have called on Biden to take a clear position on climate justice. In July, over 110 organizations released the Frontlines Climate Justice Executive Action Platform, outlining a set of actions a Presidential administration can take that centers racial justice in climate policies.

This platform includes a proposal for a federal policy that leverages existing Clean Air Act authority to regulate and remediate concentrated pollution. The platform also includes the creation of a screen to evaluate all climate policies on how they impact equity, particularly concerning low-income populations and communities of color. Policies like these need to be part of a government mobilization against environmental inequality.

The linkages between pollution, public health, and racial inequality are clear. A President who is committed to getting this pandemic under control must also commit to addressing historic environmental injustice, discriminatory pollution, and the impacts of the climate crisis on the poor and people of color.

A full recovery from the crises at hand cannot put a bandage over the persistent discrimination that has resulted in chronic pollution, destroying lives in Black and brown communities. It is time to stop sacrificing people living in places like Lake Charles, West Louisville, and Houston.

We need leadership that will end the plague of pollution in our neighborhoods, prioritize the health of those who bear the most risk, and tackle environmental justice head-on.

Lennox Yearwood Jr. is a reverend, the president of Hip Hop Caucus Action Fund, a minister, a climate and community activist, and a U.S. Air Force veteran. Follow him on Twitter.