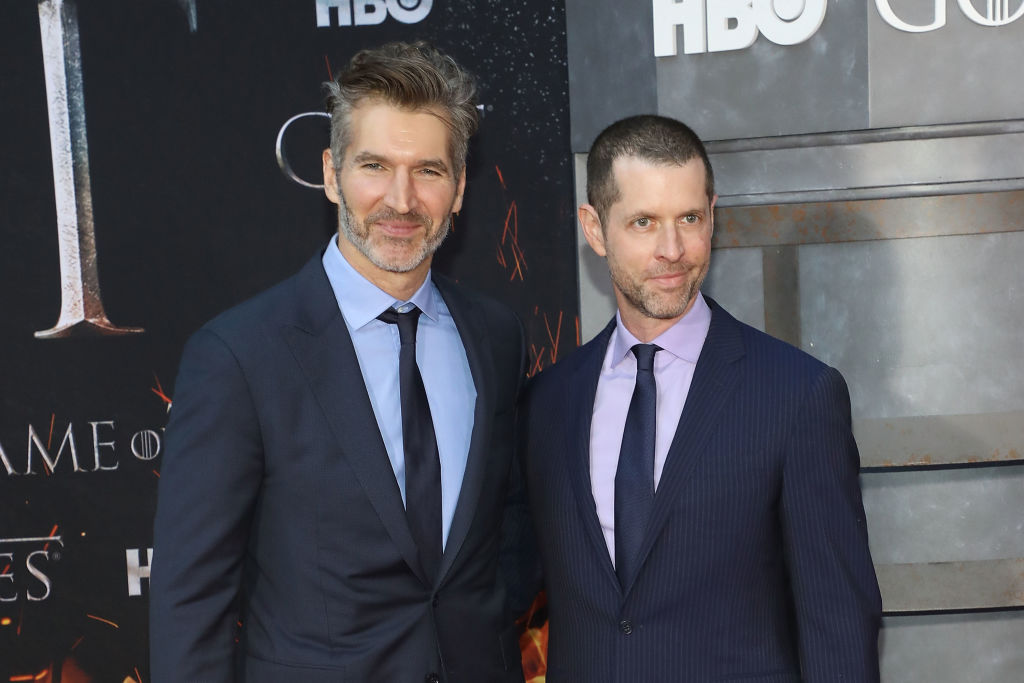 Netflix’s new blockbuster show The Three-Body Problem has become a problem for the streaming giant.

On Sept. 1, Netflix announced that it was adapting the popular Chinese sci-fi novel The Three-Body Problem into a series with Game of Thrones show runners David Benioff and D.B. Weiss at the helm. The project will mark Benioff and Weiss’s first TV show after Game of Thrones and the first project to come out of the pair’s reported $200 million deal with Netflix.

But the series has come under fire for comments book author Liu Cixin made to the New Yorker in 2019 that seemed to defend the Chinese government’s actions in the western province of Xinjiang, where Beijing is accused of constructing nearly 400 internment camps to detain and suppress the region’s Uyghur Muslim minority. Beijing describes the camps as “vocational training centers.” The U.S. government has called China’s treatment of Uyghurs a crime against humanity and is considering whether China’s actions should be labelled as genocide.

“Would you rather that they be hacking away at bodies at train stations and schools in terrorist attacks?” Liu said of China’s treatment of Uyghurs in the New Yorker interview, an apparent reference to China’s claims that the camps are a necessary measure to counter terrorism among violent extremists in Xinjiang. “If anything, the government is helping their economy and trying to lift them out of poverty,” Liu said.

Liu’s apparent support of China’s actions in Xinjiang prompted a group of Republican senators in the U.S. to call for Netflix to consider dropping the project altogether.

“We have significant concerns with Netflix’s decision to do business with an individual who is parroting dangerous [Chinese Communist Party] propaganda,” the group of five Senators wrote in a letter to Netflix last week. “We ask Netflix to seriously reconsider the implications of providing a platform to Mr. Liu in producing this project.”

In response, Netflix said it did not agree with Liu’s comments but indicated that it has no plans to cancel or postpone the show’s production.

“Mr. Liu is the author of the book—The Three Body Problem—not the creator of this show,” Netflix said, in a statement sent to Fortune. “We do not agree with his comments, which are entirely unrelated to his book or this Netflix show.”

Netflix rival Disney also recently came under fire for its controversial decision to cooperate with authorities in Xinjiang to produce its new Mulan remake, which a Disney executive said “generated a lot of issues” for the entertainment company.

Stanley Rosen, a professor of Chinese politics, society, and cinema at the University of Southern California, says unlike Disney, Netflix does not cater to Chinese audiences since the platform is blocked in China.

“I don’t think [the senators’ letter] is a big problem for Netflix,” says Rosen. Liu’s source material is unrelated to his comments on Xinjiang and Netflix is free to frame the TV show for Western viewers, he said. Disney, meanwhile, had to grapple with pleasing Chinese and American audiences.

Still, The Three-Body Problem appears caught in the geopolitical tensions between the U.S. and China. What’s more, the controversy is also only the latest in a series of problems the novel has encountered in getting to the big—or little—screen.

The Three-Body Problem‘s storyline opens in Beijing in the 1960s with Ye Wenjie, an astrophysics student caught in the turmoil of China’s Cultural Revolution. Ye, accused of sedition, is sent to work for an obscure government agency called the Red Coast Base and discovers a new method for transmitting interstellar messages.

Ye ignores the advice and responds to the message, and Trisolaris threatens to wipe out the human race over fears that Earth will develop technologies more advanced than its own.

The Trisolarian threat divides human society into factions, but the book ultimately ends with humanity banding together to prepare for war against the distant planet.

In the 2019 profile of Liu, New Yorker writer Jiayang Fan notes that the book’s themes mirror the relationship between the U.S. and China. China, the scrappy underdog, must rise up against an established and technologically superior foe bent on suppressing the weaker power, she writes.

Liu has denied that geopolitics undergird his work, but Fan writes that when the book was published “the models for Trisolaris and Earth were immediately apparent.”

Liu’s comments on Xinjiang also make sense in the context of his writings and China’s political climate, Rosen said.

Liu’s comments about Xinjiang are not all that surprising, Rosen says, since such views are likely held by the majority of Chinese citizens.

“His comments [about Xinjiang], in a Chinese context, are not exceptional, even though they are anathema to a Western audience,” says Rosen. China does not conduct public polling on controversial topics like Xinjiang as might happen in the U.S., but anecdotal evidence and Chinese Internet culture suggest that the Chinese public would largely agree with Liu’s outlook.

A hit in China and abroad

In 2007, Liu was already a prolific and acclaimed writer, but The Three-Body Problem launched him to international fame after it was translated into English in 2014. That year, he became the first Asian writer to win the prestigious Hugo award in Finland for best science fiction novel.

Liu has sold at least 8 million copies of The Three-Body Problem, with roughly 1.5 million of those copies sold outside of China.

In China, Liu’s series has been a massive hit, still reaching the top ranks of Chinese bestseller lists more than a decade after publication. In August 2020, the Three-Body Problem held the No. 4 spot on China’s fiction bestseller list, according to Openbook, a research firm in Beijing.

“This story felt singular, special, and eminently relatable,” Netflix vice president Peter Friedlander said in a statement about why the company chose The Three-Body Problem for the blockbuster project. “Chinese author Liu Cixin’s ability to interweave science with fiction made his vision of the future and extra-terrestrial contact feel more realistic than any other science fiction I’ve read.”

Benioff and Weiss decided to pick up the project because Liu’s trilogy is the “most ambitious science-fiction series” they had ever read, the pair said in a statement. His books, “take readers on a journey from the 1960s until the end of time, from life on our pale blue dot to the distant fringes of the universe.”

Rosen says Liu’s success is “very rare for Chinese science fiction, but his work is worthy of all the acclaim” given the imagination and scope of his writing. In the U.S., the book garnered such a following that it caught the attention of former President Barack Obama, who called it “wildly imaginative” in an interview with the New York Times.

Despite the The Three-Body Problem‘s enormous commercial success, it’s repeatedly failed to go from page to screen.

Yoozoo Pictures, a Shanghai-based film studio, has long held filming rights to The Three-Body Problem and first announced in 2014 that it planned to adapt Liu’s work into a six-part motion picture series. The first film was set to premier in 2016, but has been continually pushed back due to what the filmmakers described as delays in post-production.

In 2019, Yoozoo was also reportedly in talks to adapt the books into a 24-episode animated television show in China. In June 2020, the Chinese studio October Pictures announced that it would work with Yoozoo on yet another Three-Body Problem project, saying that top Chinese filmmaker Tian Xiaopeng would be at the helm of a new, live-action movie series. Yoozoo and its Chinese partners have provided few details about any of the projects, and Yoozoo has not responded to Fortune’s questions on where they stand.

Liu himself acknowledged that bringing his trilogy to life wasn’t easy.

“Given the past experiences of the Chinese film industry, [adapting] The Three-Body Problem would certainly be challenging,” he said in a conversation with U.S. filmmaker James Cameron in February 2019, referring to China’s relative lack of experience in producing blockbuster sci-fi films compared to the U.S.

Yoozoo did manage to turn Liu’s standalone novella Wandering Earth into a hit, grossing nearly $700 million in box office sales. But even with the domestic success of Wandering Earth, Yoozoo appeared determined to sell the rights to The Three-Body Problem so it could be produced outside of China.

In March 2019, Amazon was reportedly in talks with Yoozoo to purchase filming rights for The Three-Body Problem for $1 billion, though Yoozoo later denied the claims.

Yoozoo then sold the rights to Netflix for an undisclosed sum last month, but now, with U.S. lawmakers pressuring Netflix to reconsider its Three-Body Problem project, the fate of Liu’s work is once again in question.

Even with the controversy, Netflix likely is highly motivated to get the project across the finish line, says Chris Fenton, author of Feeding the Dragon: Inside the Trillion Dollar Dilemma Facing Hollywood, the NBA, and American Business

The rights to Liu’s books are “an important piece of business” for Netflix, Fenton says. Liu’s series is being “adapted by world class filmmakers” and has “huge franchise potential,” he says.

For now, Liu, at least, is likely hoping that politics don’t get in the way.

As he told the New Yorker in 2019, “The whole point [of science fiction] is to escape the real world!”