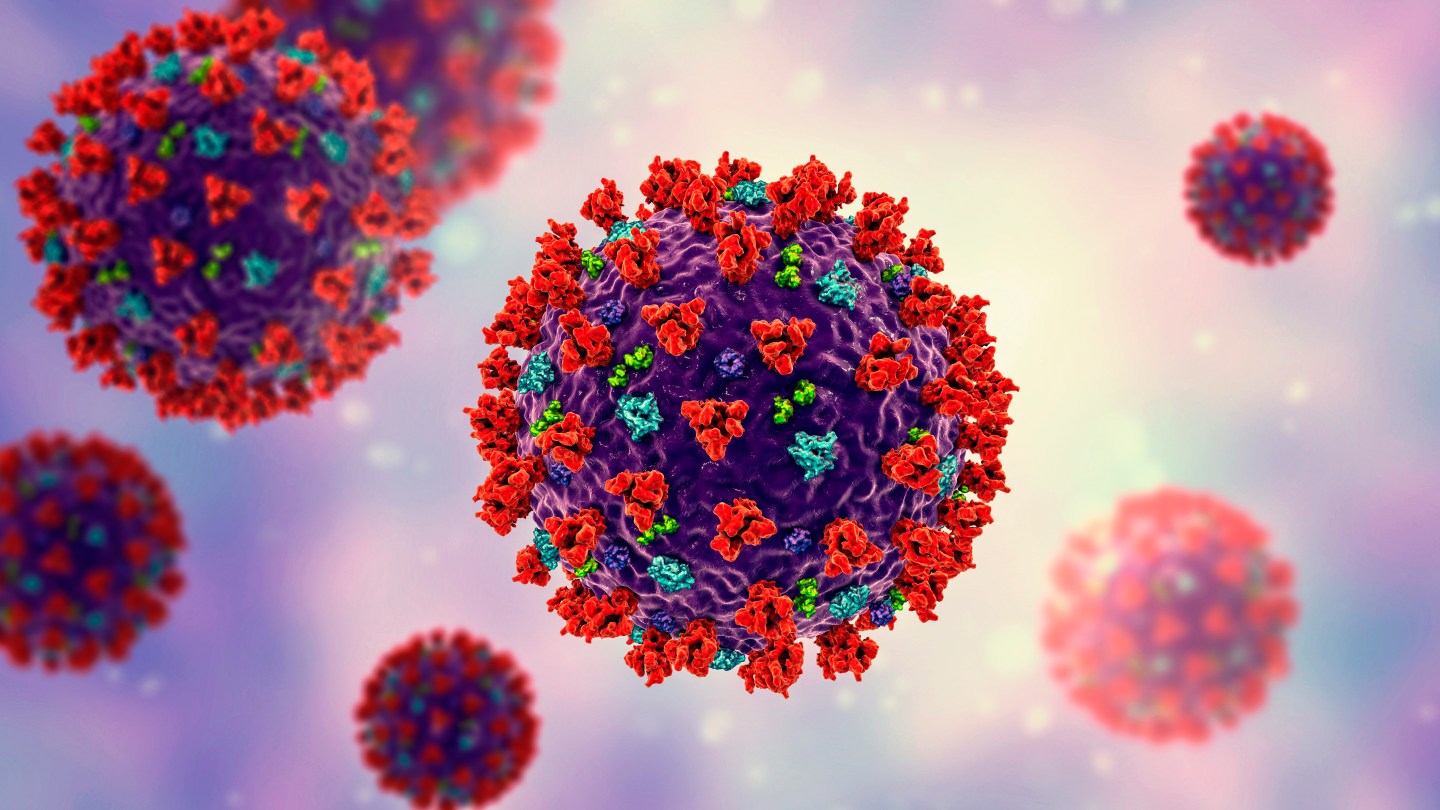 Illustration of coronavirus particles. Coronaviruses are a group of viruses named for their appearance under electron microscopy, where their round-tipped surface spikes make them resemble a crown. They can infect many animals and humans, causing respiratory diseases including the common cold, as well as more serious pneumonia. The 2019-2020 Covid-19 outbreak that started in Wuhan, China, is caused by the new coronavirus SARS-CoV-2 (previously 2019-nCoV). The 2003 SARS outbreak was also caused by a novel coronavirus.
Getty Images

Researchers in England say they have made a breakthrough finding that could help defeat the novel coronavirus. Other experts are cautious—they warn potential drug development could take a long time—but say it’s at least a step toward a better understanding of the virus.

As now-familiar images of SARS-CoV-2 show, the virus’s surface is covered with spikes. These so-called spike proteins are able to bind to the surfaces of human cells, leading to infection.

After producing these spike proteins in a test tube, researchers from the University of Bristol took a very close look using a recently developed imaging technique called cryo–electron microscopy, with cloud-based processes, building a 3D structure that they could then examine.

A 3D model of the coronavirus’s spike protein, produced by the Bristol University team.

The structure contained a surprise: pockets containing molecules of an essential fatty acid called linoleic acid (LA), which we absorb via food, and which we need to stay healthy.

Though our bodies don’t make it, they need LA to keep cell membranes fluid, so our lungs can take in oxygen, and to produce substances such as prostaglandin that protect against inflammation in the cardiovascular system.

COVID-19’s symptoms include widespread inflammation and respiratory distress. And studies have shown that people suffering from the disease have lower LA levels than normal. That suggests the virus is scavenging for LA molecules, using them to spread, and harming us in the process.

“We were truly puzzled by our discovery and its implications,” said Imre Berger, who co-led the study, in a statement. “So here we have LA, a molecule which is at the center of those functions that go haywire in COVID-19 patients, with terrible consequences. And the virus that is causing all this chaos, according to our data, grabs and holds on to exactly this molecule—basically disarming much of the body’s defenses.”

With the link between SARS-CoV-2 and LA now having been discovered, the Bristol team hopes it may be possible to turn the virus against itself. The idea is that new small-molecule antiviral drugs could fill these “druggable pockets” so that, once the coronavirus has first entered a patient’s body, it becomes a non-infectious dud that cannot spread.

In an interview with Fortune, Berger said there were two possible clinical routes that could now be taken.

In the shorter term, Berger said, LA could become part of a cocktail of drugs alongside other drugs such as Gilead’s remdesivir, which inhibits another protein in the virus and which has been shown to shorten hospital recovery times for some patients.

LA is nontoxic, and most drugs being considered for coronavirus treatment have side effects, so it is possible that the addition of LA could make it possible to “reduce the amount of other drugs [in the cocktail] to achieve the same beneficial effect,” he said.

In the longer term, Berger suggested, it might be possible to find a molecule that is “even better than LA in closing the spike protein”; the spike protein’s “druggable pockets” seem tailor-made for LA, but that does not mean they cannot take in something else.

This would mean the creation of a new drug for treating COVID-19.

Stephen Evans, professor of pharmacoepidemiology at the London School of Hygiene & Tropical Medicine, said in a statement released through the Science Media Centre that people shouldn’t expect the Bristol discovery to yield new drugs anytime soon, if at all.

But it could prove useful if other measures fail to tackle the coronavirus successfully, he said.

“The cost of any new drugs is likely to be very high and take quite a long time to develop, possibly a longer timescale than for vaccines because it would probably not build as easily onto existing drugs as the vaccines have built on existing vaccines,” Evans said. “If COVID-19 becomes a disease that is not able to be eradicated or brought under control by vaccination and other protective measures, this may offer hope for that longer-term future.”

Regarding the Bristol team’s mention of some relevance with remdesivir, Evans noted that remdesivir still hasn’t shown “really strong reductions in mortality.”

“This is a pandemic, and we don’t have anything at the moment that really works,” Berger said. “We hope and pray the vaccines will work out, but there are no guarantees that any of these vaccines will work. [With HIV] after 30 years of research we do not have a vaccine, but what works is a cocktail of antiviral drugs.”

As for whether the Bristol University paper might lead to the creation of a new stand-alone treatment for COVID-19, the researchers pointed out that a similar discovery of a fatty acid in the cold-causing rhinovirus led to the creation of an antiviral (pleconaril) that proved moderately useful in trials and was licensed for use in emergency cases, though side effects stopped it from being used more widely.

“The linoleic acid–binding pocket in SARS-CoV-2 will make an attractive target for possible designer drugs, lead candidates for which already exist from screens for rhinovirus,” said Michael Skinner, a reader in virology at Imperial College London, in the Science Media Centre release responding to the Bristol paper.

“Drug development and testing is likely to take some time and might have limited effect, or might need to be taken shortly after infection,” said Skinner. “Unless the drugs are already well known and tested, there will also be a need to test well for possible side effects.”

Nonetheless, Skinner and other commentators noted that the Bristol group had a good reputation and had used robust techniques to back up their discovery.