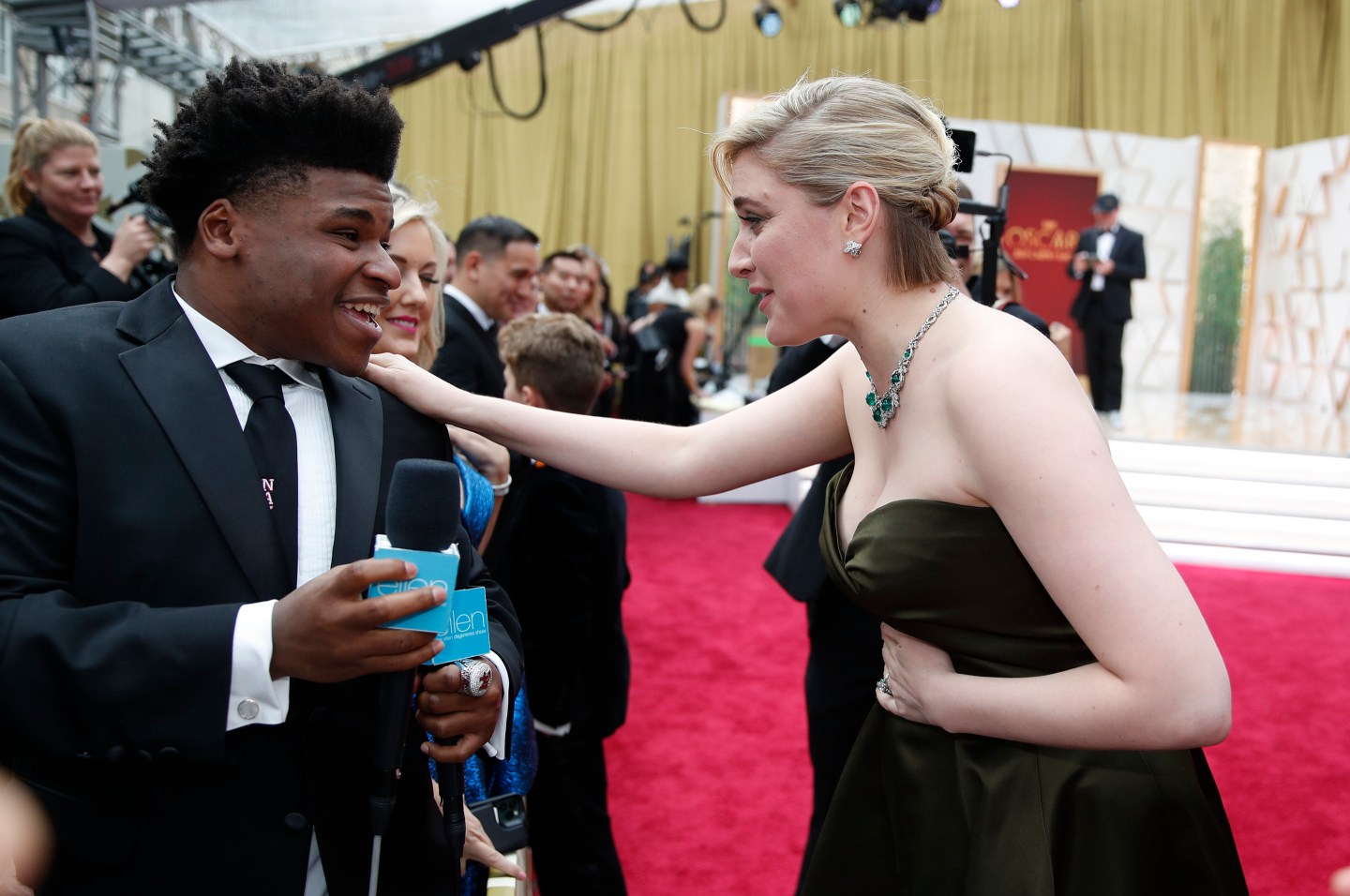 In this Feb. 9, 2020 file photo, Greta Gerwig, right, talks to Jerry Harris on the red carpet at the Oscars at the Dolby Theatre in Los Angeles. Harris, the star of the Netflix documentary series “Cheer,” was arrested Thursday, Sept. 17 on child pornography charges.
John Locher—AP File Photo

Jerry Harris, the star of the Netflix documentary series “Cheer,” was arrested Thursday on felony charges of production of child pornography, three days after twin boys filed a lawsuit alleging he sent them sexually explicit photos of himself and cornered one of them in a bathroom and begged for oral sex.

According to the complaint, Harris admitted during an interview after FBI agents raided his home Monday that he had asking one of the teens to send him photographs and videos of his penis and buttocks on Snapchat. He also admitted that he repeatedly asked the teen, identified only as Minor 1, between December 2018 and March of this year for such photographs and videos.

Further, according to the complaint, Harris admitted to requesting and receiving on Snapchat child pornography from “at least between 10 to 15 other individuals he knew were minors.”

FBI agents were photographed Monday coming out a home in the Chicago suburb of Naperville that USA Today, which first reported the suit, reported was Harris’ home.

The boy’s mother told the newspaper that both of her sons had spoken to the FBI, and the lawsuit alleges that she also reported the allegations to Fort Worth police, the FBI and others. The complaint contends that the mother contacted authorities after she saw messages from Harris on one of her son’s cellphones.

Harris, 21, was the breakout star of the show that followed the cheerleading team from Navarro College in Corsicana, Texas, as it sought a national title.

Harris did not respond for comment from USA Today, and attempts by The Associated Press to find a phone number for Harris have not been successful.

In interviews with USA Today at their Texas home, the boys — who are now 14 years old — described a pattern of harassment both online and at cheer competitions, which began when they were 13 and Harris was 19. They said it continued for over a year.

Besides accusing Harris of sexual misconduct, the lawsuit alleges that cheer organizations failed to protect the boys. The organizations named in the lawsuit are U.S. All Star Federation, which governs competitive cheerleading; Varsity Spirit, which puts on competitions; and the Cheer Athletics, a chain of gyms.

A Varsity official in Aug. 1 letters to police in Florida and Texas said the organization had learned of “inappropriate sexual conduct” allegations against Harris, USA TODAY reported.

“Cheer” was an instant success when it was released in January, and Harris drew fans for his upbeat attitude and his encouraging “mat talk.” Earlier this year, he interviewed celebrities on the red carpet at the Academy Awards for “The Ellen DeGeneres Show.”