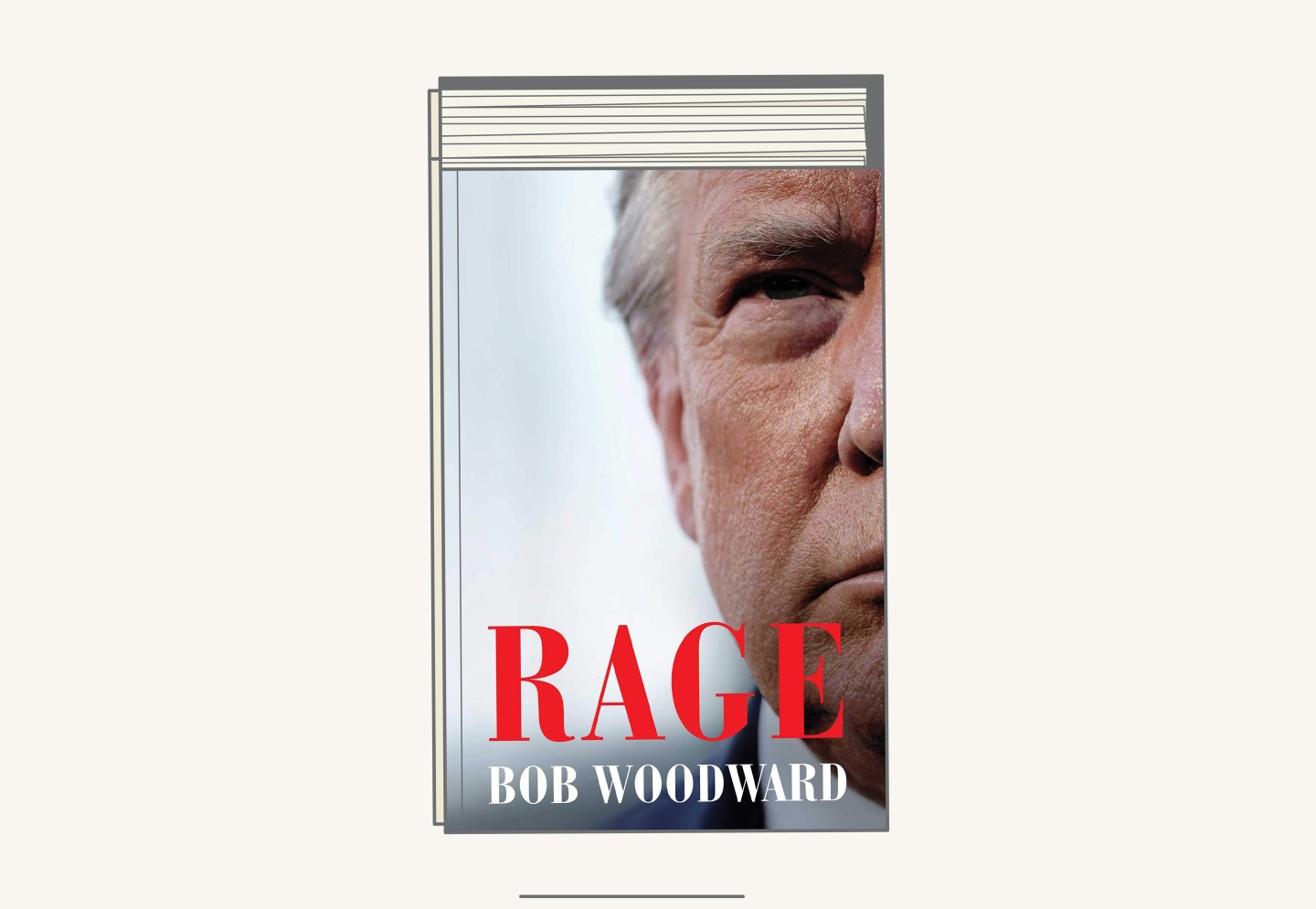 'Rage' is the latest book from journalist Bob Woodward, the author of 13 number-one bestsellers, including 'Fear: Trump in the White House.'
Courtesy of Simon & Schuster

Bob Woodward has done it again. The legendary journalist who (along with former Washington Post colleague Carl Bernstein) broke the Watergate scandal that brought down the Nixon presidency—and has since become a prolific author of books documenting presidential administrations—is set to release Rage, his second volume on the Trump White House. (The first, Fear: Trump in the White House, was published in 2018.)

And this one looks to be a doozy—with revelations that could potentially influence public opinion of the president ahead of November’s election.

Excerpts from Rage have emerged today ahead of the book’s publication on Sept. 15, and they offer fascinating—and, in some cases, extraordinary—details from 18 interviews that Woodward conducted with the President, as well as conversations with administration sources. Among the revelations to emerge include a startling admission from Trump about his handling of the coronavirus pandemic, his thoughts on race relations and America’s military leadership, details about his relationship with North Korean dictator Kim Jong-un, and damning observations from former high-ranking administration officials about the Trump presidency.

Here’s some of the reportage that is already making headlines.

Perhaps the most inflammatory piece of news to emerge from the Rage excepts is Trump’s admission that he willingly tried to minimize the danger posed by the then-rapidly spreading coronavirus—a disease that has since gone on to kill nearly 200,000 Americans.

“I wanted to always play it down,” Trump told Woodward on March 19, mere weeks after he told reporters that the COVID-19 was eventually “going to disappear… like a miracle.”

Whatever the president was telling the public, Woodward’s book makes apparent the fact that he was fully briefed and aware of the threat presented by the highly infectious, airborne disease. At a top secret intelligence briefing in late January, national security adviser Robert C. O’Brien told Trump that COVID-19 would “be the biggest national security threat you face in your presidency.”

Trump acknowledged as much to Woodward on Feb. 7, describing the virus as “more deadly than even your strenuous flu”—even while he publicly declared COVID-19 as no more harmful than the seasonal flu. “This is deadly stuff,” he told Woodward at the time.

Still, despite recognizing the danger of a potentially lethal virus that “goes through the air,” Trump continued to evade calls for him to promote the use of face masks, and kept holding campaign rallies as late as early March.

On June 19—with the nation in the midst of the largest protest movement since the 1960s, and facing a reckoning on police violence and racial justice in the wake of the killing of George Floyd—Woodward asked Trump about white privilege. As white men of the same generation, both with privileged upbringings, surely Trump could understand his advantages and the need to “understand the pain and anger” felt by Black people.

“No,” Trump replied to Woodward. “You really drank the Kool-Aid, didn’t you? Just listen to you. Wow. No, I don’t feel that at all.”

Trump went on to note economic metrics, such as the unemployment rate among Blacks, in reiterating that he has done more for Black people than any president since Abraham Lincoln. In a later conversation, he told Woodward: “I’ve done a tremendous amount for the Black community. And honestly, I’m not feeling any love.”

Trump describes his ‘f—ing generals’ in lewd fashion, while top officials had their own reservations about the President

The president does not parse words in criticizing a military leadership that serves under him as commander-in-chief.

“Not to mention my fucking generals are a bunch of pussies,” Trump once told White House trade adviser Peter Navarro, according to Woodward. “They care more about their alliances than they do about trade deals.” This despite the fact that trade negotiations, of course, are outside the purview of the U.S. military.

The exasperation, according to Woodward, was mutual among the likes of former defense secretary and retired general Jim Mattis and former director of national intelligence Dan Coats. Such were Mattis’s concerns that he reportedly visited Washington National Cathedral to pray for the nation’s fate under Trump’s leadership, while also telling Coats: “There may come a time when we have to take collective action” against a “dangerous” and “unfit” president who “has no moral compass.”

Coats, likewise, reportedly agreed with Mattis, saying: “To [Trump], a lie is not a lie. It’s just what he thinks. He doesn’t know the difference between the truth and a lie.” And so perplexed was Coats about Trump’s deference to Russia, that he reportedly had “deep suspicions” that Vladimir Putin “had something” on the President.

Also quoted in the book is Dr. Anthony Fauci, who has seen his recommendations as the top infectious disease expert guiding the government’s response to COVID-19 constantly undercut by the administration’s actions. Fauci reportedly described Trump’s leadership as “rudderless” and his attention span as “like a minus number,” adding: “[Trump]’s sole purpose is to get reelected.”

Woodward reports extensively about President’s unorthodox relationship with the North Korean dictator, whom he once derided as “little rocket man.” But the pair have since patched things up—as evidenced by the 27 letters they have exchanged over the course of Trump’s presidency.

Woodward reports that the letters are filled with flattering language between the two leaders, with Kim repeatedly calling Trump “Your Excellency” and describing him as a “a powerful and preeminent statesman.” Kim also wrote of the pair’s historic meetings as a “precious memory” that established a “deep and special friendship between us.”

The flattery apparently worked, as Trump boasted to Woodward of Kim’s deference to him and described the North Korean dictator as “far beyond smart.” Trump also brushed off concerns that he had ceded too much leverage to Kim as a result of their relationship, telling Woodward that the CIA has “no idea” how to handle North Korea.

Still, tensions between the two countries rose to the point that there were genuine concerns among some in the administration about an armed conflict between the U.S. and North Korea. And in discussing those tensions, Trump apparently spilled the beans on a heretofore undisclosed, newly developed weapons system.

Alice in Wonderland is the key to understanding the Trump presidency, according to Jared Kushner

Kushner, the president’s son-in-law and one of the most influential figures inside his administration, is said to be quoted extensively in Rage. In the book, Woodward quotes Kushner as pointing to Alice in Wonderland—Lewis Carroll’s classic 19th century fantasy novel-turned-1951 Disney animated film—as an important text in understanding Trump and his presidency.

Kushner paraphrased the Cheshire Cat, in particular, as a particularly apt guide to grasping the haphazard mechanizations of the administration: “If you don’t know where you’re going, any path with get you there.”