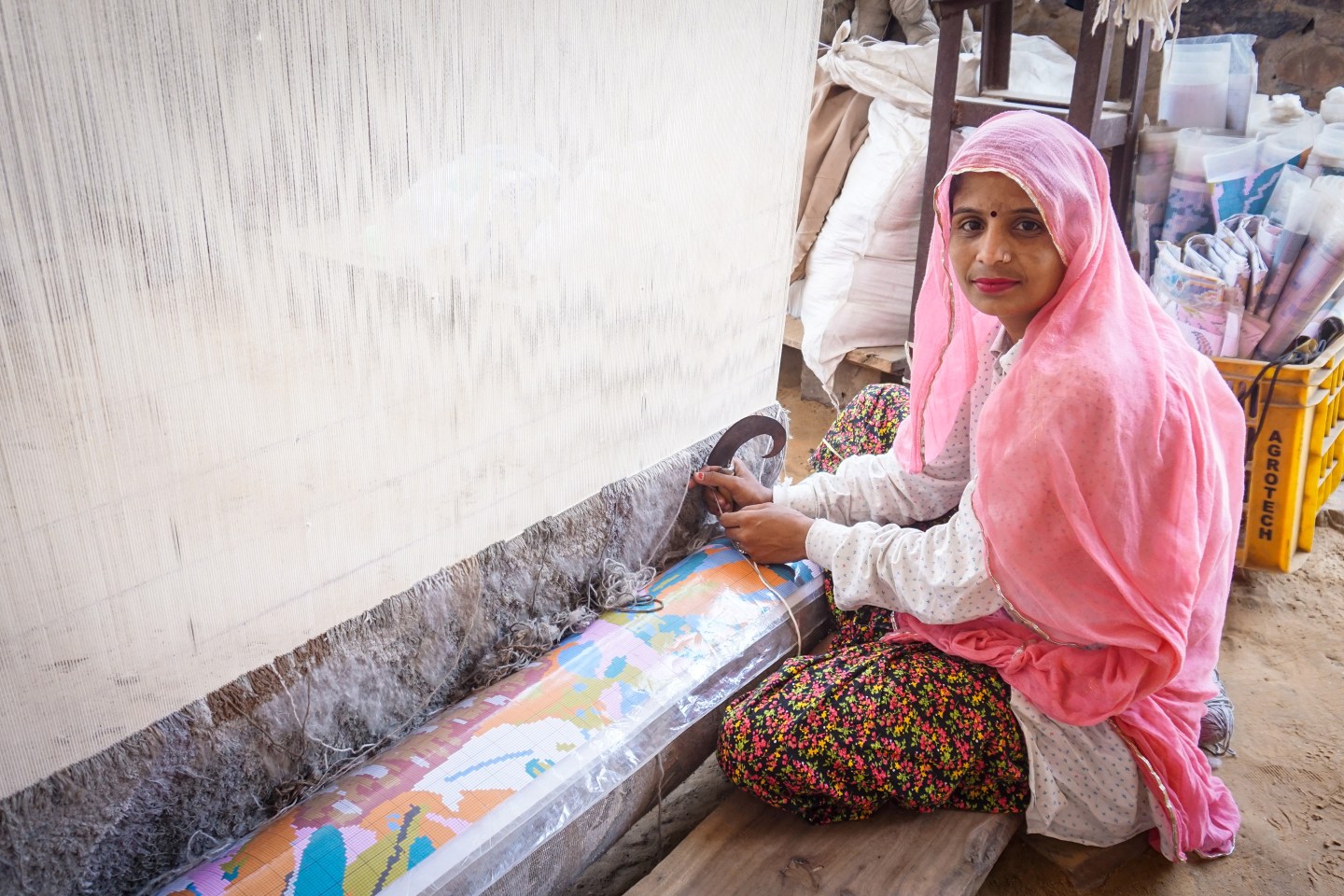 An employee of Jaipur Living handknots a rug in Rajasthan, India. The artisan industry, which emphasizes remote work, offers lessons for how to reshape the post-COVID economy, writes Rebecca van Bergen.
Courtesy of Nest

The onset of COVID-19 prompted billions of workers to shift their work life to their home offices for the first time, introducing a new working style. Yet as a large part of society globally faces this apparently radical and sudden shift in how we live and work, we must remember that home-based work has existed in emerging economies, and right here in the U.S., for centuries.

One of the largest home-based industries is the artisan sector. It doesn’t just manufacture touristy trinkets. This is a complex web of supply chains that fulfills the needs of the world economy: The global handicrafts market was valued at $526 billion in 2017 and is estimated to be at $984 billion by 2023. Estimates are hard to come by, but according to research by Neelam Gupta, there are as many as 300 million home-based workers around the globe.

This is a world of mostly women primarily working with their hands: sewing soles on shoes, adding pom-poms to the tops of winter hats, stringing tiny seed beads onto mass market jewelry, making the tassels that adorn everything from clothing to pillow covers. But despite the prevalence of this work in our everyday consumption, the majority of us hardly know these workers exist!

All of these tasks are tended to by human hands in a supply chain that extends into their homes. As we navigate how to move forward during this pandemic, the artisan community worldwide has some valuable lessons on what the future of work can—and should—look like.

We often think of artisanship as a thing of the past. But in many ways it is the future. At a time where there is an urgent call to bring Black, Indigenous, and people of color (BIPOC) voices to the table, the cottage industry model—already perfected by Black, brown, and Indigenous communities for centuries—could help suggest a new way of work.

Our global and radical shift to remote work was prompted by a universal concern for health and safety. As workers everywhere sheltered in place, they did so in a shared effort to flatten the coronavirus curve and keep their communities healthy. Yet workplace concerns related to health and safety have been felt by the artisan sector long before COVID-19, and with good reason. In a pandemic, it’s clear that social distancing is not possible in a traditional factory setting. But these cramped quarters have led to health hazards for years.

Nest has been working with artisans for the past 14 years, connecting their handmade creations with markets and businesses that can pay them what they’re worth. When I started Nest, I visited countless communities around the world where men and women worked from home, tending to their children and to their craft. Some were compensated fairly for their creations. Most were not.

That’s why we spent the past decade helping companies not only source from artisan groups, but also create structures and frameworks for these transactions. This led us to the Nest Ethical Handcraft Program, which uses a matrix of over 100 standards to determine fair wages, safe working environments, and representation in decision-making for artisans.

As consumer demand for handicrafts continues to grow, we’ve been able to help solidify an artisan economy that works almost entirely from homes or small community workshops—and to provide the needed transparency to make sure this work is safe. For women, especially, this has been a saving grace: They can work from home, skip long commutes to a factory, and meanwhile tend to their families. This is also particularly helpful in communities where gender discrimination and abuse are still rampant.

As the world wakes up to the power of remote work, consumers and peer companies need to recognize that it’s not just a matter of convenience, but a productive and resilient approach to work that could inform international development efforts as well as community revitalization right here at home.

So what does this actually look like in practice? Nest has been working since 2017 with Jaipur Living, a company that produces rugs for contemporary brands here in the U.S. Jaipur works with rug weavers all over India where home-based work is the norm. Husbands and wives sit alongside each other working. Babies are cradled in the mother’s lap as she takes on the rhythmic movements of the loom. When the midday sun gets too hot, they take a break, eat lunch, and rest. Work resumes in the evenings in the summer months, when it’s more tolerable to sit out at the loom. These are small, simple adjustments to life. But they have a profound impact on the workforce.

Jaipur is able to manufacture without the heavy infrastructure of factories. Its team does not have to endure exhausting commutes. All of this, of course, results in a lighter carbon footprint for the artisans themselves and for the company as a whole.

For women, the benefits extend beyond family life. Working in countries where women can face harassment, abuse, or violence on their way to and from work, this option of remote work allows them to be more comfortable and in control of their safety and well-being.

Making a rug is a lengthy task, close to 100 steps from the spinning of wool to the final tassels. If Jaipur Living can do it almost entirely with a rural workforce, why can’t other companies build a similar grass-roots system?

Consumers and brands and governments need to talk about and recognize the role home-based work has in the global economy and draw it out from the shadows. For those of us in the West, we need to look at the so-called gig economy through a new lens.

In fact, during the pandemic, artisans working from home all over the world—from El Salvador to India to right here in the U.S.—were nimble and resourceful enough to be able to pivot quickly to using their skills to make masks. In Seattle, the Refugee Artisan Initiative (RAI) helps refugee and immigrant women find employment. When the lockdown went into effect, Ming-Ming Tung-Edelman, the founder of RAI, put many of the RAI women to work producing cloth masks from home. Since March, the group has made over 40,000 masks, and has also employed some of their husbands (who had seen work disappear as Uber drivers or gig workers) to transport materials to various artisans’ homes. These masks have been donated to health care workers, inmates, and low-income seniors in Seattle’s Chinatown neighborhood.

Finally, there’s perhaps the most compelling reason to embrace home-based work: Many people prefer it. More than three-quarters of the artisans interviewed reported that they preferred working from their homes, according to a study by Nest, Save the Children Germany, and CCR CSR, an anti–child labor organization. Similarly, during this pandemic, three out of five Americans say that they would rather continue to work remotely, yet labor law (here in the U.S. and around the world) and corporate policies have yet to catch up.

So is it finally time for modern economies to embrace what we’ve long known? As Nahla Valji, senior gender adviser to the secretary-general of the United Nations, aptly shared, “Our formal economy is only possible because it’s subsidized by women’s unpaid work.” Remote work can, and does, work. But it must be formalized, visible, and protected.

For women and people from minority communities who until now couldn’t get to a job because of family responsibilities, the strenuous trek to work, or fear for their own safety, the post-COVID transition could be the pathway to greater economic freedom and peace of mind. Surely there will be exceptions. But it’s finally time to look beyond the cubicle or factory floor.