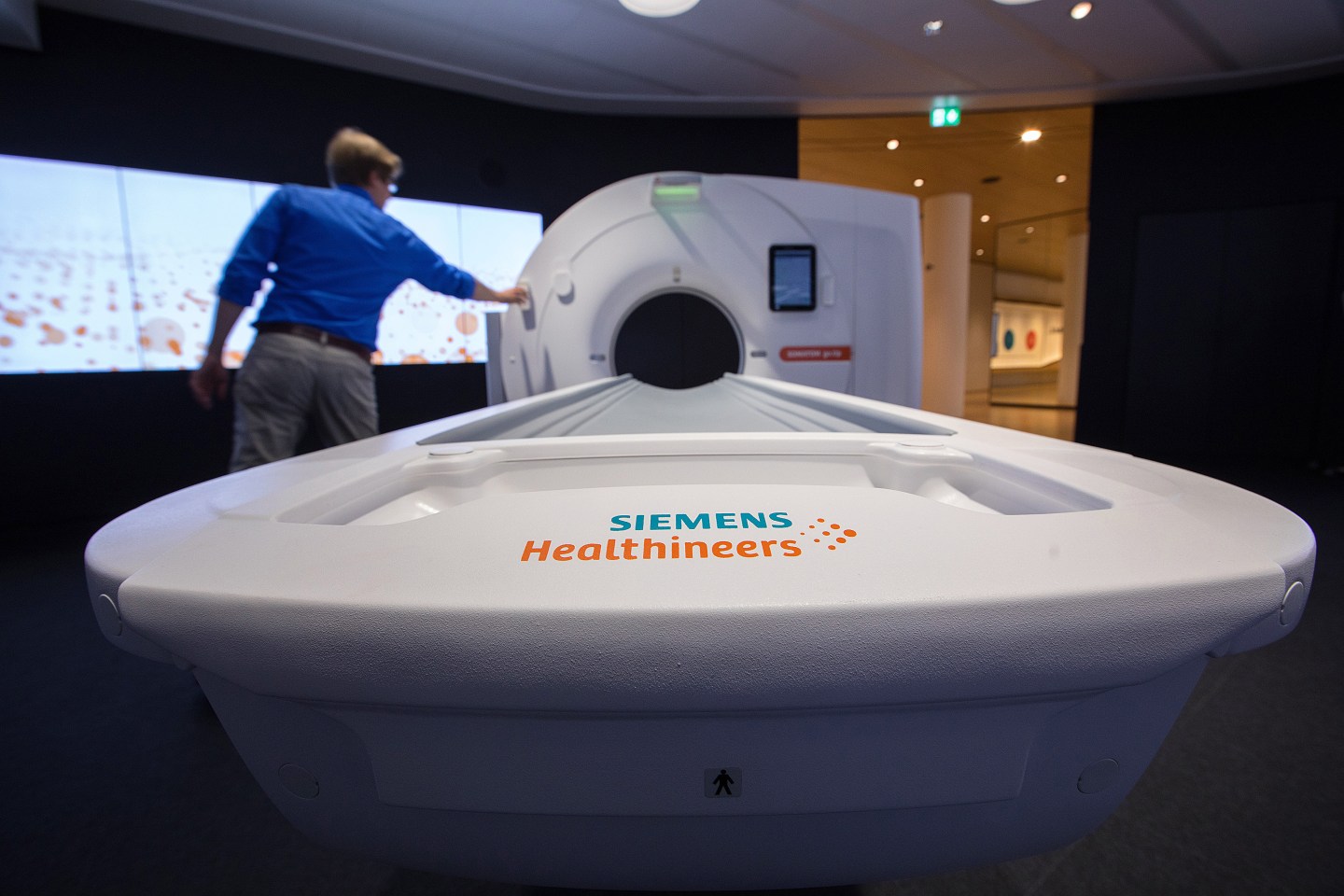 FILE: An employee stands beside a Siemens Somatom computerized tomography (CT) scanner machine inside the Siemens AG Healthineers showroom in Forchheim, Germany, on Wednesday, July 19, 2017. Siemens AG will press ahead with an initial public offering of its health-care unit, Siemens Healthineers, as Chief Executive Officer Joe Kaeser unloads another key business at Europes largest engineering company. While Siemens didnt give details on the size of the sale, its likely to be one of the biggest equity offerings ever in Germany. The IPO will be completed in the first half of the year on the Frankfurt Stock Exchange, subject to market conditions, the Munich-based company said in a statement. Our editors select the best archive images ahead of the IPO. Photographer: Krisztian Bocsi/Bloomberg via Getty Images
Krisztian Bocsi—Bloomberg/Getty Images

Siemens Healthineers agreed to buy Varian Medical Systems for about $16.4 billion in cash in the biggest medical acquisition of the year.

The German medical technology company offered $177.5 a share for the Palo Alto, California-based business, 24% more than its closing price on Friday. The bid will be financed through both debt and equity, Siemens Healthineers said in a statement on Sunday. Bloomberg was first to report the offer on Saturday.

The deal would give Healthineers a sizable market share in the rapidly growing field of cancer treatment where it has little presence currently. Siemens Healthineers said the purchase will a have a positive effect on earnings per share withing the first 12 months of the closing.

The acquisition comes amid early signs of a pickup in deals after the spread of the coronavirus and a worsening economic outlook damped sentiment this year. Deal activity in the medical devices industry is also on the rise, with Thermo Fisher Scientific Inc.’s proposed acquisition of Qiagen NV for more than $10 billion and Smiths Group Plc mulling the sale of its medical equipment unit.

The purchase will bring together two partners that have collaborated for more than a decade in areas such as radiotherapy diagnostics for cancer treatments.

Varian recently traded at 38 times estimated earnings, compared with a multiple of 18 for the S&P 500 Health Care index. The company’s shares are little changed this year, compared with a 3.4% advance in the S&P health index, leaving Varian with a market value of about $13 billion.

Healthineers will finance the acquisition through a 15.2 billion-euro ($17.9 billion) bridge loan from Siemens AG, followed by a capital increase this year that the parent company will not participate in.

As a result, Siemen’s stake in Healthineers will decline to about 72% from 85%, Siemens said in a statement. The planned dilution of Siemens’s holding could pave the way for Healthineers to enter into Germany’s benchmark DAX Index.

Healthineers will look at possible inclusion next year, Chief Financial Officer Jochen Schmitz said in an interview. The Index has seen more turmoil than usual recently, with the exit of Lufthansa AG after 32 years, and Commerzbank AG.

“It won’t be a short-term topic, but one we can look at next year,” Schmitz said.

Healthineers, which spun off from Siemens in 2018, has advanced 2.7% this year, boosting its market capitalization to 43.6 billion euros. Revenue in the third quarter was 3.31 billion euros while earnings before interest and taxes reached 461 million euros, the company said Sunday. The company also expects full-year earnings per share of between 1.54 euro and 1.62 euro, compared with 1.57 euro last year.

Chief Executive Officer Bernd Montag said at the end of 2019 that the company’s next acquisition would be “close to home.” “We’re not going to start doing, like, pacemakers, because it does not fit into our portfolio,” Montag said in an interview at the time.