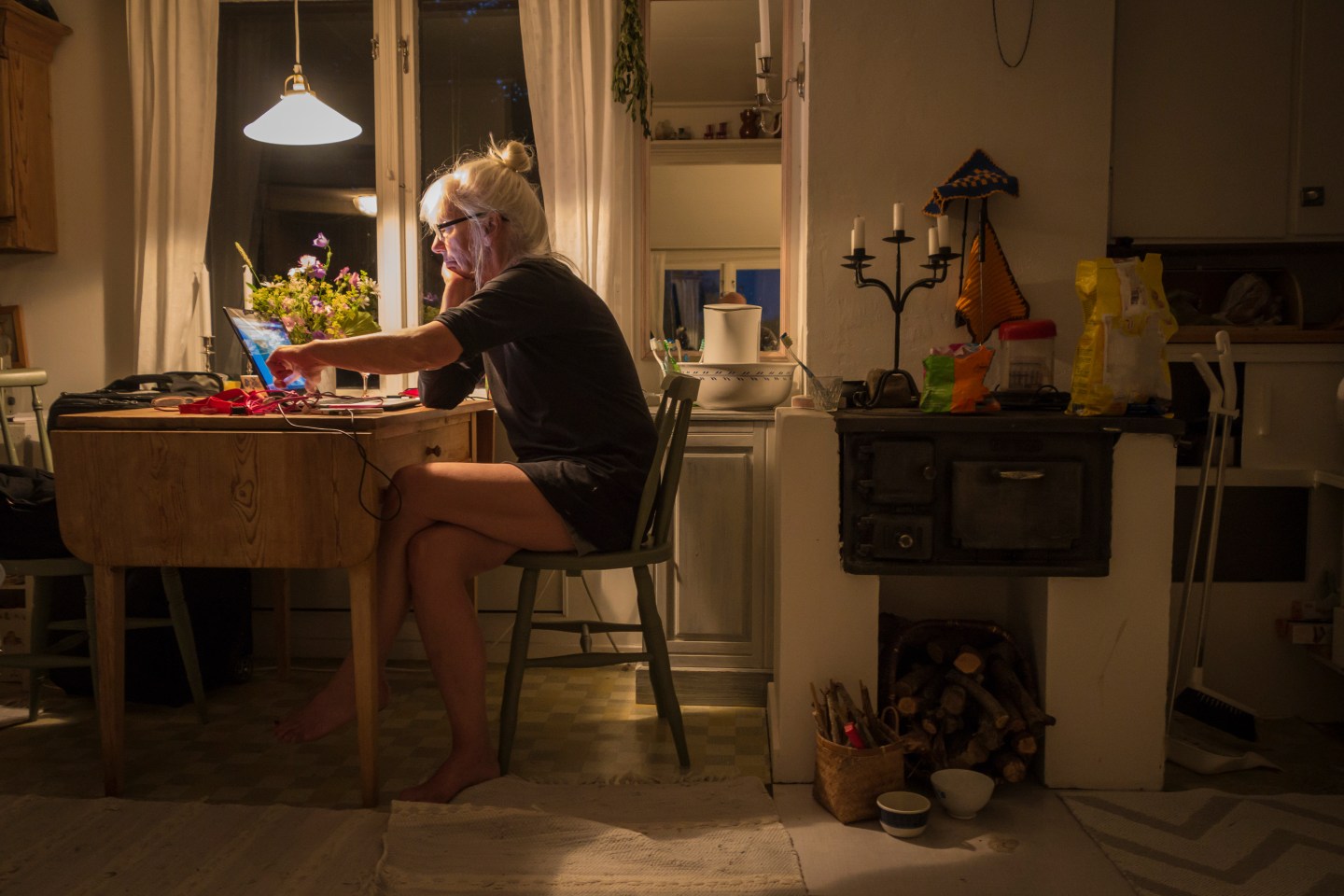 Remote working from home, which is up during the coronavirus pandemic, poses serious dangers for employers and employees, writes Laura Vanderkam.
Jan Hakan Dahlstrom—Getty Images

A few years ago, when I, as an outside consultant, was leading a time management workshop at an all-virtual company’s in-person annual retreat, I noticed something: these people were working a lot. Time logs chronicled late night email sessions. One employee—who’d mentioned wanting more time to play with her dog—had hired a dog walker because, despite working from home, she didn’t think she could take a break to go outside with her pet. As I began doing workshops with more all-virtual companies, I noticed this same phenomenon. Many remote workers had no boundaries protecting non-working time. Needless to say, their stress levels reflected this.

I was thinking of that forlorn dog owner as the COVID-19 pandemic forced whole organizations to go virtual overnight in March. Remote work has grown rapidly—up 159% in the last 12 years, per an early 2020, pre-lockdown report from FlexJobs—but there’s long been resistance to it. Push managers for an explanation and you’ll eventually get some version of this: How do I know people won’t watch Netflix all day?

But Netflix isn’t the real danger. The real danger is that without a physical separation between work and the rest of life, people won’t ever stop working—risking burnout, which has huge costs for employees and their organizations. Wise managers address this, rather than worrying that people will slack the second they aren’t being watched.

It’s hard to quantify this fear of slacking, but consider this: One Gallup poll in mid-March found that only 31% of U.S. workers had ever worked remotely, despite a majority of workers saying in various polls that they would like to do so occasionally. By the beginning of April, the proportion of workers who’d ever worked from home had risen to 62%. Clearly, many more jobs could be done from home than were.

This fear of slacking is also reflected in which work-from-home requests are granted. I’ve studied thousands of time logs over the years for my books and time diary projects, and I found that, pre-COVID, Friday was by far the most common work from home day. When people ask to work from home one day a week, Friday is generally the day managers agree to. One survey from Accountemps found that Friday is seen by HR managers as one of the least productive days of the week. I don’t think this isn’t a coincidence. If we assume that people who are working from home aren’t really working, best to minimize the opportunity cost.

I wish the pandemic had removed this fear, but even after COVID sent everyone home, I began hearing from listeners to my podcast (which is about working from home) that a number of teams began doing daily check-ins at 9:00 a.m., making sure everyone was at their desks.

Employees are aware of this suspicion. And so there is a tendency to leave Slack open all day, respond to emails instantly, and skip breaks, lest anyone think silence implies the binge watching of Stranger Things. With no commute, people don’t know when to declare the day done, and so they half work into the night. Long hours with no breaks are pretty closely linked to burnout. One poll finds that burned out employees are 2.6 times as likely to be actively seeking a different job, and 63% are more likely to take a sick day.

But this lack of boundaries isn’t inevitable. When I was reviewing time logs from employees at all-virtual companies as a time management consultant, I noticed that people with children or other caregiving responsibilities were far better at creating a stopping point, which makes sense. Someone has to send a sitter home or pick up the kids from day care.

Wise managers can encourage people without kids to come up with other personal commitments that end the work day. Years ago, when I realized that I was half working and half surfing the web until 10 p.m. every night, I joined three community choirs. On Mondays, Tuesdays, and Thursdays, I had to stop work around 6 p.m. to go to rehearsals. I became much more efficient—and happier.

Of course, choirs might be out these days, but here’s an idea. Any organization that institutes a 9:00 a.m. virtual check-in needs to also have a 4:45 p.m. virtual goodbye ceremony. This gives people a stopping point so they live to march again the next day—and maybe spend some time with their dogs too.

Laura Vanderkam is author of The New Corner Office: How the Most Successful People Work From Home, which publishes on July 21, as well as Off the Clock: Feel Less Busy While Getting More Done and Juliet’s School of Possibilities. She speaks about time management and productivity for organizations across the U.S. and Canada.