With approval ratings at an all-time low, Putin is making moves to stay in power until he’s 83 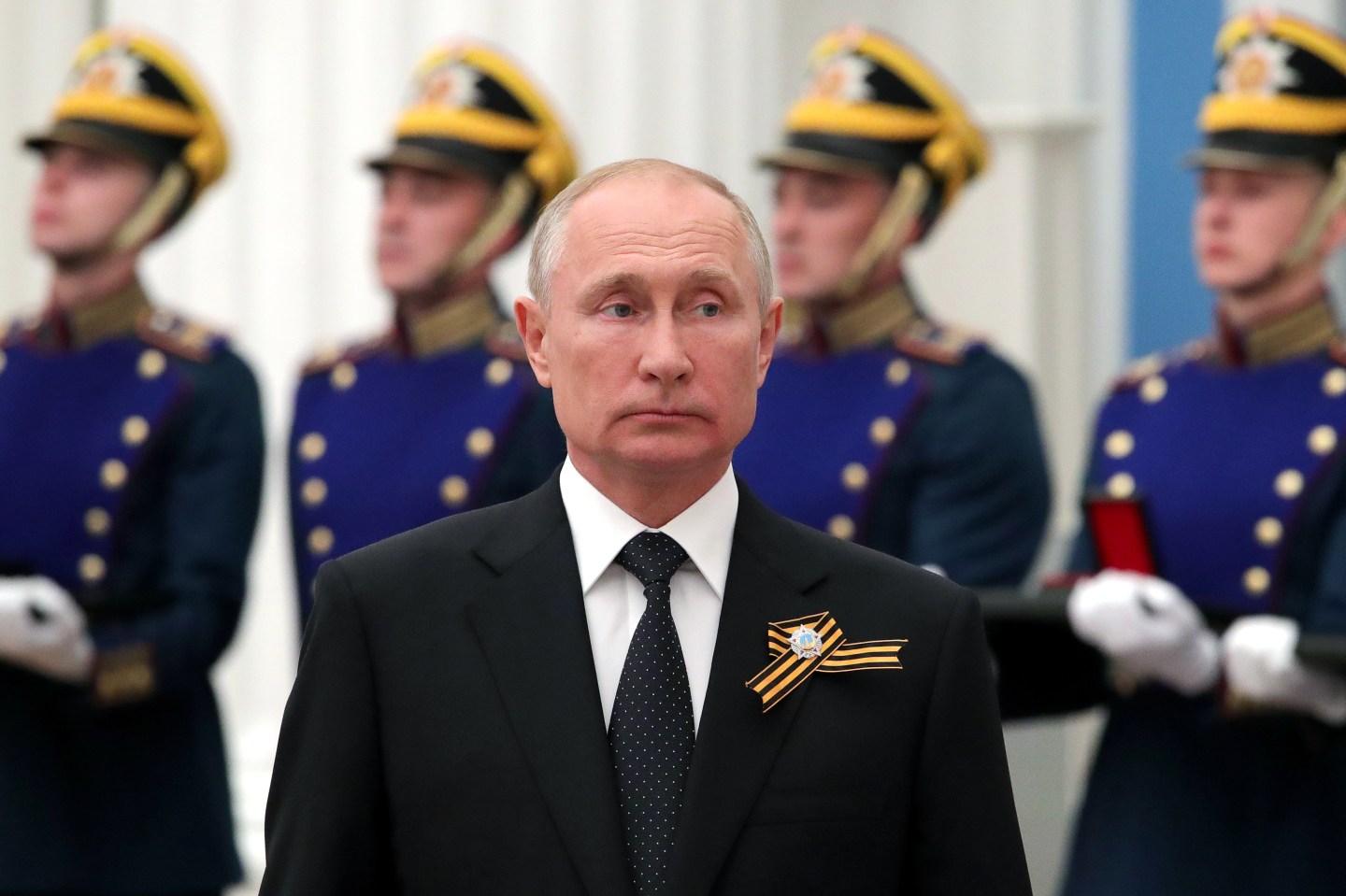 After two decades in power, Vladimir Putin’s approval ratings are at an all-time low as Russia’s economy reels under the impact of the coronavirus epidemic and the slump in oil prices. What better time for him to seek to extend his presidency for potentially 16 more years?

It’s a measure of how tightly Putin has controlled the operation to amend Russia’s constitution that there’s little suspense about the result of a referendum on the changes, despite the economic pain unleashed by the virus. Approval in the vote that concludes July 1 will allow him to seek two more six-year terms after his present one ends in 2024, staying in power until 2036, when he’d be 83.

Still, amid rising public discontent, officials are pulling out all the stops to ensure a high turnout in a vote Putin wasn’t obliged to call. While a simple majority in favor and a turnout exceeding 50% of eligible voters is all that’s required, the Kremlin won’t be happy with anything less than an overwhelming endorsement. It’s sought to woo Russians with populist sweeteners such as an effective constitutional ban on gay marriage.

“People are disenchanted with the ‘presidential republic’ and iron fist they believed in 20 years ago,” said Sergei Belanovsky, a Moscow sociologist who helped to produce polling that predicted the biggest protests of Putin’s rule in 2011-2012 and is now tracking a renewed increase in negative attitudes toward the leadership of the country.

Putin caught even many in his inner circle by surprise in January when he announced plans to carry out the most extensive reform of the constitution since it was adopted in 1993. But the clause allowing him to sidestep term limits didn’t appear until March, even if many officials later suspected that had been his plan all along.

Putin is already the longest-serving leader of the world’s largest country by landmass since Soviet dictator Josef Stalin. After a 2018 backlash over a pension-age increase, the former KGB colonel has found it harder to maintain public support as falling living standards stir increased resentment.

His popularity rating at 59% – though still respectable by western standards – is the lowest since he became president in 2000, and has fallen to the level of regional governors whom Putin routinely used to out-poll, according to the Levada Center, an independent pollster in Moscow.

Putin, who delegated the main responsibility for combating the spread of Covid-19 to regional chiefs, has seen his ratings fall because of people’s unhappiness at the current economic crisis, said Levada analyst Denis Volkov. At the same time, the authorities for now remain in greater control than they were at the time of the mass demonstrations almost a decade ago with most Russians still hopeful the country will emerge from the crisis, he said.

After years of stagnation, Russia’s economy may shrink by 6.6% this year, the worst contraction since 2009 in the wake of the global financial crisis, according to the International Monetary Fund. Growth has averaged under 2% in the past decade, far down on the more than 7% annual expansion that helped incomes soar during Putin’s first two terms as president. The Russian central bank sees little room for improvement in coming years without structural reform.

Real incomes are falling after stagnating over the past six years, while unemployment climbed to 6.1% in May from 4.7% in March.

Putin stirred patriotic sentiments before the referendum with a massive military parade in Red Square on June 24 to mark the 75th anniversary of the defeat of Nazi Germany in World War II, a commemoration delayed by the virus from May 9. He also sought to win over ordinary Russians on the eve of the vote by unveiling fresh cash payments for families and the unemployed and a tax increase for the rich.

Levada’s latest poll conducted late last month showed fewer than half of people support the constitutional reform. State employees are being pressured into voting, according to election monitoring group Golos, which said that the use of large-scale online voting for the first time and the week-long balloting process made it harder for independent observers to uncover any violations.

State pollster VTsIOM puts support for Putin at a much higher level, reporting trust in the president ranging between 66% and 73% in 2020. It published a June 23 forecast showing between 67% and 71% of voters will back the amendments in the referendum.

The authorities’ calculation is that people, whatever their reservations, will mostly rally behind at a time of national crisis out of recognition that the government offers a sense of security, said an official with knowledge of Kremlin political planning.

Belanovsky, the sociologist, said his most recent research of public opinion conducted this month shows that a majority supports aspects of the constitutional changes aimed at upholding traditional values but only a minority backs Putin’s wish to reset his term limits to zero at the end of his current mandate.

Interviews with focus groups from March to May have pointed to a sharp sense of disillusionment both with the president personally and the government as a whole, according to Belanovsky. People are angry about falling living standards, corruption and a lack of help from the authorities to counter the economic fall-out of the lockdown during the pandemic, he said.

VTsIOM’s head Valery Fyodorov dismissed Belanovsky’s research as “pseudo-polling” that is “not based on scientific sampling” in a commentary on Wednesday.

Putin’s rule has become “far less legitimate,” according to Tatiana Stanovaya, head of R. Politik, a political consultancy. “Social dissatisfaction is building up, but we won’t see the consequences until later.”