That missing $2.1 billion in Wirecard’s accounts? It probably ‘does not exist,’ the company now says 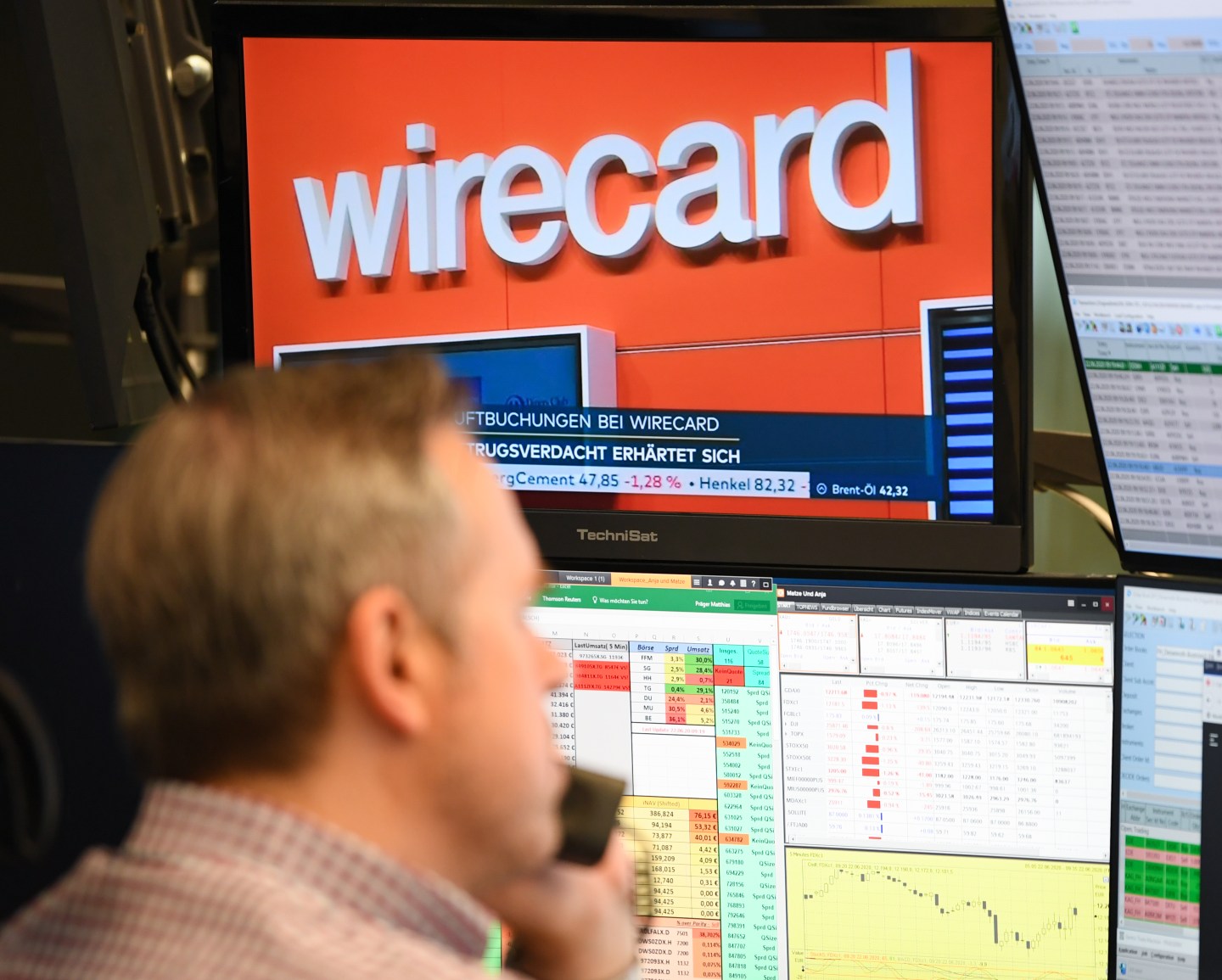 The accounting scandal surrounding payment service provider Wirecard dragged its shares even deeper into the downward spiral on Monday. In early trading, they lost a further almost 38 percent to 15.10 euros, after having already slumped by up to 82 percent on Thursday and Friday. Wire photograhy: Arne Dedert—picture alliance via Getty Images
Arne Dedert—picture alliance/Getty Images

Wirecard AG was left fighting for survival after acknowledging that 1.9 billion euros ($2.1 billion) that it had reported as assets probably don’t exist, deepening an accounting scandal that has rattled Germany’s financial industry.

The payments processor said it’s in discussions with creditors and considering a full-scale restructuring after pulling its financial results for fiscal 2019 and the first quarter of 2020. Previous descriptions of its business with third parties, which process transactions on Wirecard’s behalf, were “not correct.”

Even before the early Monday statement, the unfolding scandal had seen Wirecard’s shares and bonds collapse, its chief executive depart, and left the company renegotiating debt terms with its lenders. In less than a week, the fintech once hyped as the future of German finance has lost almost 90% of its market value, with the shares slumping for a third trading day on Monday.

“It’s a complete disaster we’re looking at,” said Felix Hufeld, head of BaFin, Germany’s top financial regulator, at a panel discussion Monday. “It’s a shame that something like that happened.”

Wirecard said it was in “constructive discussions” with its lending banks, including the extension of lines coming due at the end of June. It is working with investment bank Houlihan Lokey on a sustainable financing strategy. Also under consideration are cost reductions, a restructuring, and disposal or termination of business units and product segments, according to the statement.

“There is a prevailing likelihood that the bank trust account balances in the amount of 1.9 billion euros do not exist,” Wirecard said. The firm had repeatedly delayed announcing its financial statements, and last week warned that loans of as much as 2 billion euros could be terminated if its audited annual report wasn’t published by June 19.

Moody’s Investors Service decided on Monday to withdraw Wirecard’s credit ratings because it “believes it has insufficient or otherwise inadequate information to support the maintenance of the ratings.” It had already cut the ratings six levels on Friday, putting it one step from the lowest tier of junk.

Read more on how Wirecard became an embarrassment for Germany

Wirecard fell as much as 50% and traded 38% lower at 12:35 p.m. in Frankfurt. The stock has lost 85% since Wednesday, the day before it revealed that the funds were missing.

Wirecard’s lenders are demanding more clarity from the company in return for the extension of almost $2 billion in financing after it breached terms on the loan, people familiar with the matter said earlier. At least 15 commercial lenders, including Commerzbank AG and ABN Amro, are in hectic negotiations about the steps to take, they said.

The missing cash “could trigger an event of default and allow creditors to withdraw lines of credit,” said Justin Tang, head of Asian research at United First Partners in Singapore.

Wirecard has an outstanding revolving credit facility of 1.75 billion euros, according to data compiled by Bloomberg. About 90% of the RCF has been drawn by the company, according to people familiar with the matter and a list detailing the facility’s participation that was seen by Bloomberg:

It’s unclear how the latest admissions will affect discussions with the banks. Most are leaning toward an extension of the repayment obligation in order to better assess the potential impact of a default on their balance sheets, one of the people said. However, a prolonged extension could be seen as delaying an insolvency, which is illegal under German law.

The scandal has prompted the resignation of Markus Braun’s after almost two decades as CEO. He was replaced on an interim basis by James Freis. Braun is unwinding a large portion of the shares he owns in the company, a stake he financed by borrowing against the stock’s value, Bloomberg has reported.

Read more on how Braun has to unwind pledged shares

The deepening mystery over the lost money centered on two Philippine lenders, after Wirecard said a couple of unnamed Asian banks had been unable to find accounts with the cash.

Both the Bank of the Philippine Islands and BDO Unibank Inc. said Wirecard wasn’t a client and they hadn’t seen the money. None of the missing cash entered the Philippine financial system, according to the nation’s central bank, which is conducting its own investigation.

A document purporting to show a link between Wirecard and BPI was “bogus” and may be part of an attempted fraud, the bank’s President Cezar Consing said Friday. BDO Unibank CEO Nestor Tan said it was a matter of “document fraud which was subsequently clarified by the bank as spurious.”

Wirecard is continuing to investigate the matter and can’t rule out potential effects on the financial accounts of previous years, it said in Monday’s statement.