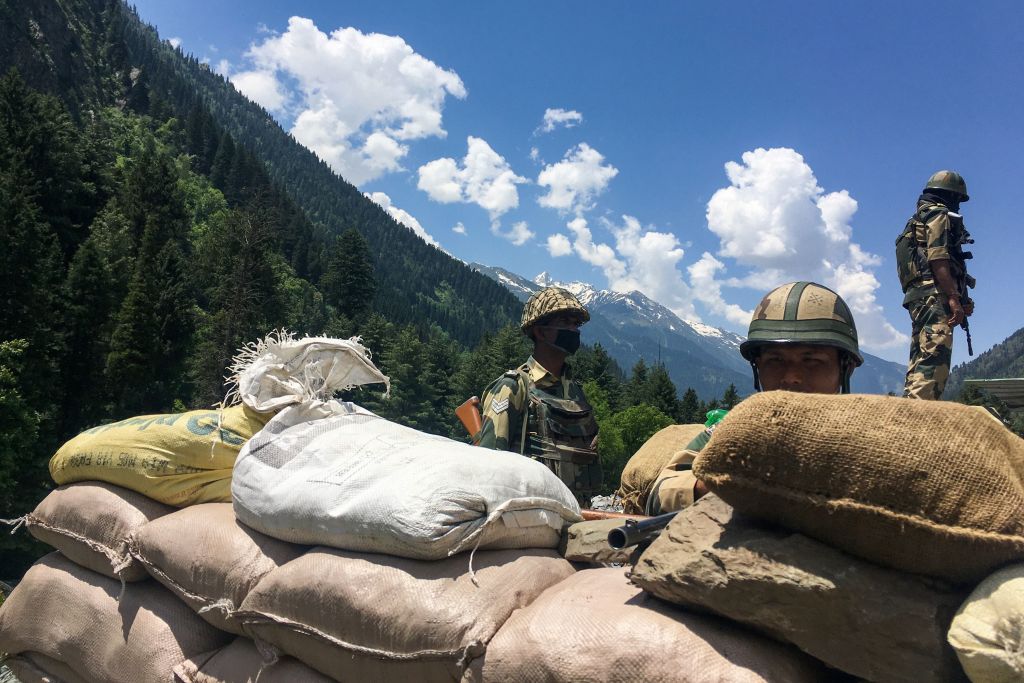 Indian Border Security Force (BSF) soldiers guard a highway leading towards Leh, bordering China, in Gagangir on June 17, 2020. - The long-running border dispute between Asian nuclear powers India and China turned deadly for the first time in nearly half a century after at least 20 Indian soldiers were killed in a "violent face-off", the army said on June 16. (Photo by Tauseef MUSTAFA / AFP) (Photo by TAUSEEF MUSTAFA/AFP via Getty Images)
TAUSEEF MUSTAFA—AFP/Getty Images

In near sub-zero temperatures in the thin air of 15,000 feet, Chinese and Indian soldiers attacked each other with stones, iron rods and bamboo poles wrapped in barbed wire laced with nails. It is not clear what started the clashes, but by the time they were finished 20 Indian soldiers were dead, along with an unknown number of Chinese casualties.

The violence broke out Monday afternoon and went on until midnight on the Tibetan plateau along the freezing Galwan river, Indian officials said, asking not to be identified citing rules on speaking to the media. It’s the first time in 45 years that a military skirmish along the contested Himalayan border had turned deadly, and it signaled a sharp deterioration in ties between the two regional giants.

In talks between senior military personnel to defuse a border standoff that’s been brewing for over a month, the two sides had agreed to create a buffer zone between the armies, Indian officials with knowledge of the matter said. Troops were to withdraw by a kilometer each to create an area that would separate the forces and ensure peace. Indian troops came under attack after they objected to Chinese troops’ construction of a fresh post in the buffer zone, the officials said.Play Video

The Indian Army spokesman was not immediately available for a comment, while Zhang Shuili, a military spokesperson in China’s western battle zone command, said in a statement late Tuesday there were casualties on both sides, without elaborating.

The uptick in tensions comes amid a rising din of nationalism stoked by both governments as the two powers jostle for regional influence. A further escalation could cast a shadow over a tripartite meeting planned with Russia this month.

It’s not in either country’s interests to be locked into a bloody border conflict, said Anit Mukherjee, assistant professor in the South Asia program at the S. Rajaratnam School of International Studies in Singapore.

“This standoff — with a loss of lives — is a very serious development,” Mukherjee said. “In the days ahead, as the funerals of the fallen play out in public, it will lead to an emotional call for some sort of a response.”

India stocks swung between gains and losses as investors weighed the consequences of a border conflict with China’s military while coronavirus infections continue to rise as the South Asian nation reopens. The S&P BSE Sensex index was little changed at 33,578.22 as of 10 a.m. in Mumbai.

In Washington, a senior administration official said on Tuesday the U.S. was monitoring the conflict and pointed out that President Donald Trump and Prime Minister Narendra Modi of India had discussed the border issue in a call early this month.

At a regular press briefing in Beijing Tuesday, China’s foreign ministry spokesman Zhao Lijian warned India against making any unilateral movement that could complicate the situation. A statement released by India said military leaders at the border were trying to negotiate a solution.

In a statement late Tuesday evening, India tried to defuse the situation and said it remained committed to peace on the border with China. The clash followed an attempt by the Chinese to alter the status quo in violation of de-escalation terms agreed to in recent talks, it added.

The escalation risks upending a scheduled meeting between Indian and Chinese foreign ministers at the Russia-India-China summit on June 22 and may set back diplomatic progress made during two informal summits between President Xi Jinping and Modi, the most recent taking place last October in India.

It comes as India’s longstanding differences with neighbor Pakistan continue to simmer and its relations with traditional ally Nepal significantly deteriorate, while Bangladesh is still smarting from New Delhi’s decision to adopt a religion-based citizenship law. Beijing is also under pressure as governments from the U.S. to Europe, Japan and Australia move to cut a dependence on China exposed by the pandemic, and it’s facing an international push to investigate the coronavirus, first identified in Wuhan.

Modi’s leadership will be tested as he manages the twin crises of a surging coronavirus epidemic and an economy that’s set for its first annual contraction in more than four decades this year.

India and China — which together account for a population in excess of 2.7 billion, or one third of the world’s people — are no strangers to animosity, and fought a war in 1962 over their 3,488 kilometer (2,167 mile) unmarked boundary. But that was supposed to be behind them as economic and commercial realities took precedence.

The challenge now is to de-escalate what is “arguably the most serious India-China border spat in years,” said Michael Kugelman, deputy director and senior associate for South Asia at the Washington-based Wilson Center. “Contrary to what Delhi has suggested, this won’t be an easy ladder to climb down.”

While tensions are expected to eventually ease, they come at an especially tricky time for Modi, Kugelman said. “For an Indian government forced to confront its more powerful rival even while fighting a deadly pandemic and accompanying economic crisis, this is not what it wants to say the least.”