With coronavirus in retreat, Amsterdam locals believe they can now reclaim a city center lost to overtourism 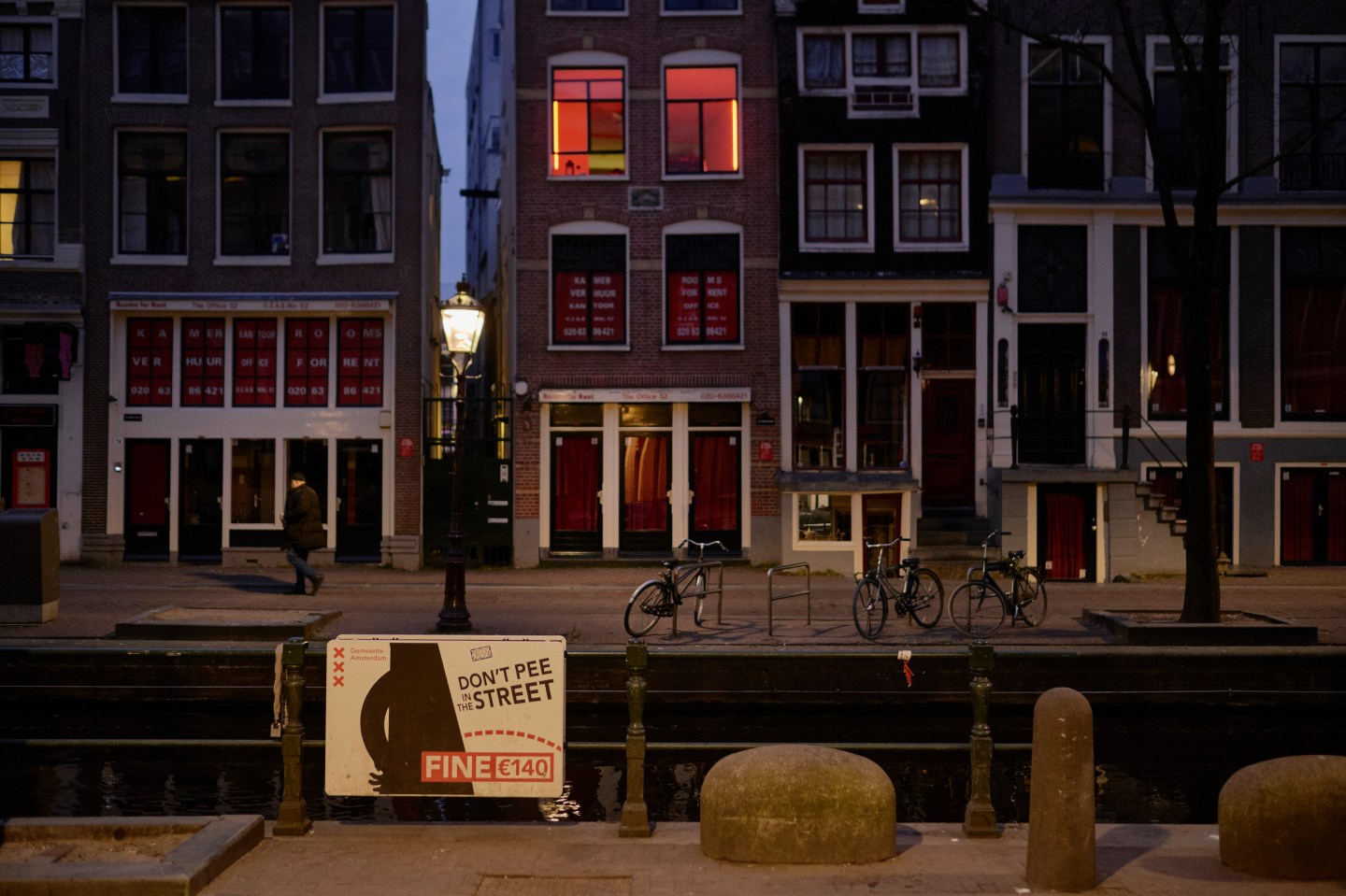 As the coronavirus pandemic raged in March and April, the 500-year-old Amsterdam city-center became a ghost town: The scantily clad sex workers in brothel windows in small alleys like Stoofsteeg in the red-light district were gone, as were the hordes of tourists who come there to gawk at them; Coffee shops on historic plazas like Rembrandtplein and Leidseplein didn’t get the visitors who descend upon the city by the thousands for the cannabis they sell.

By driving away the more than 1 million tourists the city gets on average each month — surpassing its population — the virus lifted the veil on something that had been in plain sight for years: local Amsterdammers have lost the city’s historic center.

Now, a fight is on to reclaim it.

“It painfully showed how few people actually live in the center and how little it has to offer locals,” said Mascha ten Bruggencate, who chairs the council of Amsterdam’s central district. “We need to change that.”

Cities and countries across the world are studying what they need to do differently in the post-Covid19 era. For Amsterdam, whose 19 million annual tourists bring in more than 6 billion euros ($6.8 billion) in revenue, that will mean striking a better balance between visitors and locals in its city center.

Amsterdam Mayor Femke Halsema laid out a plan at the end of May to do just that. Among measures she listed in a letter to the local council include buying property and limiting permits to ensure that the old city is not just dotted with shops selling souvenirs, cannabis and Nutella-lathered waffles but has companies where residents can work, houses where they can live and grocery stores and outlets that cater to them.

It won’t be the first time such efforts have been made. But the virus crisis underlined “the urgency to think about the city center of the future,” Halsema said in the letter, noting just how over-reliant on tourists it has become, and the need to diversify.

A triumph for the city came at the end of April, when Adyen NV, one of the country’s most successful fintech firms, said it will rent a 17,000 square-meter office in the heart of the city. The company, which processes payments for the likes of Uber Technologies Inc., Ebay Inc. and Booking.com Ltd., said it was drawn by the neighborhood’s retail activity.

Adyen’s young employees “like to work in a city that is vibrant, so they can, for example, visit a book store during their break or grab a drink together on a nearby terrace after a hard day of work,” said Chief Financial Officer Ingo Uytdehaage.

The local government has been actively trying to attract firms there, said Angelique Schouten, an executive at Ohpen, another fintech company that moved a few doors down eight years ago.

“There has been an exodus of companies here in the last 15 years,” she said. “With the arrival of Adyen, the balance is back on our street.”

What to do about the brothels

A key piece of the government’s plan to reconfigure Amsterdam is to get brothels to move out of the old city and curb coffee shops that serve tourists. That won’t be easy.

The liberal approach to sex, drugs and parties, not to mention old Amsterdam’s quaint cobbled streets, canals and narrow colorful town houses, make the city a popular tourist destination. But over the years, like in Venice and Barcelona, floods of visitors have overwhelmed local lives — from puking stoners to prostitute stalkers.

Things got so bad, some residents pasted photos of themselves in their windows with a sign that said, “I Live Here.”

“The street cleaning car has to pass by multiple times a day here to clean away the mess,” says Paul, a 52-year-old, who has been living in one of the many alleys in the red-light district for 16 years. A self-employed consultant who didn’t want to give his last name, Paul says he’s sick of the ever-increasing numbers of tourists who urinate or vomit by his doorway. He wants the local government to close window prostitution and coffee shops, and bring back local retailers.

“They have to give back this area to citizens, because if they don’t do it now, it will never happen,” he said.

That may be easier said than done. Local authorities have discussed and implemented multiple ideas over the years, like restrictions on tourist rentals and a ban on stores that cater to them. The council has even tried to buy out brothel owners to get them to move out.

“The tipping point was around 2014,” said Geerte Udo, CEO of amsterdam&partners, the city’s branding agency. “Everybody started to realize that more is not always better. Serving the tourist economy had become the sole purpose of the most crowded locations.”

Brothels that thrive on tourists are not keen to leave. Prostitutes who work in the 330 window brothels in the red-light district consider the area, full of cameras, as a safe place, and see tourists as their biggest income stream.

The pandemic has hit the sex business hard. Many sex workers have gone back home to eastern Europe or work illegally. And although brothels are set to reopen in September, they expect to generate only 30% of normal revenue as tourists mostly stay away.

“Things are not going well with us,” said Masten Stavast, the head of Agapi, a company that rents 31 window brothels to prostitutes.

While the financial pain of window brothel rental companies might have provided the city an opportunity to buy them out, local government coffers are themselves depleted. Also, that may not be a winning strategy. An effort over a decade ago to buy out more than 100 window brothels backfired as the value of the property tumbled with no high-end businesses wanting to move in.

“Let’s face it; prostitutes need tourists, and the tourists want to see Amsterdam, and what else is Amsterdam other than old Amsterdam?” Stavast said.

Cannabis-selling coffee shop owners are similarly wary of efforts to curb sales to tourists. Paul Wilhelm, the co-owner of two coffee shops, one of which is among Amsterdam’s oldest, says it would be terrible for business.

With foreign tourists gone, his shops — one of which was the location for a scene shot in 2004 with Brad Pitt and Matt Damon for the movie “Ocean’s Twelve” — have lost 50% of their revenue. Many coffee shops will fold because they couldn’t muster any local sales, he said.

He warns that the authorities may go too far to limit coffee shops — which may go underground and be criminalized.

“A tourist might be initially attracted by the coffee shops, but these people also book a hotel, visit a restaurant and will go on a round-trip boat ride in the canals,” he said. “They spend money. Economic times are going to be very tough in the years ahead, we also need jobs. You can’t have the idyll of a small village and be an economic metropolis at the same time.”

For some, tourism is not the problem. What the city needs is rigorous enforcement to keep the rowdy elements in check, says 81-year-old pensioner Jan Dorreboom, who has lived in the red-light district for 45 years.

“Joints and window prostitution are a part of Amsterdam; just live with it,” he said.

“My dream is that the city center will continue to be a vibrant place, but one where visitors are visitors, and not the main event,” she said. “It should be a place where locals live, work and do their thing.”