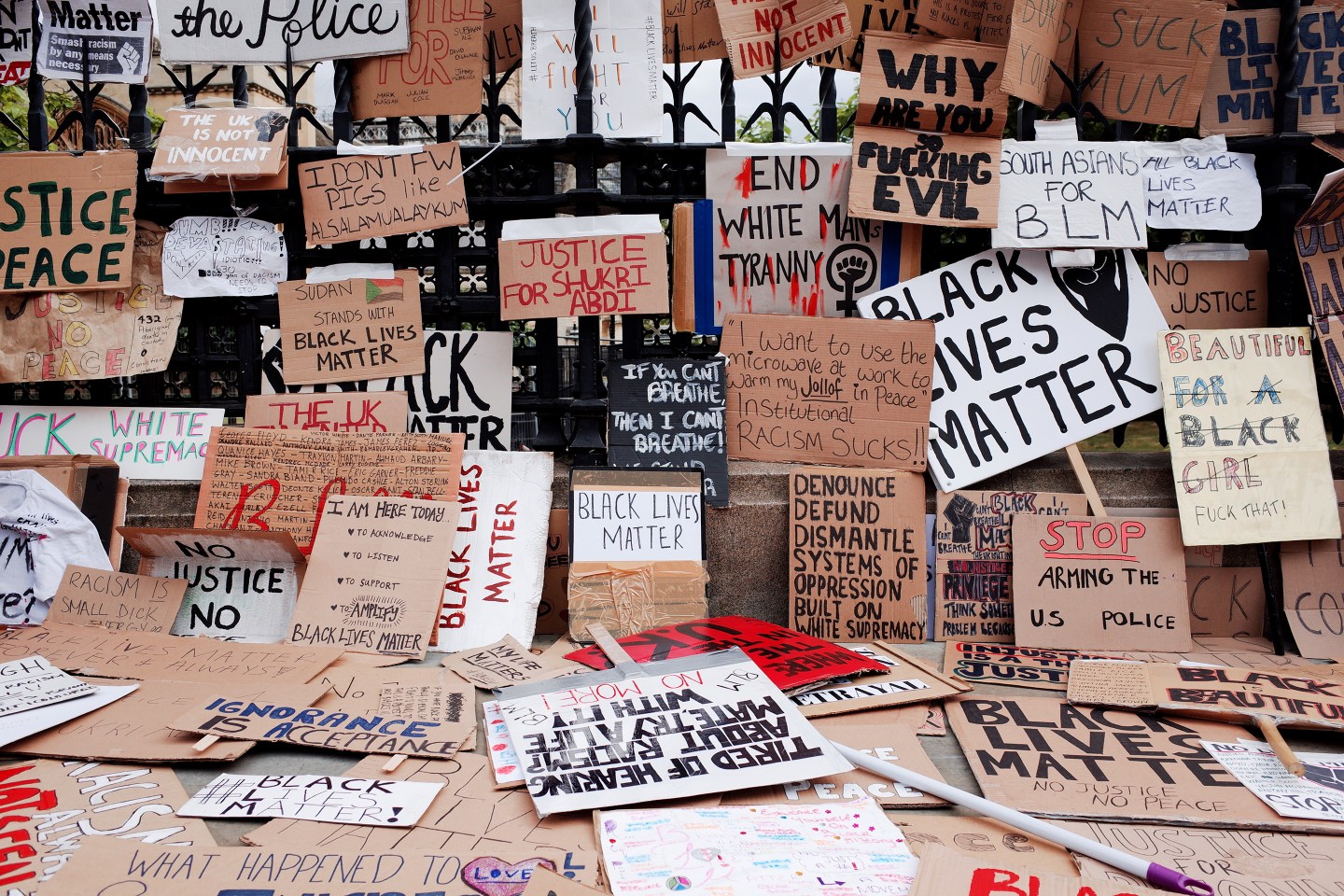 Placards stand fixed to the railings of the Parliamentary Estate at Parliament Square as Black Lives Matter activists, gathered for the second consecutive day of mass protest against racism, demonstrate on Whitehall in London, England, on June 7, 2020. Today marked the fourth massive Black Lives Matter protest in London in eight days, amid a global wave of anti-racism demonstrations sparked by the killing in police custody of a black man, George Floyd, in the US city of Minneapolis on May 25. (Photo by David Cliff/NurPhoto via Getty Images)
David Cliff—NurPhoto/Getty Images

From Budapest to Birmingham, England, tens of thousands of Europeans took to the streets this past weekend in solidarity with Americans, calling for racial justice and an end to the abuse of power by police forces in the wake of the killing of George Floyd two weeks ago. They did so despite, in places, stormy weather—and in defiance, nearly everywhere, of strict social-distancing rules.

In Paris, Copenhagen, Barcelona, and Lausanne, Switzerland, demonstrators packed narrow city streets, major public squares, and iconic parks to raise their voices against racial violence and police brutality. In cities such as London and Naples, Italy, the protesters assembled outside the U.S. embassy or consulate buildings to chant George Floyd’s name and demand justice. They carried signs, in English and in the local language, denouncing racism and showing their support for the Black Lives Matter movement.

Under sunny skies in Rome, a young crowd filled Piazza del Popolo, reminding others that racism is not an American problem, but a global scourge. In Brussels, protesters also used the occasion to call attention to local cases, such as that of Moïse “Lamine” Bangoura, who died in police custody in 2018.

The May 25 killing of George Floyd is forcing many in Europe to confront the continent’s troubled past with race relations. In Belgium, a former colonial power, a petition is circulating, calling on the country to take down all statues of former King Leopold II. Leopold, who ruled from 1865 to 1909, is blamed for the genocide that killed millions in the former Belgian Congo colony in the late 19th and early 20th centuries. In the English city of Bristol, antiracism protesters toppled the statue of former slave trader Edward Colston and threw the bronze likeness into the River Avon.

A popular joke on Twitter reads, “Protesters say statue tripped, and fell into the water.” But by Monday, it had become clear the statue incident wasn’t being treated as a joke. Police said they had opened up an investigation into the incident. Meanwhile, members of the U.K. government, including Prime Minister Boris Johnson, called it an act of “thuggery.” Home Secretary Priti Patel tweeted, “justice will follow.”

There’s no sign the global demonstrations will go quiet anytime soon. Perth, in Western Australia, is among the cities planning further street protests this weekend.

Scroll below to explore the global protests through photographs.

In Edinburgh, protesters stand with a banner outside Holyrood Palace after a demonstration on June 7.
Andy Buchanan—AFP/Getty Images.

The Black Lives Matter demonstration in Copenhagen on June 7 began in front of the U.S. embassy and moved on to Denmark’s parliamentary building, Christiansborg Palace.
Nikolai Linares—Ritzau Scanpix/AFP/Getty Images)

Protesters at an antiracism demonstration in Brussels on June 7.
Kenzo Tribouillard—AFP/Getty Images
The family of Moïse “Lamine” Bangoura, who was killed by police in Belgium in 2018, protest in front of the Brussels Palace of Justice on June 7.
Didier Lebrun—Photonews/Getty Images

More than 1,000 people gathered at a Black Lives Matter demonstration in front of the U.S. embassy in Budapest on June 7.
Attila Volgyi—Xinhua/Getty Images

A demonstration against racism, xenophobia, and fascism, in Praça da Liberdade at the center of Porto, on June 6.
Rita France—NurPhoto/Getty Images