How Greece can reopen without ruining its coronavirus containment success 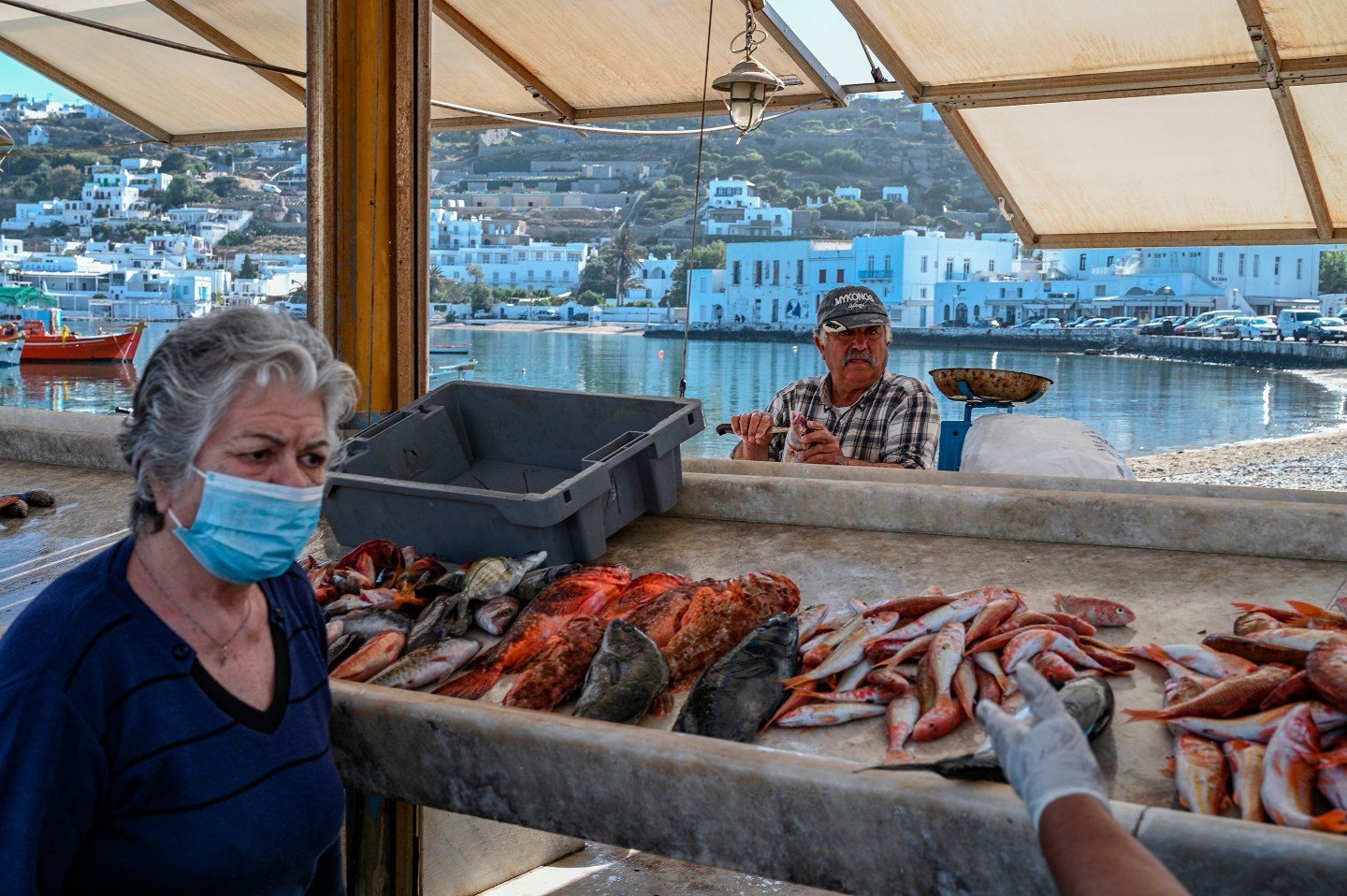 An elderly woman wearing a protective facemask buys fresh fish at a fisherman stand in the old port of the Greek Cycladic island of Mykonos, on May 13, 2020. - In Mykonos, at the start of the tourist season, the image is striking: the posh island traditionally crowded with wealthy foreigners has turned into a ghost island, offering visitors deserted alleys, boarded up shops, restaurants and abandoned hotels. (Photo by ARIS MESSINIS / AFP) (Photo by ARIS MESSINIS/AFP via Getty Images)
Aris Messinis—AFP via Getty Images

In early February, if someone predicted that Greece’s response to the coronavirus pandemic would be stronger than that of Germany, France, the U.K., and Italy, they might have been accused of spending too much time with Dionysus, the Greek god of wine. Low expectations seem justified given Greece’s failures during the last decade’s financial crisis.

Prime Minister Kyriakos Mitsotakis faced labors that would have scared Hercules. A decade of austerity decimated Greece’s public health system. Greece has the second-highest population of people over 65 in the EU after Italy. About a third of all Greeks live in or near Athens, which is densely urban, famously social, and highly reliant on public transport. Greeks also have a track record of poor governance, public disobedience, and populist protests.

And yet, Mitsotakis—a former banker and management consultant, with degrees from Harvard and Stanford—led a very different response.

First, the government acted swiftly. Seeing transmissions elsewhere, Greece took restrictive measures early on—two weeks before its first death. The U.K. announced its full lockdown a day after Greece did, but at that point the Western European nation had 11 times as many confirmed cases and 24 times as many deaths.

The fast response was also well executed. Public health officials communicated directly with the public through daily televised briefings. Surprisingly, the vast majority of Greeks complied with public health orders. The government nearly doubled ICU capacity and recruited over 3,500 medical professionals. It coordinated action with philanthropies—such as the Stavros Niarchos Foundation and the Onassis Foundation—and corporate partners to ensure donations were spent effectively and efficiently. It worked with local 3D-printing vendors to produce health care equipment. Mitsotakis even took on the powerful Greek Orthodox Church, banning in-person Easter services in spite of protests from church leaders.

This was a dramatic turn. Greek political leaders across the spectrum had created an art form out of publicly blaming experts for difficult policy measures—from Brussels bureaucrats to local finance and tax officials. In stark contrast, Mitsotakis elevated experts.

Greece was also lucky. The country is smaller, more centrally managed, and less globally connected than its bigger European siblings. At the same time, it had to manage a complicated geography, a history of public noncompliance with laws and regulations such as tax collection, and an ongoing refugee crisis.

Overall, Greece demonstrated consistency in focus and resolve; that same strategy should guide its reopening efforts.

On May 4, Mitsotakis announced his reopening plans. The first phase includes reopening some businesses, schools, public beaches, and religious places under strict hygiene rules. The use of masks has become obligatory in public transportation and all services that require physical contact. Remote working and learning is highly encouraged.

The overall recovery looks less like flicking an on-off switch than gradually pushing up a dimmer. Moving too quickly could not only pose health risks, but also undermine Greece’s new sense of achievement.

Tourism is key—Greece’s one bright spot during the financial crisis. In 2019, it welcomed 34 million visitors (three times the country’s population), who directly contributed 18 billion euros in revenue (around 10% of GDP) and supported 850,000 jobs (about 22% of employment). But Greece’s overdependence on tourism could become its Achilles’ heel. Even in the best-case scenario, Greece’s tourism minister expects a 50% reduction this year.

The government announced last week it will start welcoming tourists on June 15, initially opening to countries that have had relative success in containing the virus. But tourists will only travel to Greece if they feel it’s safe. Safety must include social distancing, effective and immediate treatment of those who become sick, and contact tracing.

Vacationers will need to curtail the flamboyant social mixing that has made Greece an increasingly popular destination, particularly for younger visitors. Normally bustling streets, ports, and island towns will need to mitigate crowd sizes. Compulsory masks would inspire confidence with visitors and protect local workers.

When people are diagnosed with the coronavirus, the response must be fast. Remote locations need to have clear plans for how to treat patients with varying degrees of illness. These should include on-call doctors for all hotels, telemedicine, and access to structures designed to exclusively treat COVID-19 cases.

Greece may want to experiment with electronic bracelets and cell phone–tracing applications. Such initiatives may be expensive and complicated, but they are achievable if established early on at points of entry.

Greece has a golden opportunity to reimagine travel and set global standards for the coronavirus recovery. After showing the world how to successfully lock down, Greece can do the same with showing us how to reopen.

William J. Antholis is director and CEO of the University of Virginia’s Miller Center. He is also a nonresident fellow in the Governance Studies Program at the Brookings Institution.

Filippos Letsas is senior research assistant in the Foreign Policy Program at the Brookings Institution.