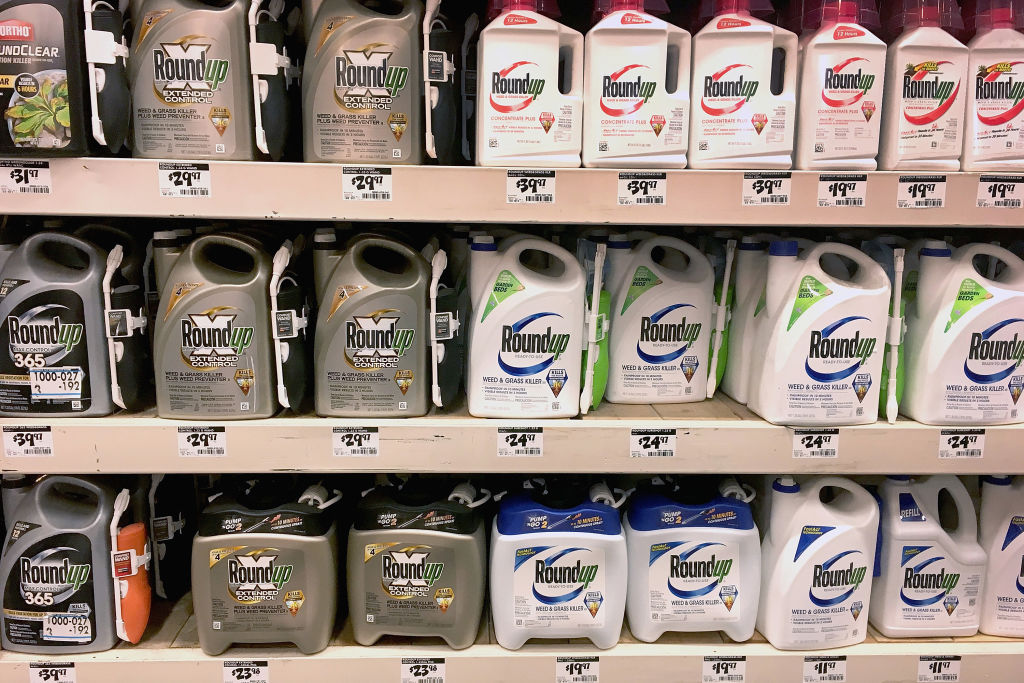 CHICAGO, ILLINOIS - MAY 14: Roundup weed killing products are offered for sale at a home improvement store on May 14, 2019 in Chicago, Illinois. A jury yesterday ordered Monsanto, the maker of Roundup, to pay a California couple more than $2 billion in damages after finding that the weed killer had caused their cancer. This is the third jury to find Roundup had caused cancer since Bayer purchased Monsanto about a year ago. Bayer's stock price has fallen more than 40 percent since the takeover. (Photo by Scott Olson/Getty Images)
Scott Olson—Getty Images

Bayer AG has reached verbal agreements to resolve a substantial portion of an estimated 125,000 U.S. cancer lawsuits over use of its Roundup weedkiller, according to people familiar with the negotiations.

The deals, which have yet to be signed and cover an estimated 50,000 to 85,000 suits, are part of a $10 billion Bayer plan to end a costly legal battle the company inherited when it acquired Monsanto in 2018, the people said. While some lawyers are still holding out, payouts for settled cases will range from a few million dollars to a few thousand each, said the people, who asked not to be identified because they aren’t authorized to speak publicly.

A surge in Roundup claims, along with some big court losses, have weighed on Bayer since the Leverkusen, Germany-based company spent $63 billion to buy agricultural giant Monsanto — which developed the weedkiller. The shares have dropped about 40% since the deal closed two years ago, wiping out some $39 billion of Bayer’s market value.

The shares gained as much as 4.6% Monday, according to Tradegate.

Bayer is likely to announce the settlements, which need approval from the company’s supervisory board, in June, people familiar with the negotiations said. None of the deals are signed, though plaintiffs’ lawyers are expected to do so the day of the announcement, the people said.

Chris Loder, a U.S.-based spokesman for Bayer, declined to comment on specifics about the talks, but said Friday the company has made “progress in the mediations” that arose from lawsuits. “The company will not speculate about settlement outcomes or timing,” Loder said in an emailed statement. “As we have said previously, the company will consider a resolution if it is financially reasonable and provides a process to resolve potential future litigation.”

The exact number of settlements so far wasn’t immediately clear, but the estimate of at least 125,000 claims is more than twice the amount of Roundup litigation cases Bayer has disclosed so far.

Before now, a complete tally was hard to pin down. In regulatory filings, the company only acknowledged filed and served cases of about 52,500 as of April. Tens of thousands more are being held in abeyance by plaintiffs’ lawyers under agreements with Bayer, people familiar with the negotiations said. Ken Feinberg, the chief Roundup mediator, said in January the total was 85,000 and would likely increase.

Bayer has said it will earmark $8 billion to resolve all current cases, including those held in abeyance, according to some of the people familiar with the settlements. The deals so far involve many of the strongest claims against the company, the people said. It’s unclear how much would go to those who have now settled and what’s left for the holdouts.

Another $2 billion will be set aside to cover future suits linking the weedkiller to non-Hodgkin’s lymphoma, people familiar with the talks said.

Under terms of the deals, Roundup will continue to be sold in the U.S. for use in backyards and farms without any safety warning, and plaintiffs’ attorneys will agree to stop taking new cases or advertising for new clients, the people said.

Because some of the Roundup cases are consolidated before U.S. District Judge Vince Chhabria in San Francisco, he may need to approve the settlement of those before him, the people said.

To be sure, with tens of thousands of cases still unresolved, there’s no guarantee the company will remain within the $8 billion it has budgeted for filed and backlogged lawsuits. Bayer complicated matters last month by backing out of some deals and demanding lawyers take less because of losses tied to the Covid-19 pandemic. That could prompt more lawyers to take their cases out of the settlement, the people said.

Feinberg, the Washington-based lawyer tapped by Chhabria to oversee settlement negotiations, said last week he remains “cautiously optimistic a national settlement will be reached.” He acknowledged fallout from Covid-19 “has slowed momentum” on the talks.

The settlements are designed to resolve claims that Roundup, whose active ingredient is the chemical glyphosate, caused non-Hodgkin’s lymphoma in some users. The company denies that Roundup or glyphosate cause cancer, a position backed by the U.S. Environmental Protection Agency. Still, after Bayer’s court losses spurred a surge in new suits, investors such as Elliott Management Corp. urged the company to seek a comprehensive settlement.

Feinberg dispatched mediators to oversee meetings between Bayer lawyers and individual plaintiff attorneys, who negotiated solely on behalf of their clients. The company has worked out various payout schedules, though none will exceed three years, the people said.

At this point, only a handful of lawyers are holding out for larger payouts, the people said. James Onder, a St. Louis-based attorney handling more than 24,000 Roundup cases, said last week he’s rebuffed settlement offers that would leave his clients with as little as $5,000 each.

Bayer’s overtures “have been insulting,” Onder said in an interview. The company is attempting “to strong-arm the most vulnerable in our society into accepting minuscule settlements, hoping they will cower in fear to Monsanto’s repeated idle threats of bankruptcy.” Onder said he’s preparing for trials in St. Louis next year.

The people familiar with the talks have said Bayer lawyers used the threat of putting Monsanto into bankruptcy to get people to accept lower payments. Other companies — including Purdue Pharma LLP — filed for Chapter 11 protection from creditors to deal with a burgeoning wave a lawsuits over its OxyContin opioid painkiller.

In a surprising move, Bayer is also pressing ahead with appeals of early cases it lost in court, the people said. All together, juries from three trials ordered the company to pay a combined $2.4 billion in damages. Judges later slashed those awards to $191 million.

The first Roundup verdict came from a state court jury in California, which held Monsanto liable for a grounds keeper’s lymphoma in 2018 and awarded him $289 million in damages. A judge later cut that to $78.5 million. Oral arguments in the appeal are scheduled for June 2 in San Francisco.

Refusing to include past verdicts in the settlement may be designed to send a signal on future claims that Bayer won’t just roll over and pay, said Carl Tobias, a University of Richmond professor who specializes in mass-tort law.

“It says they’ll fight ‘em through the appeals, which can take years to resolve,” Tobias said. “In the meantime, people will be dying.”

The deals also limit eligibility for payments to non-Hodgkin’s Lymphoma cases and those where plaintiffs died of that specific cancer over the last decade, according to a Bayer term sheet reviewed in January by Bloomberg News. Roundup users that blame the product for causing their multiple-myeloma cancers get nothing under the settlement.