How a property developer is making money by taking housing vouchers 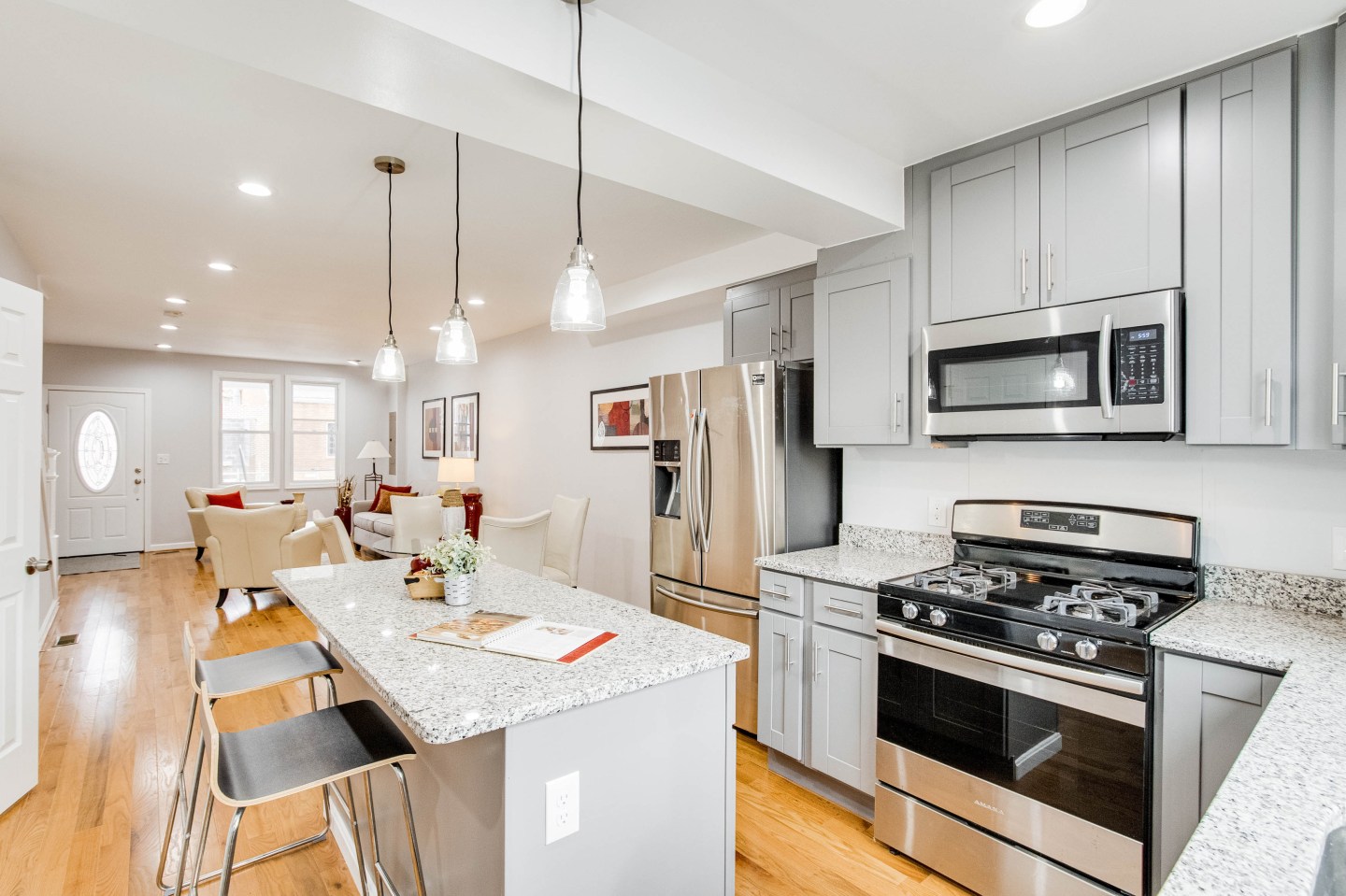 Joseph Asamoah was shocked when a potential renter with a Section 8 voucher came to look at his turn-of-the-century Washington, D.C., row house and snubbed him.

It was 1996; D.C. was in a recession. Crime, a drug epidemic, and dysfunctional government services sent thousands fleeing the District. After a neighbor was murdered on their doorstep, Asamoah and his wife joined the mass exodus and moved to the Maryland suburbs. Born in Ghana, Asamoah had moved to D.C. a decade prior from England, where he was raised. Believing the capital city would eventually “come back,” he listed the house for rent.

“She said, ‘Well, it doesn’t have a jacuzzi. It doesn’t have stainless steel appliances. Where are your hardwood floors?’” says Asamoah, recalling the conversation with the voucher holder at his row house in Columbia Heights, an enclave of D.C. where single-family homes are now selling in the millions. Asamoah purchased the house in 1989 for $47,000. “A voucher holder with a net worth of zero was telling me that where I lived was not worthy of her and her family.”

His rental property was competing with high-end renovations. These renovations were intended to be house flips, but no one was buying, so the properties were put on the rental market. Renters got used to bells and whistles.

The encounter led Asamoah to develop a real estate strategy that has inoculated the 59-year-old from economic shocks, like the current downturn caused by the pandemic. It’s earned him a nice portfolio—32 single-family homes in the Washington, D.C., area, one of the highest-priced housing markets in the U.S.

Asamoah rents to tenants with Section 8 vouchers, now called Housing Choice Vouchers. Depending on their income, they pay him from zero to $1,000 a month in rent. The Department of Housing and Urban Development (HUD) pays the balance. Despite the current unemployment numbers, reported at more than 33 million, Asamoah has experienced few issues collecting rent from his tenants. HUD pays him on time and in full; for those tenants who have been laid off because of the pandemic, HUD has adjusted down their portion of the rent.

Renting to those with Section 8 vouchers might just save his business. Most landlords don’t have the HUD safety net that Asamoah created as the cornerstone of his real estate strategy, and, with millions of Americans furloughed or laid off, many won’t be able to make their rent payments. Economist Jenny Schuetz, a housing expert at the Brookings Institution, says those landlords are playing a forbearance waiting game because it’s not clear if the CARES Act will save them. The act puts a temporary halt on required payments of federally backed mortgages. In a statement, the Mortgage Bankers Association expects “that the share of loans in forbearance will continue to grow, particularly as new mortgage payments come due in May.”

Asamoah has been through four market cycles, thriving with his niche strategy that melds vouchers holders with a business model commonly referred to as BRRRR—Buy, Renovate, Rent, Refinance, Repeat.

For more than 25 years, Asamoah has purchased distressed, single-family homes in emerging neighborhoods and transformed them into “HGTV grade” properties so he can rent them to voucher holders. From purchase to move-in, the cycle takes about eight months, including replacing short-term financing with permanent financing, visits to landlord-tenant court, and offsite visits to the homes of potential renters. He calls it “Big City BRRRRing.”

Economist Belinda Archibong calls it creating “geographies of opportunity.” An economics professor at Barnard College, Columbia University, Archibong says that in these transforming neighborhoods “poorer children can thrive. And it’s not just safety they are getting. It’s also access to better-funded schools and nicer grocery stores that offer healthier options. It is this larger cumulative impact—not just on their psychological health and their physical safety—but on their biological health and their ability to focus on school and attain more education.”

The front of one of Asamoah’s properties after renovation.
Courtesy of Joseph Asamoah

“What I find so interesting about what Asamoah is doing is [that] it’s not low-income families moving to rich, suburban neighborhoods,” says Richard Kahlenberg of The Century Foundation, a D.C.-based nonpartisan think tank.

Properties that accept vouchers are typically subpar housing in unsafe neighborhoods in the cities where tenants’ families have lived for generations or nicer properties in the suburbs where housing and opportunities are better, but where they also may feel out of place. Asamoah presents a third option.

“I think this is a very exciting example of what is possible if we allow low-income families the opportunity to be in strong neighborhoods that are different but not startlingly different,” Kahlenberg says. “They are familiar neighborhoods.”

Being able to choose to live in a neighborhood that feels familiar is a key ingredient to successful outcomes, says Kathryn Howell, a professor of urban and regional studies and planning at Virginia Commonwealth University. It’s not “always positive for children when they feel like they don’t fit in, out in the middle of nowhere. [They] may be one of the 10 black people in [their] school and disproportionately targeted by police; where transit can be challenging, and walkability is poor; where parents have left behind generations of family history and relatives who may be their only childcare options.”

Only 18 states have made “source-of-income discrimination” illegal, meaning in most of the U.S., landlords can refuse to rent to someone because his or her rent money comes from a voucher, not a paycheck.

“The tragedy is that the housing voucher program, which is meant to open up opportunity, has in most instances led low-income families to live in high-poverty neighborhoods where they get the least opportunity,” says Kahlenberg. “It remains culturally acceptable to discriminate against low-income people.”

In the Moving to Opportunity (MTO) Project, Harvard economist Raj Chetty determined that motivation plus environment is necessary for the children of an impoverished family to rise out of poverty—in other words, personal attitude is not enough.

Asamoah’s tenants have seen these economic theories play out. Lashan Smith has been renting from Asamoah since 2009. All six of her children graduated from high school, and her two youngest, 18-year-old twins, are college freshmen, at Smith College and Morgan State University.

“Having my children attend college is such a major accomplishment for me,” says Smith, who “barely finished high school” and never thought any of her children would go to college. “I have no doubt that being in a stable housing environment had a positive influence on my children. In addition to hard work and focus, it was clearly one of the main reasons that my twins were able to attend college.”

Before moving into one of Asamoah’s renovated rentals, Shawnita Resper says she lived in an apartment complex riddled with guns and violence. “The statistics aren’t great over there. Pregnancy and incarceration,” notes Resper, who has been renting from Asamoah since 1997. “Being around positive people with good work ethics left a lasting impact on my children.” Resper’s children are all college graduates.

When Fortune met with Asamoah, he was in the middle of fixing up a three-bedroom, one-bath 1910 row house on a quiet, treelined street in northeast D.C. Flanked by an elementary school at one end and a renovated recreation center on the other, the street bragged a few colorful, updated, single-family homes. He’d popped out the back of the house, which enabled him to increase the size of the master bedroom on the third floor and the kitchen on the main floor. He dug out the basement to add two bedrooms—the number of bedrooms increases the value of the voucher. In the end, his investment cost him $630,000; his rental income is more than $5,000 a month. His strategy requires that he’s “in it for the long game.”

So, not only is he quick to fix reported issues, each Mother’s Day Asamoah brings flowers, each Christmas he delivers presents, and, when report cards come around, children who earn A’s receive gifts. Plus, every year each family gets a weekend away at Asamoah’s Virginia time-share. Many of Asamoah’s tenants have been with him for more than a decade.

“You just have to be there in that room when you offer the house to a family,” says Asamoah. “You see the joy, the cries, the screams, the shouting. I mean these are life-changing opportunities. It’s a fork in the road.”

When he lists a newly renovated property on rental sites, Asamoah receives 15 to 20 applications, from both voucher holders and those without, which he says is far higher than what most rentals in the area get. Asamoah puts all of his potential tenants through the same screening, which includes an eight-page application and a 20-page rental agreement, as well as a home visit. “Most non-voucher-holders are not used to a screening process as intense as mine,” says Asamoah. And while he does have a few non-voucher tenants, most are deterred by a system they may feel is “intrusive” but, according to Asamoah, does not violate any housing statutes.

Keeyonna Musgrove recently beat the odds. Earlier this year, Asamoah accepted her application to move into his latest house flip in northeast D.C.; the ribbon cutting was in February. She had been living in a “neighborhood [that] was crime-ridden,” says the mother of six, whose children range in age from 1 to 18. “Broad daylight was as dangerous as nighttime…I just felt trapped.”

Musgrove’s experience, Asamoah says, is an example of how his strategy is also an antidote to the negative effects of gentrification. He points to the transformation that’s taken place in Columbia Heights, where he was snubbed back in the ’90s. The woman who has been renting from him there for more than two decades is the only African-American resident on the street. “When we lived there, it was 100% black,” says Asamoah. “If it weren’t for me, she wouldn’t be there. No way, zero chance.”

Since he can’t even meet the demand now, Asamoah worries what will happen when he stops his “Big City BRRRRing.” So he’s teaching his strategy to interested property managers; those in D.C. meet with him in person and follow him through his entire process (for now, that’s been moved to virtual meetings because of the pandemic). He’s also joined an online real estate platform, BiggerPockets, to teach his tactics to a national audience.

Asamoah’s tenant Lashan Smith hopes his students and other landlords will adopt Asamoah’s strategy. “Take note,” she says. “Look at what this person is doing. Look at how he interacts with people…He cares about the people that rent from him.”