Farmworkers deemed ‘essential’ but are left unprotected during coronavirus pandemic 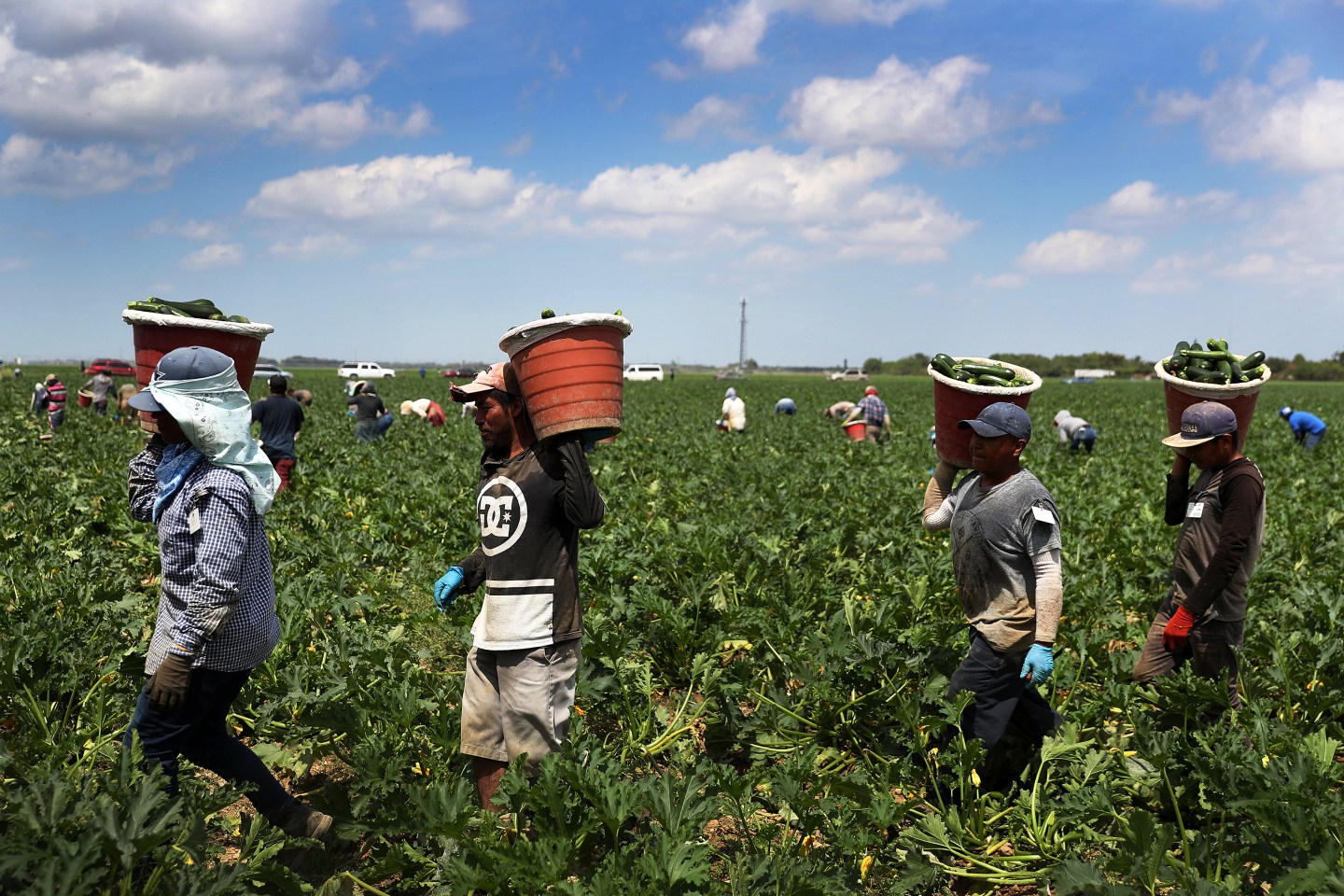 FLORIDA CITY, FLORIDA - APRIL 01: Farm workers harvest zucchini on the Sam Accursio & Son's Farm on April 01, 2020 in Florida City, Florida. Sergio Martinez, a harvest crew supervisor, said that the coronavirus pandemic has caused them "to have to throw crops away due to less demand for produce in stores and restaurants. The farm workers who are essential to providing food for homebound families are worried that if the restaurants stay closed and peoples changed grocery store habits continue they would be out of work with no work for the near future." (Photo by Joe Raedle/Getty Images)
Joe Raedle—Getty Images

Right now, farmworkers are still toiling from sunup to sundown to plant, pick, and pack the produce we eat. As the U.S. scrambles to flatten the COVID-19 curve, grocery store shelves have been emptied, and the Trump administration has declared food and agricultural workers as one of the “essential” groups of workers who are advised to continue working, as states across the country have announced shelter-in-place orders.

The federal government, prior to this recent advisory, hasn’t actually treated farmworkers like the essential workers they are—deserving of the same rights and protections as others. In fact, farmworkers were excluded from the Fair Labor Standards Act of 1938 and the National Labor Relations Act of 1935, labor laws that provide most other workers with protections (like the right to overtime or to unionize). While the Migrant and Seasonal Agricultural Worker Protection Act provided more protections for farmworkers by regulating housing standards, requiring paychecks, and establishing requirements for employer record-keeping, and while some states such as California have provided additional protections under state law like the right to overtime and the right to unionize, farmworkers are still not guaranteed those rights under federal law.

It took a global pandemic for the federal government to acknowledge that farmworkers are critical to the U.S. economy. And as Congress considers legislation to address this unprecedented crisis, farmworkers must not be left behind.

The threat posed by COVID-19 is exacerbated for farmworkers because they’re unable to take the basic steps necessary to protect themselves. As farmworkers continue to labor in fields all day long, many are shielded only by bandannas to protect their faces. And a 2010 study found that soap is often not available in hand-washing facilities in the fields.

Social distancing is also not a viable option for farmworkers. According to the 2018 National Agricultural Workers Survey (NAWS), which covers 2015 to 2016, 19% of U.S. farmworkers were migrants, meaning that they follow the crops from location to location for work. Nearly a quarter of those interviewed said they travel in large groups, in vans or buses, to get from job to job because they are dependent on contractors or crew leaders to transport them. The survey also found that 45% of migrant workers and 44% of undocumented workers lived in crowded housing.

Farmworkers are also among some of the most impoverished workers in the U.S., having earned an average of $10.60 an hour, according to the NAWS. Farmworkers are currently not eligible for paid sick leave or unemployment insurance in most states, which leaves most farmworkers without a financial safety net to support their families when they fall ill. While the Families First Coronavirus Response Act might grant the possibility of paid sick leave for some farmworkers, many would be excluded from that, particularly given that small employers (those who employ less than 50 people) may be exempted from these new provisions. And yet, farmworkers who are employed by larger farms with more than 500 workers would also be excluded from the paid-leave provisions—making this benefit accessible only to those who fall between the two brackets.

Meaningful measures to protect farmworkers must be taken now. At the very least, farmworkers need to be provided face masks and gloves as a precautionary measure. They also need soap and water in the fields, not to mention in their bathrooms and bathing facilities, to meet the hygiene recommendations outlined by the CDC to prevent the spread of COVID-19.

Given that most people around the country are currently not able to access tests, even if they exhibit mild to moderate symptoms, a farmworker could be symptomatic and require isolation in order to avoid getting other workers sick. This would require employers to provide separate housing for these workers so that they can be isolated from others. Those who have been exposed to ill workers should also receive housing where they can self-quarantine—and employers should guarantee that their job is not at risk owing to illness or self-quarantine.

Many provisions of the recent federal coronavirus relief bill do not extend to certain immigrants. Paying for a COVID-19 test could be cost prohibitive, especially for low-paid undocumented farmworkers who already face difficulties in accessing health care. Therefore, the federal government must also ensure that all workers, regardless of their immigration status, are afforded free testing to determine whether they have COVID-19, as well as the medical care that they need. After all, COVID-19 doesn’t discriminate based on immigration status.

Farmworkers are at the heart of the U.S. food chain. Political leaders and employers must take the appropriate measures to protect farmworkers. Because if farmworkers fall sick, what happens to our food supply in the process?

Mónica Ramírez is founder and president of Justice for Migrant Women.

Meena Harris is founder and CEO of the Phenomenal Woman Action Campaign.

They are cofounders of the Phenomenal Farmworkers Initiative, which was launched to drive donors to the Farmworkers’ Pandemic Relief Fund.

—Why we need a government supply-chain office now, more than ever
—Tax-exempt student loan assistance is now law. It’s time to make it permanent
—There will be another pandemic after the coronavirus. It’s time to start preparing
—Millions unemployed in the coronavirus pandemic could be retrained to fight it
—Listen to Leadership Next, a Fortune podcast examining the evolving role of CEOs
—WATCH: The CEO of Canada’s biggest bank on the keys to leading through the pandemic