Why microgrids are key to solving energy poverty worldwide 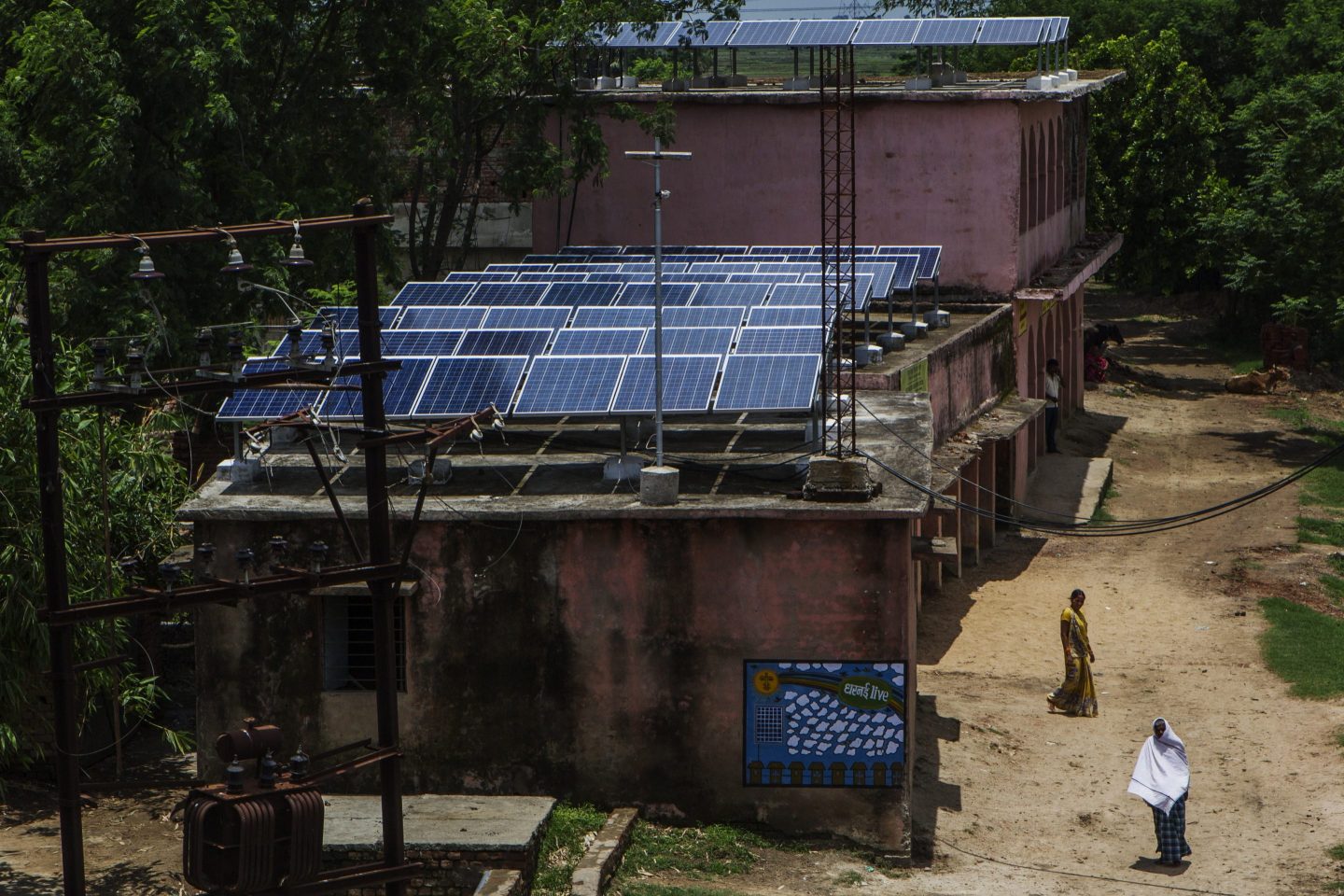 Villagers walk past solar panels mounted on the roof of a building, part of a solar power microgrid, in the village of Dharnai in Jehanabad, Bihar, India, on Thursday, July 9, 2015. While Prime Minister Narendra Modi's ambition has led billionaires such as Foxconn Technology Group's Terry Gou to pledge investment, the question remains whether the 750 million Indians living on less than $2 per day can afford or will embrace green energy. Photographer: Prashanth Vishwanathan—Bloomberg/Getty Images
Prashanth Vishwanathan—Bloomberg/Getty Images

Imagine you are one of the 840 million people around the world who live without access to electricity: Basic machinery is powered manually, you rush to finish work before sundown, there are limited means for reading or studying at night, and you are locked out of the modern information economy. Yet imagine that suddenly, your situation changes with the arrival of microgrids.

Renewable energy microgrids, also referred to as mini-grids, are decentralized electrification systems, comprising local generation (solar, biomass, micro-hydro), battery storage, a small control room, and local distribution lines. These grids offer not only the potential of electricity, but also the power of data and technology.

This reversal of fortune is now possible for hundreds of millions of people. In fact, it is one of the critical Sustainable Development Goals of the United Nations, SDG7: the global goal of ensuring basic energy access for 100% of the world’s population by 2030. Yet as we look ahead to this new decade, at the current rate of progress, 650 million people will still be left behind and locked out of the modern economy, according to the report tracking progress on SDG7. The business, social, and public sectors must come together to do more.

When electricity enters a community, everything changes. Families can light their homes, charge their cell phones, and power appliances that save hours of household chores each day. Communities enjoy modern health care services and education, and streetlights increase safety for women and girls.

Farmers increase their crop yields with irrigation, protect their crop value with cold storage, or increase their returns through postharvest processing. Small businesses can grow and hire new workers, connecting into increasingly integrated supply chains and markets at home and around the world. Indeed, electricity is the foundation on which modern businesses run and thrive.

We are now at a tipping point: Advances in science and technology have produced next generation, decentralized energy solutions transformational enough to quickly connect the unconnected and move people to a new level of economic potential. Today, advancements in energy management systems, smart meters, remote monitoring, and new energy storage technologies make microgrids the best possible solution to connect hundreds of millions of people more quickly and more sustainably. The World Bank recently released a flagship report assessing that over half of the world’s unelectrified population would be more cost effectively served via microgrids.

Extending the existing grid is of course another way to address energy poverty, although that expansion takes time and is often not cost effective, especially in rural areas where most of the world’s unelectrified population lives. A typical microgrid, on the other hand, can be up and running in as little as two months. It can power a small village or an entire town, and serve a wide range of customers, including households, businesses, and public institutions such as health care clinics and schools.

Today microgrids in rural areas across sub-Saharan Africa and Asia are using control and data management systems as sophisticated as what utilities use in major cities, according to a report by the Institute for Advanced Sustainability Studies. It is even possible to pair microgrids with traditional grid extension for faster, cheaper, and more impactful electrification.

This is why TP Renewable Microgrid Ltd., an initiative of Tata Power supported by the Rockefeller Foundation, has come up with a plan to provide clean, reliable, affordable power to 10,000 villages across India, directly impacting the lives of 25 million people over the next decade. (This projection is based on research conducted by the Rockefeller Foundation, Smart Power India, and the Institute for Transformative Technologies.) This partnership will unleash local economic opportunities, driving energy consumption and living standards in a manner that is consistent with our shared global climate goals.

There are other major players in this growing space. PowerGen, which one analyst calls the market leader in Africa, has rapidly scaled up from 60 microgrids at the end of 2018 to 193 sites currently. PowerCorner, the mini-grid arm of French multinational Engie, is operating nine microgrids with four more under construction, with the aim of continuing to expand in the coming years.

To end energy poverty on a global scale, the private and philanthropic sectors must work together to drive technology improvements so that systems get smarter, cheaper, and quicker to deploy. Philanthropy can reduce risk for businesses looking to scale up social impact through increased investment.

As we embark on a new decade, the need to end energy poverty—and the impact it will have—can’t be ignored. There is room for everyone to have a role—investors, technology companies, data scientists, and those in the energy industry.

Through collaboration and partnership across sectors, we can transform the lives of millions of people around the world. Providing reliable, renewable electricity to the communities that need it most is one of the best ways for us to end poverty, protect our planet, and unleash economic opportunity in our lifetimes.

Natarajan Chandrasekaran is chairman of the Tata Group.

Rajiv J. Shah is president of the Rockefeller Foundation.