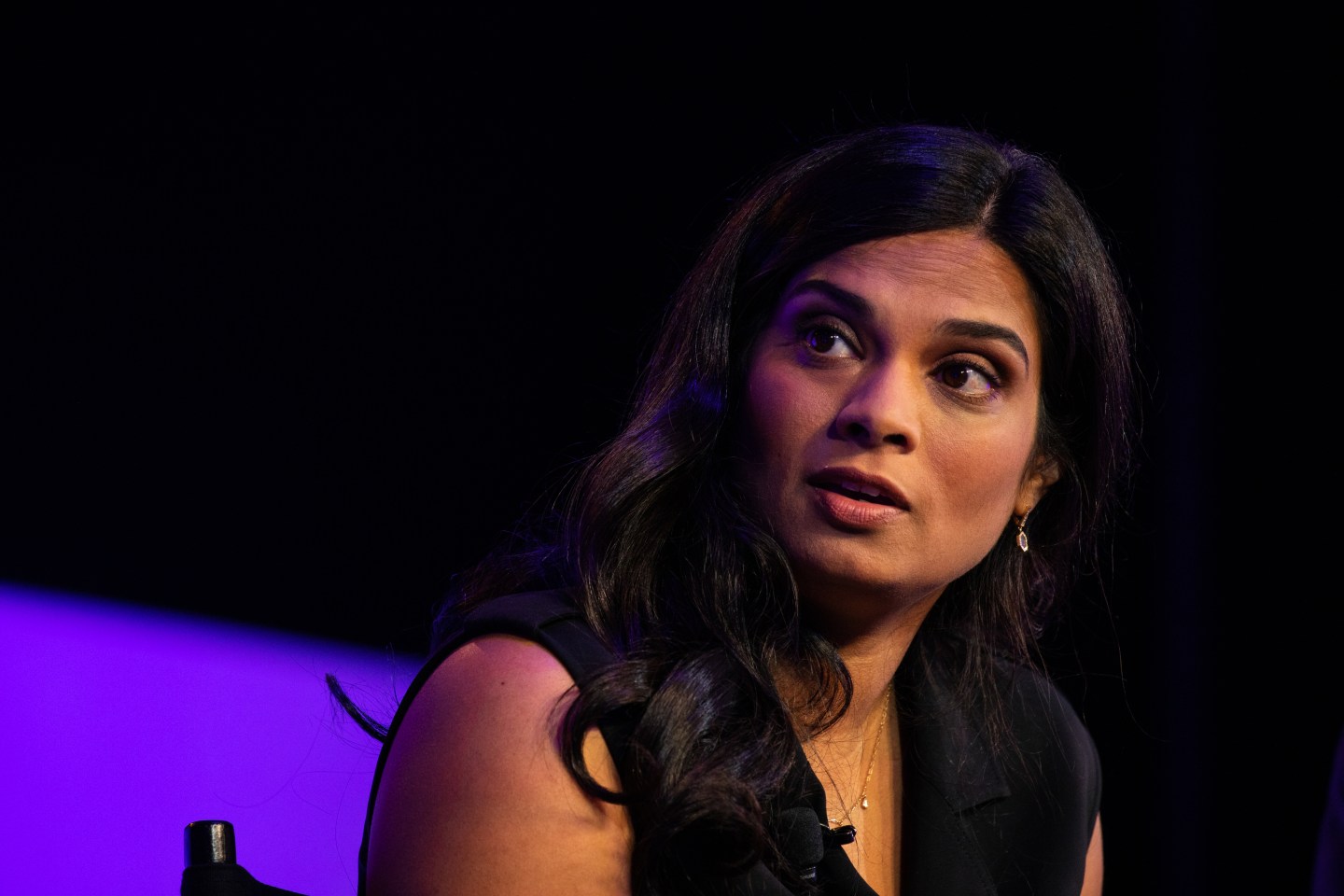 Whenever somebody on Twitter takes issue with the network’s rules or content policies, they almost always resort to the same strategy: They send a tweet to @jack.

A quick scan of Chief Executive Officer Jack Dorsey’s mentions show just how often he’s called upon to lay down the law for the service he helped create. But what users don’t know is that they’re imploring the wrong Twitter Inc. executive. While Dorsey is the company’s public face, and the final word on all things product and strategy, the taxing job of creating and enforcing Twitter’s rules don’t actually land on the CEO’s shoulders. Instead, that falls to Twitter’s top lawyer, Vijaya Gadde.

As Twitter’s head of legal and policy issues, Gadde has one of the most difficult jobs in technology: Her teams write and enforce the rules for hundreds of millions of internet users. If people break the rules, the offending tweets can be removed, users can be suspended, or in extreme cases booted off Twitter altogether. Dorsey may have to answer for Twitter’s decisions, but he’s taken a hands-off approach to creating and enforcing its content policies.

“He rarely weighs in on an individual enforcement decision,” Gadde said in a recent interview. “I can’t even think of a time. I usually go to him and say, ‘this is what’s going to happen.’”

That leaves Gadde, 45, as the end of the line when it comes to account enforcement — a delicate position in a world where Twitter’s rules are both an affront to free speech and an invitation to racists and bigots, depending on who’s tweeting at you. “No matter what we do we’ve been accused of bias,” Gadde said. “Leaving content up, taking content down — that’s become pretty much background noise.”

Like most corporate lawyers, Gadde generally operates in the background herself, though her influence has helped shape Twitter for most of the past decade. A graduate of Cornell University and New York University Law School, Gadde spent almost a decade at a Bay Area-based law firm working with tech startups before she joined the social-media company in 2011. Her eight-plus years at Twitter are about equal to the amount of time Dorsey has worked there over the years.

But as Twitter’s role in global politics has increased, so has Gadde’s visibility. She was in the Oval Office when Dorsey met with U.S. President Donald Trump last year, and joined the CEO when he met Indian Prime Minister Narendra Modi in November 2018. When Dorsey posted a photo with the Dalai Lama from that trip, Gadde stood between the two men, holding the Dalai Lama’s hand. InStyle just put her on “The Badass 50,” an annual list of women changing the world. “Vijaya defines the word,” tweeted Twitter Chief Marketing Officer Leslie Berland.

When Gadde first joined Twitter, the internet was a different place. At the time, a lot of politicians were just getting familiar with the platform. Trump primarily used his Twitter to share announcements about his TV appearances (though this would quickly change). The official presidential account, @POTUS, wouldn’t even come into existence until 2015, under then-President Barack Obama.

When Gadde took over as general counsel in 2013, the social-media service had an “everything goes” mentality. A year prior, one of Twitter’s product managers in the U.K. famously said that Twitter viewed itself as “the free speech wing of the free speech party,” a label later repeated by then-CEO Dick Costolo. The company simply “let the tweets flow,” said one former employee.

That freedom is part of what drew Gadde to Twitter in the first place. An immigrant from India, Gadde moved to the U.S. as a child and grew up in east Texas, where her dad worked as a chemical engineer on oil refineries in the Gulf of Mexico, before moving to New Jersey in middle school. “I was the only Indian child most of my education until I went to college,” she says now. “You feel voiceless. And I think that that’s kind of what drew me to Twitter — this platform that gives you a voice, and gives you a community and gives you power.”

Twitter’s commitment to giving everyone a voice, though, has also come with a general reluctance to take it away. Twitter’s decisions in recent years to ban certain users, including conspiracy theorist Alex Jones and far-right media troll Milo Yiannopoulos, were news in part because Twitter’s decisions to act were so uncharacteristic. Gadde acknowledges the change, saying that the company has come to realize in recent years the responsibility it has to protect the safety of its users, including when they’re not using the product. “I would say that the company has shifted its approach dramatically [since I started],” she said.

Perhaps no user presents a bigger quagmire for Gadde and her team than Trump, the platform’s most famous user, whose tweets often push the boundaries of Twitter’s rules. The president’s habit of blasting messages to his 70.9 million followers has taken on a new vigor thanks to a looming impeachment trial and re-election bid. Following the U.S. drone strike in early January that killed a top Iranian general, Trump threatened Iran with military force in a number of tweets, including the targeting of cultural sites. That prompted many observers, including some former Twitter employees, to ask why he hadn’t been suspended — a cycle that has played out several times following other Trump tirades.

Last month, Trump attacked his Democratic rivals, blasted Congress over impeachment proceedings, and even mocked teenage climate activist Greta Thunberg from his @realDonaldTrump Twitter account. According to a USA Today analysis, his tweets contain more negative language than ever. The study looked at whether Trump tweeted words with positive or negative connotations, and found he “is posting fewer tweets with words that convey joy, anticipation and trust, and more that convey anger.” Trump sent or retweeted more than 1,050 messages in December, according to Hootsuite — more than any other month since taking office.

“The way he uses social media is a reflection of just how unusual a candidate, and now a president, Trump is. A big part of that is that he breaks all the rules,” said Patrick Egan, a professor of politics and public policy at New York University. “Something that a lot of people really like about him is that he says the kind of things he’s not supposed to say, and of course that’s exactly the kind of thing that can get you into trouble on social media.”

Inside Twitter, Trump’s tweets are a frequent topic of conversation among employees, and Gadde’s authority also means that she has the unique job of punishing the world’s most famous tweeter — should it ever come to that. “My team has the responsibility to do that with every single individual who uses Twitter, whether it’s the president of a country or it’s an activist or it’s somebody we don’t know,” she said. “I honestly do my best to treat everyone with that same degree of respect.”

Twitter has so far decided that Trump hasn’t crossed any lines, but the company is prepared for such a scenario. While it’s unlikely that Twitter would ever suspend a well-known politician – the company also has a newsworthiness policy, which means it’s less likely to take action on tweets from elected officials — it’s devised another penalty for world leaders: A warning screen unveiled last summer that hides a tweet from public view and limits its distribution, but still allows people to view the tweet with the click of a button. It’s a way to publicly acknowledge that a politician has violated Twitter’s rules while admitting what they said is too newsworthy to be taken down. “It’s preserving a record of what is said in the public interest,” Gadde explained.

The process is designed like this: A content moderator, who may be a third-party contractor, reviews a tweet that has been flagged and determines whether it violates Twitter’s rules. If they decide that it does, moderators can usually enforce punishment at this stage, but Twitter requires a second layer of review for offenders who are considered public figures — in this case, a verified politician with more than 100,000 followers, Gadde said.

The tweet is then sent to Twitter’s trust and safety team, and if they also agree that the post violates the rules, Twitter convenes a special group of employees from across the company to review it. This group, about a half-dozen people from various teams, is meant to bring in a diverse set of perspectives, Gadde explained. That panel then makes a recommendation to Del Harvey, Twitter’s head of trust and safety, and her boss, Gadde, for a final decision.

Barring some kind of emergency, using the label will ultimately be Gadde’s call. “Vijaya has a young kid still, so she’s very used to being woken up any hour, which is helpful,” Harvey joked to a group of reporters last summer.

Gadde won’t go so far as to say the new warning label was created with Trump in mind — “We try to think of these things globally and not just about the United States,” she said — but added that even though the screen, referred to internally as the Public Interest Interstitial, hasn’t been used since its debut last June, it will eventually make an appearance. Gadde said Twitter has used the newsworthiness policy a “handful” of times in the past as justification for leaving offending tweets up. But the company didn’t have the warning label back then, so the general public didn’t know anything had even been discussed behind the scenes, she said. “We know it happens, and that it will happen.”

Twitter actually pointed to this policy in September 2017 when answering questions about the decision to leave up a tweet from Trump that appeared to threaten North Korea with nuclear war. Twitter also has a policy against threats of violence. A White House spokesman, Steven Groves, declined to answer questions about Trump’s use of Twitter.

Historically, Twitter’s rules around free speech have been so lax that a number of celebrities and journalists, including singer Lizzo, actress Millie Bobby Brown and New York Times writer Maggie Haberman, have stepped away from the service — at least temporarily — with many citing bullying and harassment. U.S. Senator Kamala Harris, a former Democratic candidate for president, thought Twitter’s enforcement weak enough that she implored the company to suspend Trump in a letter in October, saying he uses his account to obstruct justice and intimidate people, including the whistle-blower whose report ultimately led to his impeachment. Twitter responded that Trump’s tweets didn’t break the rules.

The newsworthiness exemption gives Twitter a lot of wiggle room when it comes to removing high-profile tweets, but Gadde said the point of the warning label, and the company’s attempt to explain it, are part of a broader effort to be more transparent about how and why the company makes decisions — something she admits hasn’t always been clear. As Twitter has grown, so has the company’s understanding that it can’t simply sit by and let people tweet whatever they want, Gadde said. It’s one of the many ways her job has evolved over the years.

“We’re trying to do so much more of our work in public,” she said. “I want people to trust this platform.”

—Greenpeace ranks China’s tech giants on renewable energy
—Sex tech steals the spotlight at CES
—Why there are so many scooters in Los Angeles
—What a $1,000 investment in 10 top stocks a decade ago would be worth today
—Best of CES 2020? Tech sites’ opinions differ wildly
Catch up with Data Sheet, Fortune’s daily digest on the business of tech.