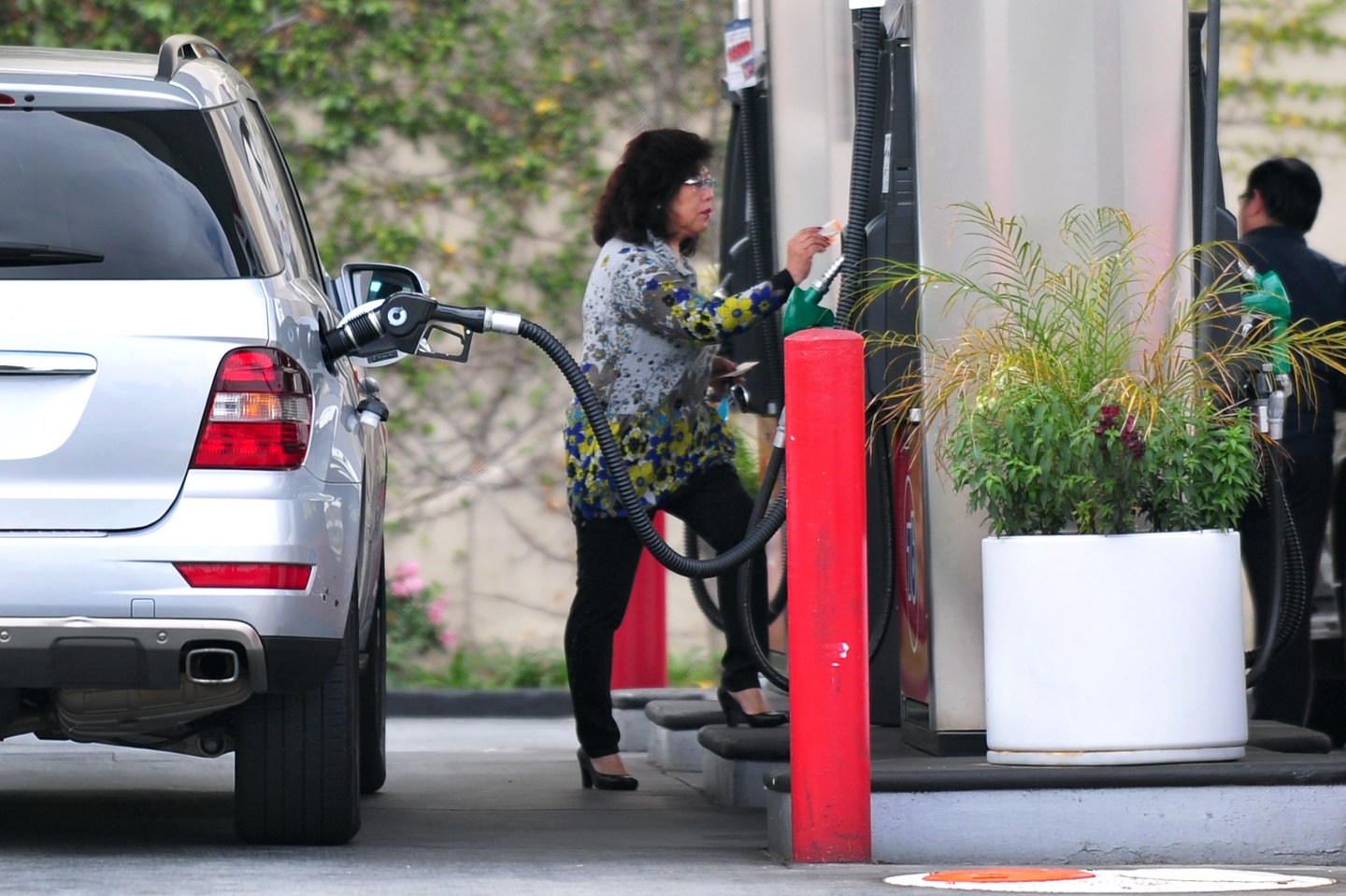 A driver pays for her gas while filling up the tank at a gas station in Monterey Park, east of downtown Los Angeles on March 13, 2012 in California, where gas prices today in Los Angeles County rose two-tenths of a cent to it's highest amount since July 2008. US President Barack Obama has blamed soaring fuel prices on fears over a war with Iran, but admitted Americans were hurting as he tries to contain fallout from rising gasoline prices, with polls showing his approval rating slumping as pain at the pump raises new doubts over Obama's reelection hopes.AFP PHOTO/Frederic J. BROWN (Photo credit should read FREDERIC J. BROWN/AFP via Getty Images)
FREDERIC J. BROWN—AFP via Getty Images

Gas stations around the U.S. are rushing to upgrade fuel pumps to accept credit and debit cards with chips after Visa and Mastercard rejected a request to delay a looming deadline to complete the work.

Beginning in October, station operators that haven’t modernized their pumps will face liability for any card fraud that happens at their businesses. The industry is “massively under-prepared,” said Joshua Smith, chief executive officer of Gas Pos, which sells point-of-sale systems.

Most retailers began to upgrade payment systems in 2015—the first of a series of deadlines set by Visa and Mastercard as the U.S. worked to catch up with nations in Europe and Asia that had long adopted the more-secure chip cards. For fuel retailers, the deadline was ultimately pushed back five years as the industry faced costs of more than $3.9 billion to do the work.

In a 2019 survey by Conexxus, a non-profit that represents convenience stores, almost 70% of respondents who own a convenience store said they haven’t upgraded any outside pumps to the new so-called EMV technology.

Few companies manufacture the required pumps. Those that do—such as Dover Corp. or Fortive Corp.’s Gilbarco Veeder-Root—have said they’re expecting an increase in sales ahead of the deadline. Once the hardware is installed, fuel companies must have the pump software certified.

Fuel retailers that don’t upgrade could face costs of as much as $201,000 per store over the next seven years, according to data compiled by Conexxus. The group expects the fuel industry to suffer $451 million of card fraud in 2020 alone.

“There’s going to be quite a surprise come October,” Laura Townsend, senior vice president of the Merchant Advisory Group, said in an interview. “Folks that have been trying to transition to EMV will be unable to because of things outside their control. But they will bear a significant increase in losses either come October or shortly thereafter because we know fraudsters will find the weakest link.”

In the Conexxus survey, more than half of participants cited a lack of available software for not having chip technology fully deployed, while about 15% pointed to a shortage of hardware. The convenience-store industry blames Visa and Mastercard for not consulting them when setting deadlines.

“The payment standard-setting process needs to be more open,” said Anna Ready Blom, director of government relations for NACS, a trade association for the convenience-store industry. “Retailers and technology companies should have been part of the planning and decision-making on chip cards from the start. If they had been, rather than Visa and Mastercard making all the decisions without understanding them fully, we wouldn’t be in this mess.”

Visa has previously highlighted its discussions with merchants when it announced its decision to extend the deadline for gas station operators in 2016.

Visa and Mastercard aren’t willing to give gas stations more time. The networks recently rejected a plea for a delay from the Merchant Advisory Group, which helps retailers navigate payment-systems issues.

“We believe extending chip technology to fuel pumps is an important step to take to protect businesses and consumers who want to pay securely as well as conveniently,” Visa said in a statement. Mastercard said it’s seeing good adoption of EMV technology and a reduction in fraud.

Visa and Mastercard began calling for a migration to chips years ago to head off counterfeit-card fraud. The underlying technology—called EMV for founders Europay, Mastercard, and Visa—generates new codes for each transaction, while the information on magnetic stripes is permanent and can be copied and stored by hackers.

More than 3.7 million merchants—or 80% of U.S. storefronts—currently accept chip cards. Since 2015, the amount of money merchants lost to counterfeit fraud has declined by 62%, according to Visa.

As gas stations start to make the switch, they’re also facing an increased threat from hackers looking to take advantage of one of the last industries that remains vulnerable to counterfeit-card fraud.

“As long as the magnetic stripe readers are in place, fuel dispenser merchants are becoming an increasingly attractive target for advanced threat actors,” Visa said in a security alert issued in November. It recommended these merchants deploy chip acceptance along with other security measures such as encryption and educating employees about phishing attacks.

—L’Oréal’s new at-home device makes personalized beauty products
—UPS’s $20 billion bet on e-commerce is paying off
—How the 2010s changed retail forever—Consumers are turning away from real fur, but faux fur is not a perfect fix
—After a decade of e-commerce, convenience just isn’t enough
Follow Fortune on Flipboard to stay up-to-date on the latest news and analysis.