The Temple of Design Doesn’t Rule This Century 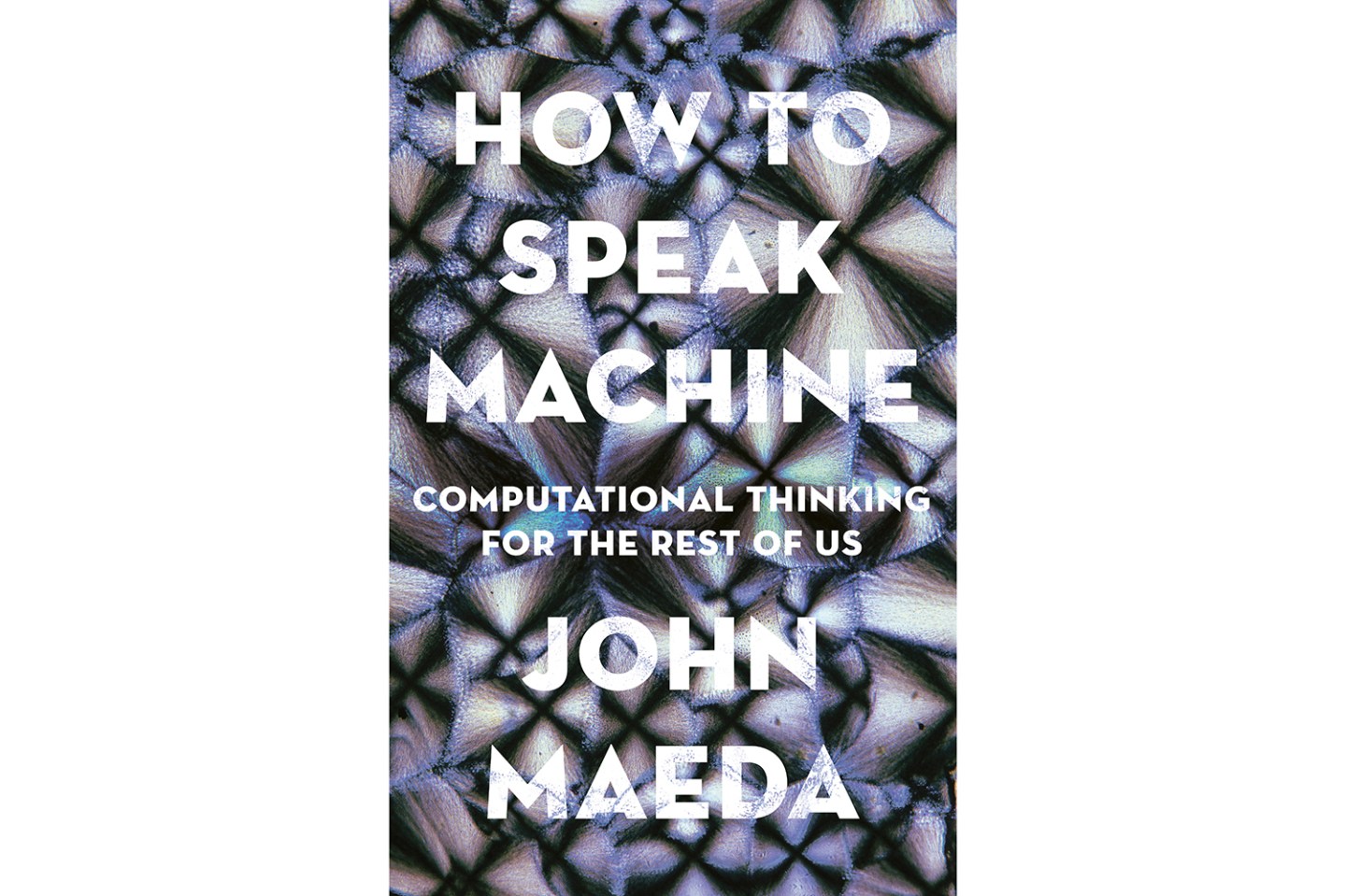 John Maeda is to design as Warren Buffett is to finance, as Wired once put it. A classically trained graphic designer, the former president of the Rhode Island School of Design, and a computer science expert who taught at MIT’s Idea Lab, he has built a career brokering the connection between design and technology. In his forthcoming book How to Speak Machine: Computational Thinking for the Rest of Us, Maeda argues that tech now dictates that the definition of quality in design is not perfection but, in fact, an unfinished product. Chair of FORTUNE Brainstorm Design Clay Chandler reviews: “How to Speak Machine is a must-read for anyone with an interest in the nexus of business, design and technology.” An excerpt from the book follows.

If design is reasoned intention, then we need to change our reasoning skills. But here’s the problem: the traditional world of design doesn’t live in the cloud, but in your beautiful living room. It’s the antique chair that your grandmother gave you. It’s the Swedish flatware you got as a wedding gift. It’s the French leather case that rests atop the aluminum table you spent more than a few months mulling over. It’s the fashion magazine you flip through while sitting on Grandma’s chair telling you that your striped outfit needs to be thrown into the fire because artist Yayoi Kusama’s polka dots are now all the rage.

This isn’t the world of the cloud at all, and yet it’s what we most love about design. Museums and galleries are filled with these objects, experiences, and highly opinionated prompts that we treasure in a way that can best be described as worshipping at the Temple of Design.

The Temple of Design isn’t an actual place, but more of a standard for knowing what great design is. In harsh, concrete terms, it is a cartel run by the museums, galleries, fashion and beauty industry, and arts education institutions worldwide that decree what great design is all about. Which is…what they say is great. And if you can’t tell it’s great, then, well, you aren’t a designer. Back when I was trying to figure out design , I fell prey to this conclusion that I wasn’t a designer despite my freshly minted MIT degree, so I went in search of the Temple of Design by simply going to art school for a degree and then much later actually running one.

I can save you some time by informing you that becoming a valid member of the Temple of Design has just two requirements: 1) you need to understand the history of design, and 2) you need to think and work like a designer. The former requirement can be met if you read a lot, visit many museums and libraries, and simply put in a few thousand hours of learning. It is painless and eminently pleasurable…..

The other Temple of Design requirement—thinking and working like a designer—is significantly harder than googling your way through design’s history….[Y]ou’ll need to actually design a few things with your own hands….Learning the minimal basics of design requires only tens of hours of practice, but being able to excel and make your way as a real-deal designer requires the proverbial ten thousand hours of deliberate practice that anoint you as “classically” trained.

As someone who’s made it through design boot camp, I can tell you that there comes an ultimate realization that there are three kinds of design styles at play embedded in the problem that you choose to solve or the manner in which you approach your solution:

The folks who get to make style are card-carrying members of the Temple of Design. It’s a comfortable place with heroes and a well-determined hierarchy. It is a world of privileged and wealthy people who determine what is desirable by virtue of simply having what others do not have because it is unusually out of reach.

Of course, I love being there for all the reasons you can imagine, but I also have a responsibility to point out that it has fallen out of touch with the computational era.

The Temple of Design has long been able to dictate what making style is all about, because the privilege of making anything for manufacture has always been a capital-intensive task. The question of what would go to production rested on the knowledge, and network, controlled by the tastemaker hierarchy. But this reliance on the rulings of a privileged few has long been under siege by the data-gathering and informal networks of rationally minded, non-Temple of Design acolytes. And the financial and influence capital made available in Silicon Valley, combined with the computational power now available to anybody, means that rationality can prevail and quality design can be had by all for an exceeding low price—as long as it’s delivered on an electronic device….

[N]othing the Temple of Design can say or do really impacts what happens with computational products today, because, frankly, the Temple of Tech has sped past it in in relevance at Moorean speed.

The doctrine of the Bauhas school was developed in response to the industrial revolution and the newfound ability to manufacture products using machinery and assembly lines in factories. Affordable appliances could finally be produced for the masses, but they were often difficult to use and didn’t fit the décor of consumers’ living spaces. So in the early 1900s the Bauhaus education program introduced superior ways to make products that were usable, desirable, and affordable—but the resulting work was not immediately met with popular acceptance. For that reason, the words of the Austrian writer and Dadaist Raoul Hausmann were especially relevant for that early period of rapid transformation:

“May the new human have the courage to be born!”

It follows that, a century later, the old Bauhaus ways must be shed to user in the new ways afforded by the new industrial revolution now under way, powered by computation. The new courage required is to steel oneself to take on the challenge of speaking machine….

Micro-improvements for computational products are constantly refreshed on a schedule as rapid as by-the-second, by-the-day, or by-the-month, where the metric of quality is more often about how often it changes than about maintaining an unchanging product that pretends to be timelessly perfect. This runs counter to the ways of the Temple of Design and its tradition of laboring over decades to consciously evolve what should end up in the history of made objects as “finished” pieces to be worshipped forever. Instead, today we are living in a real-time reality ground in computational power, fed by the clouds that have cast a shadow over the golden facades of the Temple of Design. We need to fundamentally renounce the traditional notion that design ought to aspire to completeness.

So the new definition of quality is the opposite of the Temple of Design’s definition of quality: a finished product painstakingly crafted with integrity. The new definition of quality, according to the Temple of Tech, is an unfinished product flung out into the world and later modified by observing how it survives in the wild. It’s the opposite of betting big on a brand-name designer vetted by the Temple of Design to get it heroically just right with a grand ceremonial debut, and instead gathering a team of talented nerds who can take full advantage of a new material with new properties that can transform business. It requires seismic shift toward an attitude of being “lean” (eliminating waste and favoring experimentation over perfection) and “agile” (flexibility in responding to customers’ changing requirements). Or, to put it in less techie terms, it is about proudly embracing the attitude of working incrementally and completely underwhelmingly—to send oneself on a never-ending journey of making products that can never make it into the collection of the Museum of Modern Art. So just listen to Hausmann’s sage words and let’s all have the courage to be new!

Perfection isn’t as good as understanding

For a computational product designer, waking up each morning and asking yourself how you can lower your high standards is an odd way to get started. You must accept that you’re not going to be drawing upon what you learned from browsing the latest art of design exhibition in London, Paris, or New York, but instead clocking your time card into the world of “MVP’s”—minimum viable products….Your job as an MVP-maker is to reduce your exquisitely grand idea to its most bare-bones possible form, a form which will only vaguely resemble your original vision. Your goal is to create what is perfectly appropriate for a low-cost prototype—which no self-respecting perfectionist could ever tolerate showing the public….

But the beauty of sharing an incomplete product with others is the opportunity to share it with folks who are unlike yourself. That becomes possible by virtue of network connectivity, and the fact that software can be beamed to most any device in the world. We just need to pop it into the cloud, and then anyone can access it from anywhere…. The beauty of delivering unfinished and incomplete products is that you can always improve them later. There isn’t a need to finish them right now—or ever. Look at the internet. Is it finished? Not at all. It keeps evolving with new technologies and advancements coming out practically every day.

The special people who make computational products are among you, but there are no telltale stains on their shirts, calluses on their fingertips, or any other physical evidence such as you might find with people who’ve built railroad, airplanes or any other sort of massive machinery. These software people quietly, and invisibly, move millions of numbers into place to construct machines that move, process, and transform information at high speeds and at incredible scales. Although commanding these virtual machines into existence can cause quite a power high…the disconnect with the real world is akin to being a professional gamer or drone pilot, where your immediate reality is vastly different from what surrounds you….

Given how the cloud works and the unprecedented ability to test incomplete ideas today, the MVP approach has become the dominant methodology for pushing ideas out into the world. Although the definition “Viable” is debatable and rightly in the eye of the beholder, because the folks who actually build software systems usually come from an engineering background that “V” will signify being reliable and with as few defects as possible….

A techie might be fine with rough, purely functional experience, since their tolerance for discomfort is already high to begin with. But for the general population that has high expectations for the latest cool app, it remains important to redefine “viable” as need to grant a degree of comfort and a modicum of delight….I like to use the term “MVLP,” where the “L” stands for “Lovable.”

Brokering this connection between the Temple of Tech and the Temple of Design is something I’ve been doing for most of my lifetime. And for anyone who serves a bridging role in society, you know firsthand that a bridge needs to be stepped on and tested before it can get reliably crossed. There are often times when I don’t know which temple I belong to, and I often get kicked out of one or the other depending on what I’m doing in a given year. But the awkward balance between their worlds is what has helped me understand and value both perspectives.

From HOW TO SPEAK MACHINE by John Maeda, to be published Nov. 19, 2019 by Portfolio, an imprint of Penguin Publishing Group, a division of Penguin Random House. Copyright 2019 by John Maeda.

—How 5G will transform the electric vehicle industry
—Is the future of healthcare in China?
—These brain specialists built ear pods to boost workplace productivity
—How A.I. can ease the pain of booking your next vacation—The drone farming revolution is coming to China