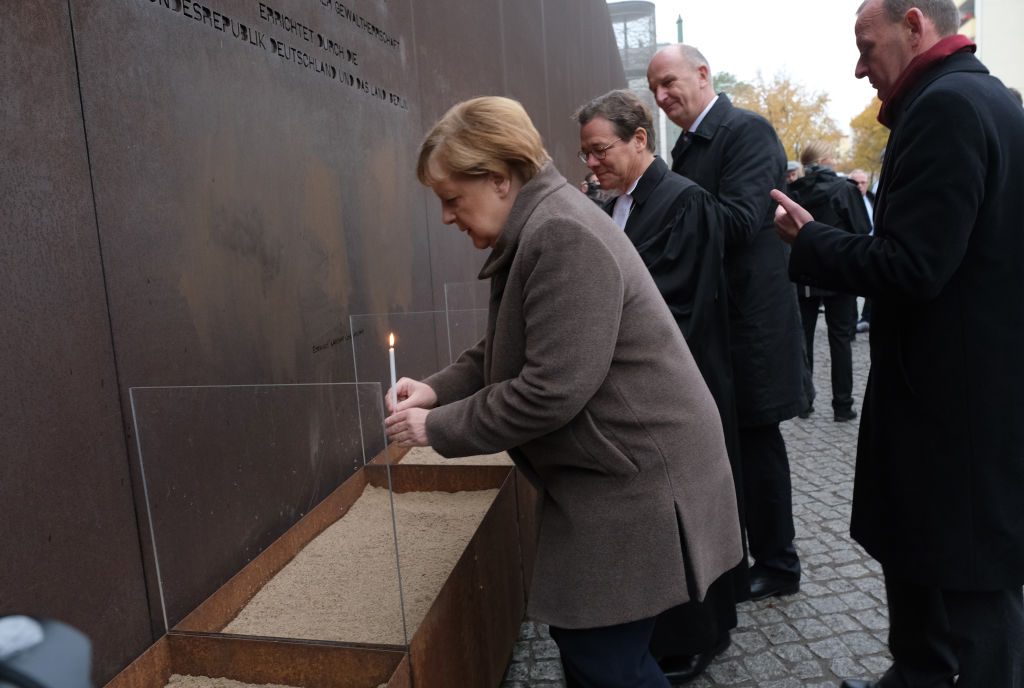 Traveling around the Rockies and listening to Bruce Springsteen seem common enough desires for young people. But consider whose dream that once was: No less a figure than German Chancellor Angela Merkel—the European Union’s powerhouse leader for the past 14 years.

Merkel told Der Spiegel magazine this week that she longed for such experiences while growing up under strict Communist rule in East Germany, sealed off from the West, until her countrymen tore down the Berlin Wall on November 9, 1989. Merkel, who was a bookish, 35-year-old chemistry researcher at the time, was marking the 30th anniversary of that seismic event, and told the magazine that the Cold War conflict still deeply marks millions of Germans. “The different life experiences in Eastern and Western Germany are a reality,” she said. “We should talk more about that and try harder to understand each other.”

Given the problems Merkel’s country faces, she might be longing these days to hit the road with rock music blasting from the stereo.

After spending the weekend celebrating 30 years of freedom and unity, Germans face the tough reality that they are still split along East-West lines—and that some schisms are even growing.

One generation on, unemployment is still nearly 30% higher in Germany’s six eastern states—once the most ideological Communist countries behind the Iron Curtain—than it is in the country’s 10 western states, according to a study by the Pew Research Center last month. Job prospects for Germans in the eastern states are far less rosy than elsewhere in the country, in part because almost no major company is headquartered in the region; not a single eastern German company is listed on the DAX-30 stock exchange index. Not surprisingly, “people in the former East Germany are… less optimistic than their counterparts in the former West on a variety of measures, including whether children today will grow up to be better off financially than their parents,” the Pew report says.

The ripple effect in Germany is profound—and not just for the economy. Disillusioned and feeling marginalized, one in five east Germans voted for the hardline nationalist party Alternative for Germany or AfD in 2017 elections—making it the first far-right political party to gain seats in the Bundestag since the end of World War II.

Two years on, Merkel now presides over a fractured country, her role as Europe’s titular leader in decline; she has said she will retire in 2022.

By then, Germany’s role as Europe’s economic growth engine could be in trouble. On Thursday, Bundesbank is due to report its official quarterly figures on the economy, but it already warned last month that the economy has probably shrunk for the second consecutive quarter. Heavily dependent on exports of cars and other industrial products, Germany’s manufacturing sector has been hit hard by the U.S. trade war with China. That has been exacerbated, according to some economists, by Merkel’s heavy resistance to increasing public spending.

“The economy is on the brink of recession,” Oliver Rakau, chief German economist for Oxford Economics, told Yahoo Finance. If that comes to pass, it would be the first recession in the 19 countries that use the Euro currency since 2013—with potentially big impact on much of Europe.

E.U. leaders are sounding a lot grimmer than they did during the weekend’s 30th anniversary celebrations in Berlin. To them, the prospect of an economic downturn could increase the rise of nationalist parties like the AfD.

“We are facing deep divides and pessimism,” French President Emmanuel Macron said on Tuesday, when he opened the second annual “Paris Peace Forum,” a sprawling two-day confab of politicians and NGOs from around the world, aimed at collaborating on issues like climate change, security, and poverty. Macron told the gathering that rising nationalism risked eroding decades of international treaties and agreements. “We are going through an unprecedented crisis in our international system. Non-cooperation would shatter what we managed to build during the past decades.”

Ursula van der Leyen, the incoming E.U. Commission President—the most powerful figure in the 28-country bloc, who is German—told the gathering that rising nationalism across the world was an urgent threat to Europe. She seemed to include the U.S. under President Donald Trump in that category; the Paris meeting included officials from across Europe, Asia and Africa, but none from the U.S.

“Existing powers are going down new paths alone,” van der Leyen said. “Europe needs to develop a common strategic culture.” She said she would push to have the E.U. spend 30% more on “external action.”

If Germany slips into a recession, such spending will be difficult to achieve. But recent studies suggest that Europe’s need to up its spending—especially on its military defense—is necessary; President Trump has threatened to cut U.S. contributions to NATO if Europe does not meet its commitment to spending 2% of its GDP on defense. And last week Macron told The Economist that he thought NATO was “brain dead,” effectively unable to act as a cohesive force.

Macron’s words brought a sharp retort from Merkel—especially since it came days before the anniversary of the Berlin Wall’s collapse. But analysts say the French leader was simply expressing what many believe: That Europe is far too dependent on U.S. power.

“Europe needs to do more, it needs to get its act together,” Fabrice Pothier, NATO’s former director of policy planning, and a senior defense consulting fellow at the International Institute for Strategic Studies, told Fortune. “The reality is that Europeans cannot ensure their own defense. If you look at their lack of capability, they can only do small scale conflicts outside Europe.”

No wonder Merkel recalled her dream of tooling around listening to Springsteen. She might begin with “Born to Run.”