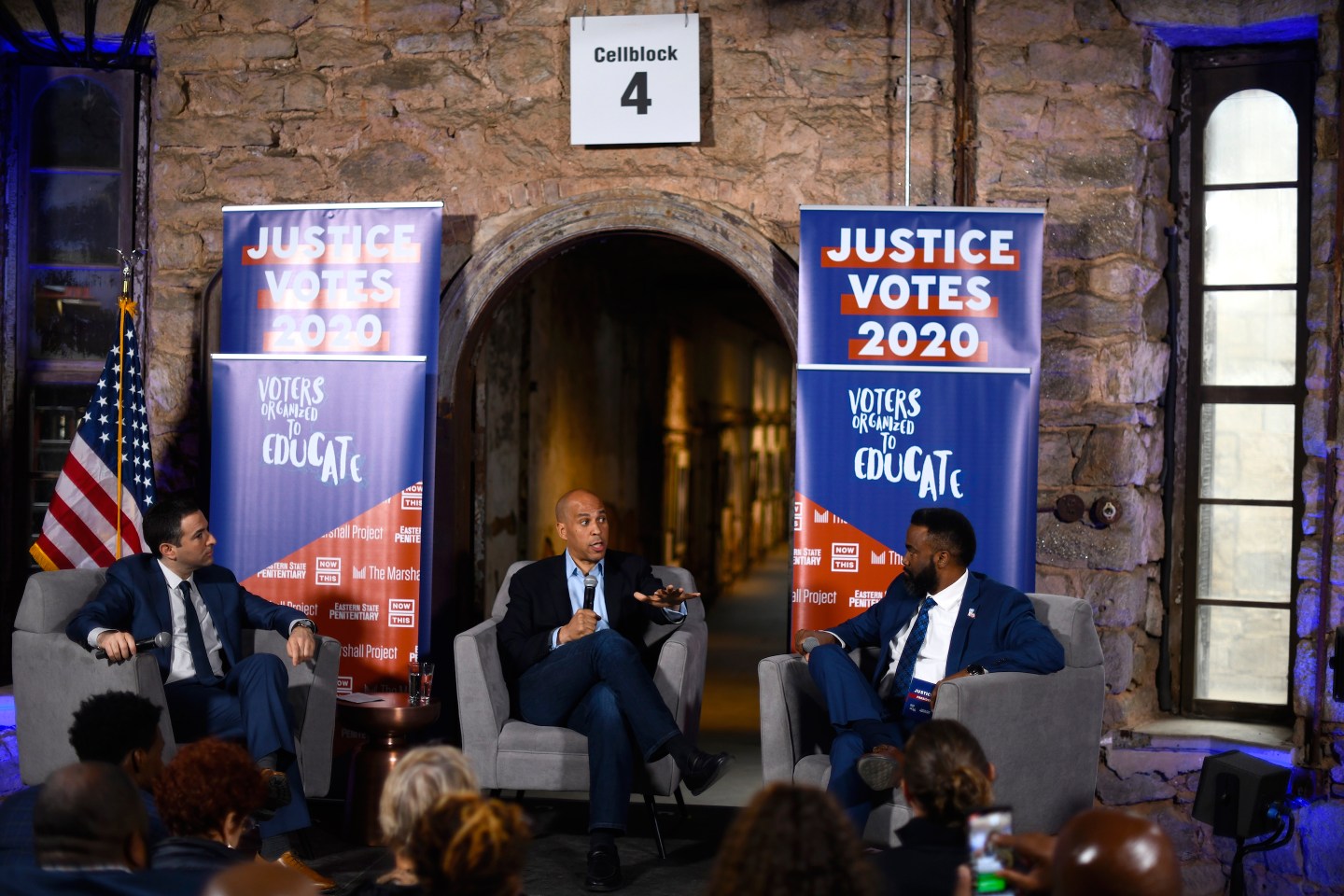 Kemba Smith was sentenced to 24.5 years in prison in 1994 for conspiracy in her boyfriend’s drug activities. She had turned herself in when she was seven months pregnant because a prosecutor falsely told her she would get a 24-month sentence, and remembers being shackled five minutes after giving birth.

“I felt not human anymore,” she said during a town-hall-style meeting organized by Voters Organized to Educate and The Marshall Project on Monday to keep criminal justice issues at the front of the 2020 race for the White House.

But only three 2020 Democratic presidential candidates showed up to the event.

On the grounds of the now-closed Eastern State Penitentiary in Philadelphia, Sen. Kamala Harris (D-Calif.), billionaire philanthropist Tom Steyer, and Sen. Cory Booker (D-N.J.), each presented themselves to an audience of formerly incarcerated people as the best choice to end private prisons, free inmates jailed on nonviolent offenses, and boost support for those reentering society.

Booker, who has been vocal in the movement to close New York’s notorious Riker’s Island jail complex and who has run expungement clinics in Newark, criticized his fellow Democratic candidates for not taking part in the event.

Organizers said Harris was the first to accept an invitation to take part in the event.

Harris, who has been challenged for her record in California as a prosecutor, assistant district attorney, and attorney general, told the audience that she took chances and pushed to put supports in place for inmates reentering society.

As California attorney general, Harris in 2013 launched a program that created a partnership between a new state division focused on helping former inmates stay out of prison, counties throughout the state and district attorneys. Among other things, the program helped steer grants toward anti-recidivism programs that were working and also supported data collection on inmates and those who became reoffenders. She also created a data collection system tracking deaths in custody.

“If we are going to be a nation that is true to our stated values, which includes a stated value to care about humanity … issues like the age-old value of redemption …then we know that the criminal justice system in America has not been humane,” Harris said at the event touted as a first between White House candidates and people who have been in prison.

Steyer said he became tuned in to issues affecting those behind bars when he was growing up in New York and his mother taught reading at the Brooklyn House of Detention. Steyer also mentioned that he was a player in California’s successful movement to abandon cash bail as a way to insure a defendant’s return to court, and rely on pre-trial assessments instead. Steyer also said that he was active in California’s movement to end automatic sentence enhancements, the state’s equivalent to mandatory minimum sentences for certain drug-related crimes.

In response to an audience member’s question, the hedge fund manager said that he’d never hired a former felon, but he added that he supports the notion that job applicants should not have to indicate whether they have a criminal justice record. Instead, Steyer said, society should look at whether someone has paid their debt to society.

“The idea of taking people and putting them in prison and throwing away the key is something that is very, very wrong,” he said.

Booker said that conditions and practices such as solitary confinement or shackling female inmates during childbirth would be considered torture or unacceptable in other countries, and that he would work to elevate conditions behind bars if elected president.

When asked why he has not supported the notion of violent offenders being able to vote in prison, Booker said he would rather not spend time on a debate that is not supported by a groundswell of Democratic lawmakers.

Booker also said he would push for “drug laws that are about restorative justice” and touted the concept of tying the legalization of marijuana to the expungement of records. He also spoke in favor of closing private prisons, including those that house immigrant detainees.

“We are in a Byzantine era the way we treat human beings,” Booker said.

Bruce Riley, a former inmate turned Louisiana-based activist working to improve conditions and rights of inmates and former inmates, said the country must move away from treating people poorly based on their pasts.

Riley said he wound up in prison because of multiple challenges during his childhood.

“Realistically, something was going to go down at some point and it did go down,” Riley said at the event. “But I am not a violent person.”

—This often-accurate election model predicts Trump will win re-election in a landslide
—Voters over 65 remember Nixon—and want to impeach Trump
—How Mitch McConnell could use impeachment to scramble the Democratic primary
—A Trump win on DACA could still be a loss for his administration
—Kids brought guns to school at least 392 times last year. What experts say we should do
Get up to speed on your morning commute with Fortune’s CEO Daily newsletter.