Maven, the Media Company That Slashed Sports Illustrated, Has Had Its Own Share of Financial Woes 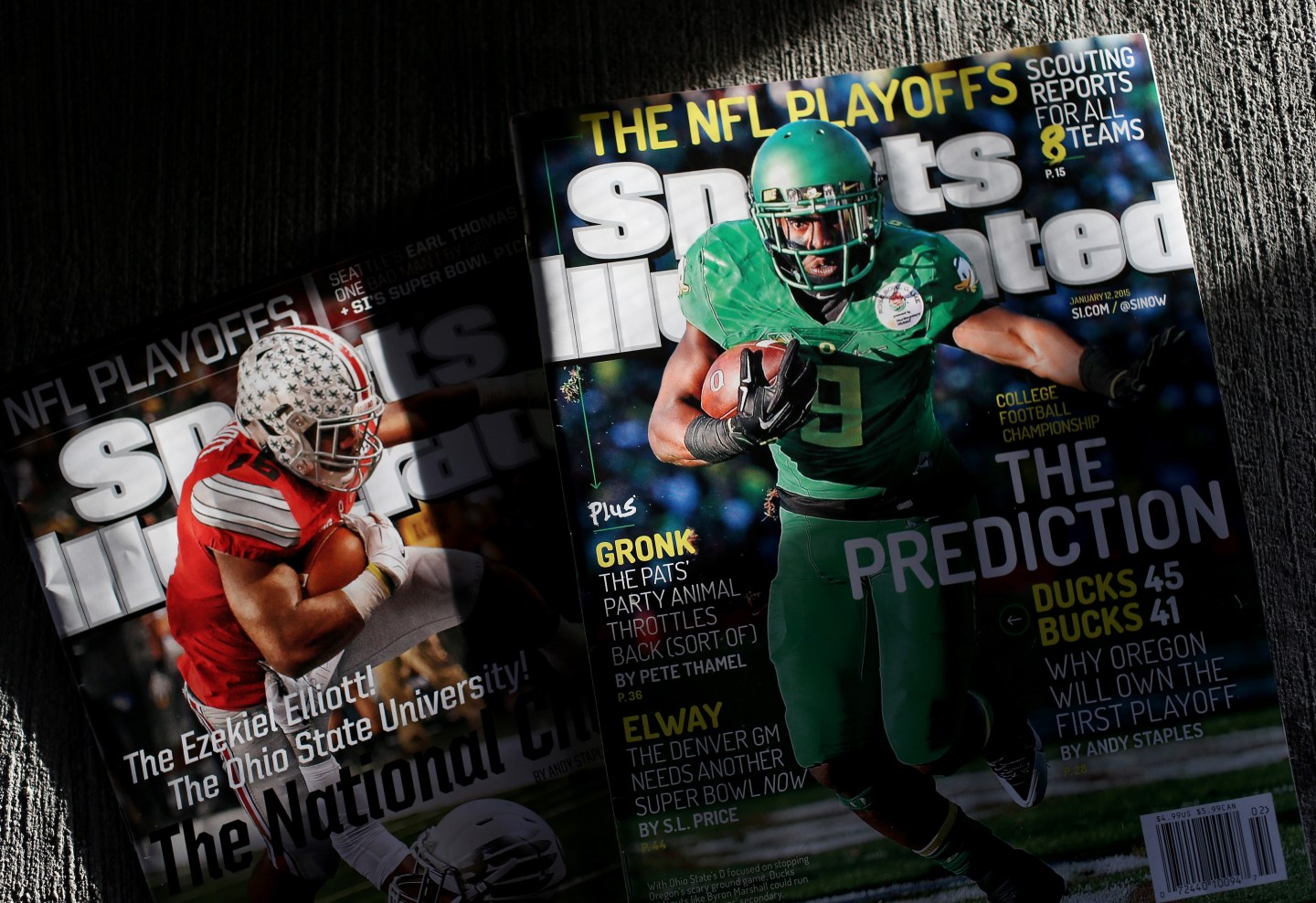 Maven, a Seattle-based digital media company, is snowballing through the media industry, growing in size and speed. It acquired the rights to publish the print and digital editions of Sports Illustrated in June for $45 million, then it bought Jim Cramer’s financial news website TheStreet in August for $16.5 million. And according to a recent presentation to investors, it’s also courting a news and politics website to expand its reach ahead of the 2020 election.

Maven was in the news earlier this month when it gutted Sports Illustrated, laying off 40 staffers and implementing an independent contractor model, many of whom will run team-specific microsites under the SI banner. And while the company’s modus operandi appears to be snatching up struggling media companies, public filings indicates Maven has had its own share of instability.

According to an SEC filing that covers the quarterly period ending June 30, 2018, Maven’s management expressed “substantial doubt about the Company’s ability to continue as a going concern within one year.” Maven’s independent public accounting firm came to the same conclusion based on the company’s financial standing as of the end of 2017. During the first six months of 2018, Maven lost more than $8 million, and in July 2018, the company borrowed $225,000 from chief executive officer James Heckman.

“Notwithstanding these recent financings, the Company does not have sufficient resources to fully fund its business operations through June 30, 2020,” the filing says. After reviewing the finances as of June 2018, the outlook was that the company needed a “significant” amount of additional capital and even that would produce no guarantee the business is self-sustainable. Maven then raised $112 million in debt and preferred stock placements between July 2018 and July 2019. On Tuesday, the company reported to the SEC it had raised an additional $20 million.

In a separate filing Wednesday, Maven quietly reported that its Josh Jacobs stepped down as president, with former COO Paul Edmondson taking over. Jacobs will continue to serve on the board of directors.

Maven only gained control of one of the most respected names in American sports journalism through a 10-year licensing agreement signed with SI’s latest owners, Authentic Brands Group (ABG) earlier in June.

Neither ABG or Maven were expected choices to own or run SI. So how did we get here?

When Meredith Corp., the legacy publisher of Better Homes and Gardens, Family Circle, and Southern Living, bought Time Inc.’s storied lot of magazines in November 2017, it was reportedly more interested in acquiring People than harder news publications like Time or Sports Illustrated. When Time was acquired by Salesforce founder Marc Benioff and his wife, Lynne Benioff, in September 2018, it was only a matter of time before SI found a home of its own. (In December 2018, Meredith finalized the sale of Fortune to Thai businessman Chatchaval Jiaravanon.)

In May, Meredith sold SI’s marketing, development, and licensing rights to ABG, a non-media company that primarily manages the merchandising for brands like Juicy Couture and Nautica, as well as the estates of Elvis Presley, Marilyn Monroe, and Muhammad Ali. Under the agreement, Meredith was supposed to retain operational control of SI for up to two years so ABG could learn the ropes of running a media company, Deadspin reported. The two-year timeline only lasted three weeks, as ABG announced it was outsourcing the operational responsibilities of the company to Maven, a relatively unknown media company run by two industry veterans, Heckman and Ross Levinsohn, both with a history of using contractors.

Maven’s idea for Sports Illustrated was simple: focus on hiring independent contractors, who are afforded no healthcare or retirement benefits like full-time staff. According to multiple people who spoke on the condition of anonymity for professional reasons and are familiar with the agreements, Maven’s starting offer is $30,000 a year for contract beat writers with unspecified bonuses for reaching certain web traffic goals. Sornsin referred to this arrangement as a “revenue-sharing model for independent journalists.” Deadspin reported that Maven executives suggested beat writers solicit unpaid labor from local colleges and universities, which Fortune has independently confirmed.

After publication, Sornsin, in an email, disputed college students were being recruited to work for free and added: “We are also hiring full-time journalists and editors and have numerous openings there, albeit reflecting our new areas of focus. SI/Meredith employees get ‘first look’ at those.” A spokesman for Maven disputed the details of the contractor setup, but did not provide further comment, instead pointing to two press releases published earlier this month.

The biggest name at Maven is Levinsohn, the former publisher of The Los Angeles Times, who was named in two lawsuits for workplace sexual misconduct, according to reporting from NPR, and who pioneered a newsroom strategy across Tronc (formerly Tribune) publications he self-styled as “gravitas with scale.” NPR’s reporting showed the model was “based on unpaid contributors and meant job losses for the traditional newsroom journalists in The Tribune publishing chain.” In a recent letter to employees made public, refuting recent reports about SI’s transformation, Levinsohn signed off as “CEO” of Sports Illustrated. Tronc cleared Levinsohn of wrongdoing after an internal investigation. Both lawsuits were settled.

Maven’s co-founder and other top executive is Heckman, who ran Scout Media, a college sports network that went bankrupt in 2016. Afterward, both Levinsohn and Heckman were sued for allegedly deceiving shareholders. The case was settled and dismissed.

According to sources familiar with the situation at Sports Illustrated, Maven will only work with independent contractors that have formed LLCs. SI contractors would essentially run their own subsite: they have names like “Bama Central” and “TheRambassador, SI branding, and are hosted on the main SI website. TheMaven executives told contractors that they may be asked to sell memberships — when TheMaven launches its forthcoming membership program — and even advertisements to appear on their website, multiple sources told Fortune. Standard journalistic norms hold that editorial creation and advertising are to be separated à la church and state.

Additionally, a contractor running a team-specific microsite who spoke on the condition of anonymity out of fear for their career said there’s no editorial oversight from Sports Illustrated’s newsroom or from Maven. And while there are some sites with multiple staffers, most are one-person shops, tasked with playing “writer, editor, and publisher.”

Sornsin said that the only sites Maven owns or manages are TheStreet.com, Hubpages.com and associated sites, and SI.com.

“All other sites utilizing our platform are independent businesses,” he said in an email. “That includes ‘niche’ channels operating within larger flagship domains, such as the team-specific channels operating on the SI.com domain.”

Sornsin said he couldn’t comment on whether Maven would have any legal liability for the team-specific channels operating as “independent businesses.”

“Generally speaking, businesses are responsible for their own activities,” he said.

“They are definitely acting to reduce their labor costs and legal responsibilities to employees,” Harper said in an email.

The NewsGuild of New York, the union representing SI’s print staffers — the digital staff has not unionized — condemned the layoffs and Maven’s management decisions earlier this month, calling Maven “clearly unfit to run this magazine.” At the print publication, 13 of 31 editorial employees were laid off, a union representative told Fortune. However, he added, “they delayed the effective date of the lay-off for the copy edit department to 12/10 after realizing they can’t actually put out a magazine without them.”

“The layoffs at Sports Illustrated yesterday was one of the most chaotic purges of talented journalists I’ve seen in two decades of my activism with the NewsGuild of New York,” said NewsGuild of New York president Grant Glickson. “We’re not done demanding better from Meredith, and we’re far from finished in holding TheMaven accountable for its actions.”

Correction, Oct. 18, 2019: An earlier version of this story incorrectly stated that Josh Jacobs had left the company.