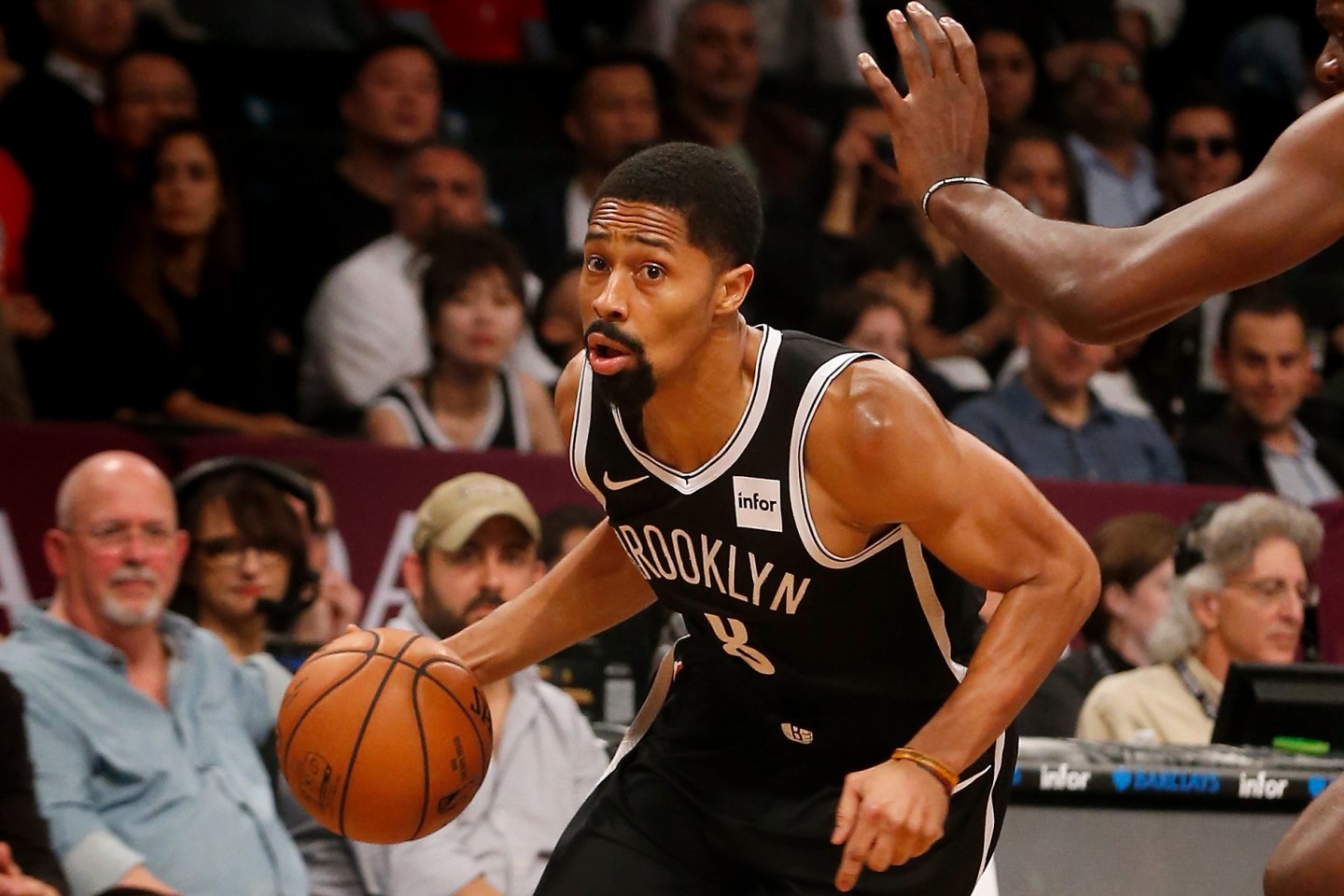 BROOKLYN, NY - NOVEMBER 02: (NEW YORK DAILIES OUT) Spencer Dinwiddie #8 of the Brooklyn Nets in action against the Houston Rockets at Barclays Center on November 2, 2018 in the Brooklyn borough of New York City. The Rockets defeated the Nets 119-111. NOTE TO USER: User expressly acknowledges and agrees that, by downloading and/or using this photograph, user is consenting to the terms and conditions of the Getty Images License Agreement. (Photo by Jim McIsaac/Getty Images)
Jim McIsaac—Getty Images

Spencer Dinwiddie has a prediction. No, it’s not about how his Brooklyn Nets squad will fare this upcoming season with Kyrie Irving and, possibly, Kevin Durant.

It’s about what he sees as the inevitable global recession. “We’re going to hell in a handbasket. We are fucked,” he says, citing the United States’ $22 trillion debt, worldwide hyperinflation, lowered interest rates, and the Fed’s potential quantitative easing. “When it drops, it’s hitting hard. Don’t do some wild shit, but be in all the non-correlated spots you can.”

To that end, the 26-year-old point guard has a non-correlated, “recession-resistant” asset to offer you: a piece of his three-year, $34 million contract extension (signed last December) in tokenized blockchain form. Dinwiddie’s venture comes in multiple parts: there’s his new investment platform for sports lovers and speculators, DREAM Fan Shares, where people can purchase a new type of debt security, the professional athlete investment token (aka PAInT). The first-ever PAInT available is Dinwiddie’s own, the SD8, that’s designed on the Ethereum blockchain. The investment round opens Oct. 14 at $150,000 apiece to accredited investors. Investors will receive monthly payments—a portion of Dinwiddie’s paycheck plus interest—beginning in December.

According to Dinwiddie, it’s a win-win situation: He gets more of his contract upfront for his personal use and SD8 holders get a share of his salary, plus interest and the potential for bonuses if he and the Nets play well. Due to legal constraints, he can’t say what those specific bonuses could be, but it’s safe to assume they include the extra money from individual honors, like an All-Star selection, to playoff appearances, which is a near-lock considering the Nets placed sixth in the Eastern Conference last season, before they added Irving and Durant. (Durant, coming off a ruptured Achilles tendon, is expected to miss most or all of the 2019-20 season.) Dinwiddie’s extension offers another potential boon, as it includes a player option that allows him to opt out after the 2020-21 season and sign a new contract at age 28, with SD8 owners receiving a share of the first year of this new payday, should it happen.

“The player option allows me to, hopefully, sign a lucrative deal in my prime, before retirement,” he says. “If you’re in a situation where you’ve played to a level where you can make more money, then you opt out and you make more money. And if you play really poorly, then you opt in and take the money that’s scheduled to be on that piece of paper. That’s the way the NBA works—it guarantees a floor for you.”

Dinwiddie, who enrolled in Harvard Business School’s “Crossover Into Business” program for athletes in 2018, knows this isn’t the first time a celebrity has tried something like this. In 1997, David Bowie introduced Bowie Bonds, in which fans could pay $1,000 for a 10-year stake in the Thin White Duke’s royalty payments, with a 7.9% interest rate. It also seemed like a win-win, with the rock star getting an immediate $55 million that he used to purchase the rights to his older songs and investors figured that people would keep buying Bowie’s music. Then, the advent of MP3s and file sharing nearly killed record sales and the bonds, which eventually recovered thanks to digital sales. While Dinwiddie’s concept is similar, he points out that his token and his scheduled payments from the Nets, which will stay the same whether or not the market crashes, make the risks much different.

Not a Bowie bond

“Bowie was bad timing. He issued a long term bond on the royalties and then music went digital and people started ripping it, so it turned into a junk bond. That was unfortunate but there was no way for him to predict that,” he says. “My offering is a three-year term. We’re not trying to tie people to me for 20 years. Unless the NBA goes out of business in three years, ain’t nothing happening to y’all. Now, how much you make depends on how I play. I want to make a bunch of money too, so don’t worry about that. As long as I don’t do anything really, really crazy off the court, everything’s going to be fine, contractually.”

While investors will have to trust that Dinwiddie handles matters off the court, they can take some measure of comfort in his safeguards. New York cryptocurrency firm Paxos will handle custody and escrow services, and Dinwiddie put $2 million in public reserves, $1 million each in gold and Bitcoin, that he can’t touch during the three-year term. “We set up the reserves and we jumped through every SEC hoop we possibly could,” he says of the eight-month planning process, during which he worked with blockchain consulting firm Saffron Solutions. “We view this scaling to a global solution, but we knew that being first, we had to do it right and we had to be safe.”

The scaling part is key to Dinwiddie. Athletes, artists, influencers, and other entertainers with their various forms of income belong in their own asset class, he says, and he hopes more will follow in his footsteps, creating their own PAInTs on DREAM Fan Shares. On top of the financial cut he’d receive from his equity in DFS, he also hopes it’s as a way for big names, particularly the athletes, to learn some financial responsibility and avoid going bankrupt, a common fate for many pros after they leave the game.

“We’ve done all this fearmongering, ‘Don’t blow your money,’ and a lot of it hasn’t worked,” he says. “People still find themselves four or five years out of the league and needing money, and that’s because you establish a lifestyle you can’t keep up with. Guys don’t want to decrease to a $10,000 a month lifestyle when they’ve been used to $75,000. I’m saying, ‘What if we are able to give them their $10 million upfront, it’s locked in a reserve account, and they live off of their endorsements and interest?’ If the endorsement money was just to have fun but their actual base lifestyle was derived out of interest from their $10 million, they’re going to be in a situation where they can continue that in perpetuity. It’s going to be that drastic shift of what you get used to and what type of habits you can instill in yourself. If you’re a great steward with your money, you can immediately get into VC. If you’re just trying to save money and live off of interest, you can do that, too. Really, it’s built to empower the player.”

The number of players who reached out to Dinwiddie is in the double digits, he says, and while he says he’ll be “judicious” about who’s going to be allowed to work with Fan Shares, it is really “built to uplift all.” He envisions some cases where you can make riskier investments on singer’s album or a player, like betting an NFL player will reach the maximum value of his contract, not just the guaranteed portion.

As the news of all this trickles out, Dinwiddie knows there are plenty of doubters—he’s seen the false reports that he’s tokenizing his entire contract, offering 10-15% returns, inventing his own currency, putting all his money in Bitcoin, and so on—but he’s not fazed.

“This is not something where I’m being radically stupid. I have a family,” he says. “I really believe it’s the birth of an asset class. It’s creating something that’s fun and easy for fans, but also really transparent because of blockchain technology. There’s a real buy-in to the asset and the intellectual property he puts on the court, that canvas that he gets to paint on every every single night when he goes out there and performs. It’s really that simple.”