The Largest U.S. Exhibit Ever About the Holocaust Opens in Downtown Manhattan 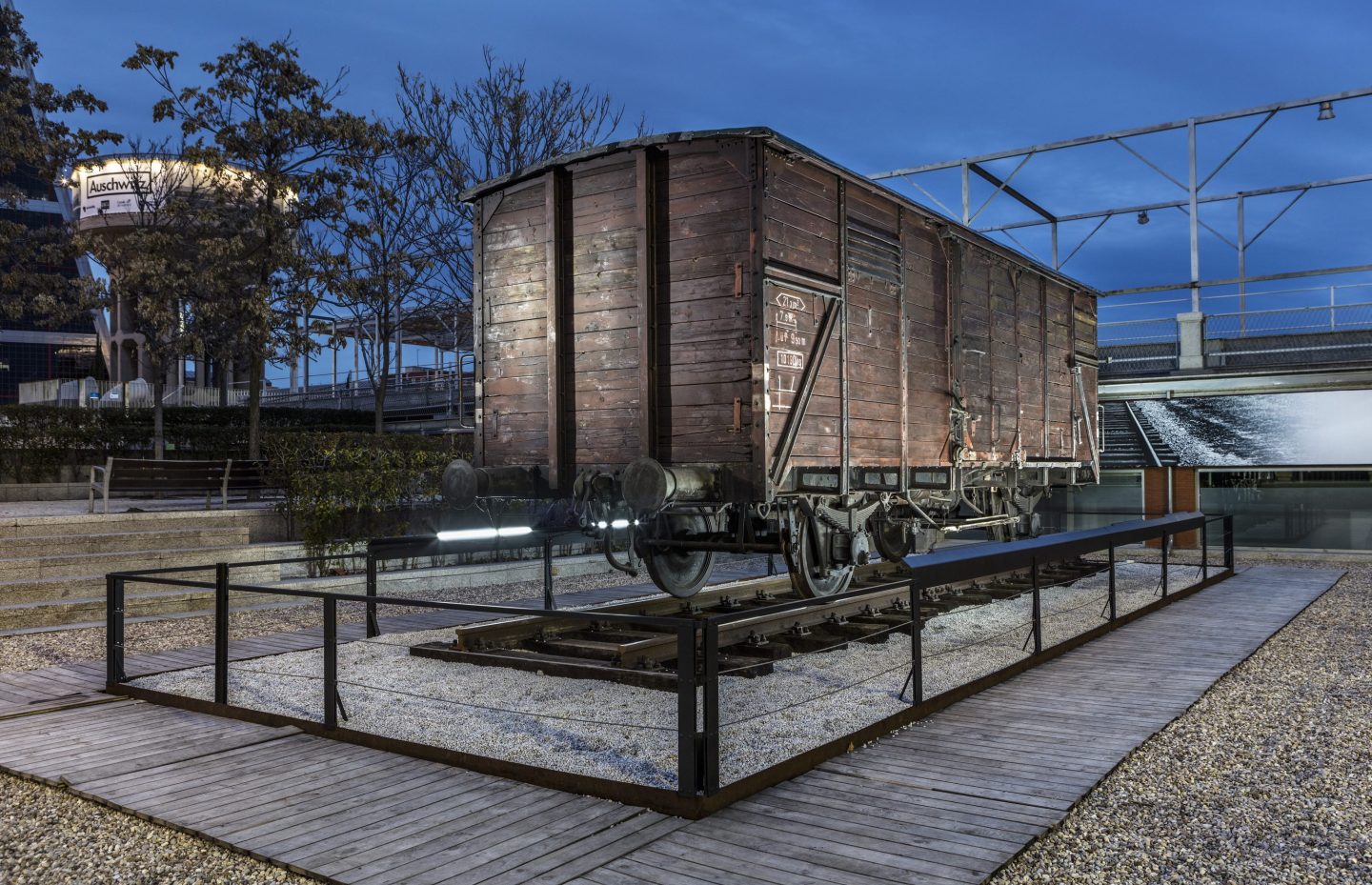 Up to approximately 80 people were crammed in a freight car when they were deported to Auschwitz. Upon their return, the freight cars, emptied of human beings, were filled with their possessions.
Collection of Musealia. ©Musealia

The social and political conditions that led to the Holocaust, the disbelief of some, the relative recency of the occurrence, and the lack of knowledge surrounding an event so important to modern history are all points that led Luis Ferreiro—a director at the family-owned, exhibition-making, Spanish company Musealia—to develop “Auschwitz: Not Long Ago. Not Far Away,” a traveling exhibit that first opened in Madrid and has now taken up residence at the Museum of Jewish Heritage in downtown Manhattan.

First, the facts: During World War II, 6 million European Jews were murdered by the German Nazi regime across a number of concentration and extermination camps all over Western Europe. Millions of others—from the LGBTQ community to the Roma to the invalid—were also brutally killed. Humans were shipped in trains like cattle to destinations unknown to them as part of one of the worst tragedies ever chronicled, many executed upon arrival in gas chambers effectively used as tools of mass murder.

Today, although confronted with artifacts, relics, the tales of survivors, and the undeniable truth about the brutalities of the Holocaust, some continue to the deny the legitimacy of history. One more fact: The liberation of the death camps, an event that coalesced with the end of the war, took place in 1945—a mere 74 years ago.

Back in 2007, Ferreiro’s brother suddenly passed in Spain. Two years later, while still reeling from his loss, Ferreiro was given Man’s Search for Meaning, by Viktor E. Frankl, about the author’s own experience as a prisoner in a Nazi camp. Although previously familiar with the Holocaust, Ferreiro credits the book as the propelling force behind the concept. “I guess if I had been a writer I would have tried to write a book,” Ferreiro says. “But [what] we know how to do is exhibitions, so I just felt this need to create [one].”

What followed were 10 years of reaching out to the likes of Paul Salmons, the show’s eventual curator, as well as the Auschwitz-Birkenau Memorial and Museum, the memorial site of the largest concentration camp, Auschwitz-Birkenau, in Poland. Partnering with the latter, a Unesco World Heritage site, gave Musealia access to more than 100 artifacts. Over 30 other institutions—including the United States Holocaust Memorial Museum in Washington, D.C., the Anne Frank House in Amsterdam, and smaller private collections around the world—lent materials as well.

The exhibit opened in Madrid in December 2017. Originally conceived as a six-month stint that would relocate to New York for a period before its next stop, the Spanish run was so successful (an estimated 600,000 people visited the space), it was extended twice.

Now in New York City, it is set to stay put through Jan. 3, 2020, before moving to an as yet-to-be-disclosed location.

If a visit on an average Sunday in the summer is any indication, Ferreiro and his associates’ work has clearly paid off. Cagey about specific statistics concerning the number and origin of visitors, Jeff Simmons, in charge of the exhibit’s communications and public relations team, reveals that, since its opening, more than 60,000 people have made the pilgrimage to downtown New York to visit. “Visitors have come from across the country and from abroad and, to date, are from more than 30 countries,” Simmons writes in an email.

Both in Spain and in the U.S., questions about a guest’s religion are left untapped—a fact deemed of little significance. “In a way, it’s more important for non-Jewish people to visit,” says Ferreiro, who isn’t Jewish. “Because, of course, Jews are the victims, but the illness of hatred, in this case of anti-Semitism, is in the bodies of others. So I think it’s important for us as non-Jews to actually be very aware that we are the ones that carry or could potentially carry this seed of hatred.”

Salmons, also not Jewish, echoes Ferreiro’s sentiments: “It’s important to show that the victims didn’t just appear in history as murder victims,” he says. “This was a catastrophe for world civilization. If we’re going to understand how and why it happened, we have to look beyond the Jewish world of Europe to understand the history, the people that actually created this genocide and were complicit in it. There are a lot more people that are involved in this history than the victims themselves.”

The New York exhibit is spread throughout three different floors. (Slight changes are made to the show as it travels from one city to the next.) Although focusing on the tragedies that came to define Auschwitz, the organizers make a point to explore the social and political changes that allowed for the crimes to be committed. Visitors are confronted with relics: from a prisoner’s jacket from the Sachsenhausen concentration camp to a buckled red shoe belonging to a woman we know nothing about, to a pair of socks padded by Barbara Gamzer while in hiding to muffle her child’s footsteps.

Horrific tales of familial misfortunes are also exposed, like the story of Alfons and Felicia Haberfeld, once owners of a successful 100-year-old liquor factory. In 1939, they decided to board an ocean liner to New York City to bring samples to the World’s Fair. When gearing up to return to their 2-year-old daughter and her grandmother in Poland, war broke out. The Haberfelds never saw their child again: She was sent to a concentration camp and immediately murdered.

Equipped with an audio guide, a walk through the space (an average visitor spends two hours here) is a wretchedly sorrowful one, eliciting tears and incredulity: How could human beings be capable of such blind hatred?

That’s one of the questions that Salmons hopes folks will ponder. “I hope people will become more sensitive to those stereotypes and have a better understanding of the truth and the lies and the position of the Jewish people in the world,” he says. “The Holocaust is more than Auschwitz.”

As for Ferreiro, he stresses the importance of understanding that “anti-Semitism was not invented by Hitler or the Nazis,” he says. “Auschwitz did not start with the gas chambers. The gas chamber is the final step of the many different small steps, and that responsibility is shared. Genocide is a social act that implies the collaboration of the cultural, scientific, bureaucratic elites of a country and cannot be done without the silent complicity of the vast majority of people.”

Conversations about social repercussions naturally lead to talks about current regulations in Poland that seek to erase the country’s complicity in these events. Just last year, Warsaw passed a law prohibiting people from blaming Poland for Holocaust-related atrocities—a fact that has obviously influenced the way the Auschwitz-Birkenau Memorial and Museum is structured. “It can be very difficult for any country to confront difficult issues in their own past,” Salmons says, acknowledging the existence of the law. “There have been concerns … But the museum has tried to tell the story in fullness.”

The last chapter of that story has yet to be written, as ripples of hatred have steered the course of humanity and will likely continue to do so endlessly—a fact not lost on Ferreiro: “History sends signs and, hopefully, when the winds change in our own situation, people will be able to stand up and say no, this is something that we are not going to allow to happen [again].”

—Where you should eat, visit, and stay on your trip to Copenhagen

—Why you should visit southern India on your next vacation