Why WeWork Is Raising More Debt Ahead of Its IPO: Term Sheet 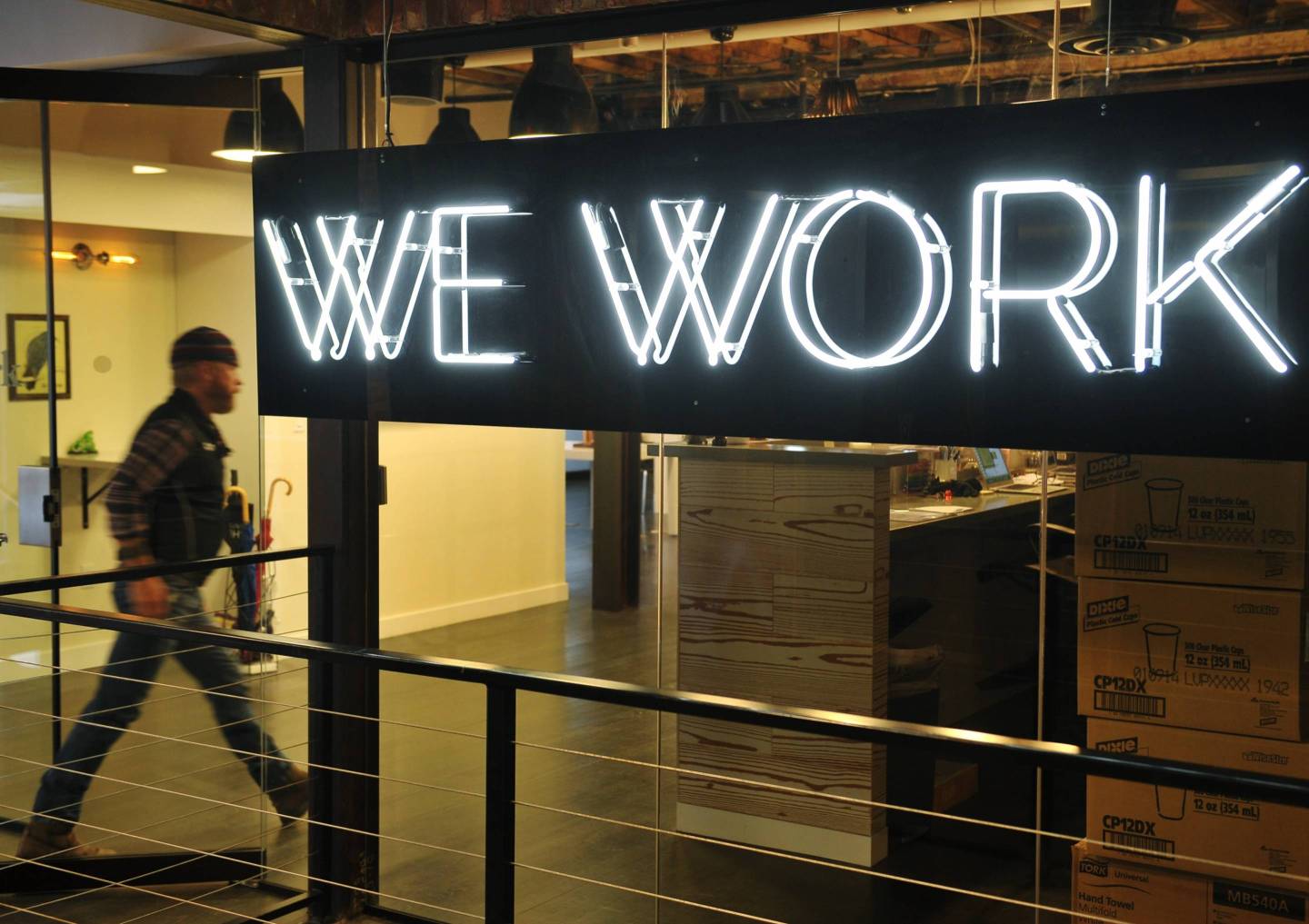 A man enter the doors of the "WeWork" co-operative co-working space on March 13, 2013 in Washington, DC. In a large warehouse-type office in Washington, software coders work on apps, while angel investors and mentors help budding entrepreneurs figure out strategy for their startups, in what is being dubbed Silicon Valley on the Potomac. AFP PHOTO/Mandel NGAN (Photo by MANDEL NGAN / AFP) (Photo credit should read MANDEL NGAN/AFP/Getty Images)
Mandel Ngan—AFP/Getty Images

WeWork plans to raise more money ahead of its highly anticipated IPO. The co-working behemoth will raise as much as $4 billion in debt in the next few months through a debt facility that could grow as big as $10 billion over the next several years, according to The Wall Street Journal. ...And why? To “shore up confidence in its business” before going public. Huh 🤔.

Yes, the company that boasts “eye-watering losses” — having lost $1.93 billion on $1.82 billion in sales last year — is yet another unicorn ready to make its public market debut despite never having turned a profit. But the WSJ notes that it plans to offer billions of dollars in debt that would fund its growth until it can turn a profit. Huh 🤔.

“The cash from this debt facility could help shore up demand for the IPO, people familiar with the planned deal said, in part by showing the company will be able to fund growth for years without having to turn again to equity markets,” the article notes.

In other words, by raising billions in new debt, WeWork would theoretically have less of a need to raise money from potential public stockholders. I’ve written previously about this “growth at all costs” strategy where some tech startups seem to be shielded from expectations of profitability. Because who cares if you’re losing billions of dollars as long as you’re growing?

As one Term Sheet reader said, “They used to say cash flow covers a multitude of sins… now it appears to be cheap, abundant capital. Is that sustainable? Probably not.”

‘VC ENVY:’ Private equity firms have long invested in more established parts of the healthcare sector — such as hospitals and medical device manufacturing businesses that produce steady cash flows which can be used to pay off the debt used for acquisitions. But in the last two years, PE has turned to investing in life sciences and big pharma, according to The Financial Times. That’s tough because of the obvious mismatch between the investment cycle and the drug development cycle.

“Private equity has VC envy,” the head of life sciences at one major private equity firm told the FT. “All the buyout firms are looking at doing growth equity and that takes them to life sciences. They are taking advantage of big pharma’s shortcomings.” Read more.

UNICORN CLASS OF 2019: In 2015, Fortune wrote a feature about a new phenomenon called “the unicorn” — a company that has soared to a $1 billion private valuation or higher. At the time, Slack CEO Stewart Butterfield said, “Yes, it’s arbitrary because it’s a big round number. It does make a difference psychologically. One billion is better than $800 million because it’s the psychological threshold for potential customers, employees, and the press.”

Fast forward four years and tech unicorns are no longer a rare breed. They have become as common as pigeons in New York City. In 2015, there were a total of more than 80 unicorns overall. And just halfway into 2019, we’re at 49 new startups that passed the $1 billion mark so far this year, according to Pitchbook. The new class of unicorns include some that you know (Casper, Lemonade, and Glossier) and some that you might not have heard of before (N26, Doctolib, and Meero). See the full list on Pitchbook.com.

- Soldo, a London-based spend management application software for businesses, raised $61 million in Series B funding. Battery Ventures and Dawn Capital co-led the round, and were joined by investors including Accel and Connect Ventures.

-  Dott, a Netherlands-based micro-mobility company, raised €30 million ($33.7 million) in Series A funding. The EQT Ventures fund and Naspers co-led the round, and were joined by investors including Axel Springer Digital Ventures, Felix Capital, FJ Labs, and U-Start Club.

- Employment Hero, an Australia-based cloud-powered people management platform, raised AU$22 million ($15.4 million) in Series C funding at a valuation of $69 million. SEEK led the round, and was joined by investors including OneVentures and AirTree Ventures.

- Kyash Inc, a Japan-based creator of a wallet app and payment platform, raised about $14 million in Series B funding. Goodwater Capital led the round.

- Intercorp Financial Services, a Lima, Peru-based financial services firm, filed for an $423 million in an initial public offering, selling 9 million shares priced between $44 to $50 (87% sold by insiders). The company now trades on the Lima Stock Exchange as “IFS” at about $46.01 apiece. It posted net interest income of about $949.6 million in 2018 and profit of $328.9 million. Intercorp Peru backs the firm. It plans to list on the NYSE as “IFS.”

- Dynatrace Holdings, a Waltham, Mass.-based enterprise cloud platform, filed for a $300 million in an initial public offering. The firm posted  $431 million in revenue for the 12 months ended March 2019 and loss of $166.2 million. Thoma Bravo Fund backs the firm. It plans to list on the NYSE as “DT.” Read more.

- Medallia, a San Francisco-based enterprise customer experience platform, plans to raise $246.5 million in an IPO of 14.5 million shares (8% insiders selling) priced between $16 to $18. It posted revenue of $313.6 million and loss of $82.2 million. Sequoia Capital (41% pre-offering) backs the firm. It plans to list on the NYSE as “MDLA.” Read more.

- Phreesia, a New York-based software platform for healthcare providers, plans to raise $125 million in an IPO of 7.8 million shares priced between $15 to $17. The firm posted revenue of $99.9 million and loss of $45.3 million in the year ending Jan. 31. 2019. LLR Equity Partners (24% pre-offering), HLM Venture Partners (17.3%), and Polaris Venture Partners (15%) back the firm. J.P. Morgan, Wells Fargo Securities, William Blair, Allen & Company and Piper Jaffray are underwriters. It plans to list on the NYSE as “PHR.” Read more.

- Sundial Growers, a Canadian cannabis producer, filed for an $100 million IPO. It plans to list on the Nasdaq as “SNDL.” Read more.

- Vista Oil & Gas, a Mexico City-based oil and gas firm, filed for an $100 million IPO. The firm posted revenue of $331.3 million between April 4 to December 2018, and loss of $29.1 million. Riverstone Holdings and Abu Dhabi Investment Council back the firm. It plans to list on the NYSE as “VIST.” Read more.

- RAPT Therapeutics, a South San Francisco-based biotech firm creating therapies for cancer and inflammatory diseases, filed for an $86 million IPO. The Column Group (34.7% pre-offering), KPCB Holdings (20%), and Topspin Fund (12.2%) back the firm. It plans to list on the Nasdaq as “RAPT.” Read more.

- Fulcrum Therapeutics, a Cambridge, Mass.-based clinical-stage biotech developing therapies for rare diseases, plans to raise $76.5 million in an IPO of 4.5 million shares priced between $16 to $18. The firm has yet to post revenue and posted losses of $39.1 million in 2018. Third Rock Ventures (43.2% pre-offering), GlaxoSmithKline (9.5%), and Foresite Capital (8%) back the firm. Morgan Stanley, BofA Merrill Lynch, and SVB Leerink are underwriters. It plans to list on the Nasdaq as “FULC.” Read more.

- Kura Sushi USA, an Irvine, Calif-based Japanese revolving sushi chain, filed for an $58 million IPO. It posted sales of $51.7 million in the year ending Aug. 2018 and profit of $1.7 million. Kura Japan backs the firm. It plans to list on the Nasdaq under the symbol “KRUS.” Read more.