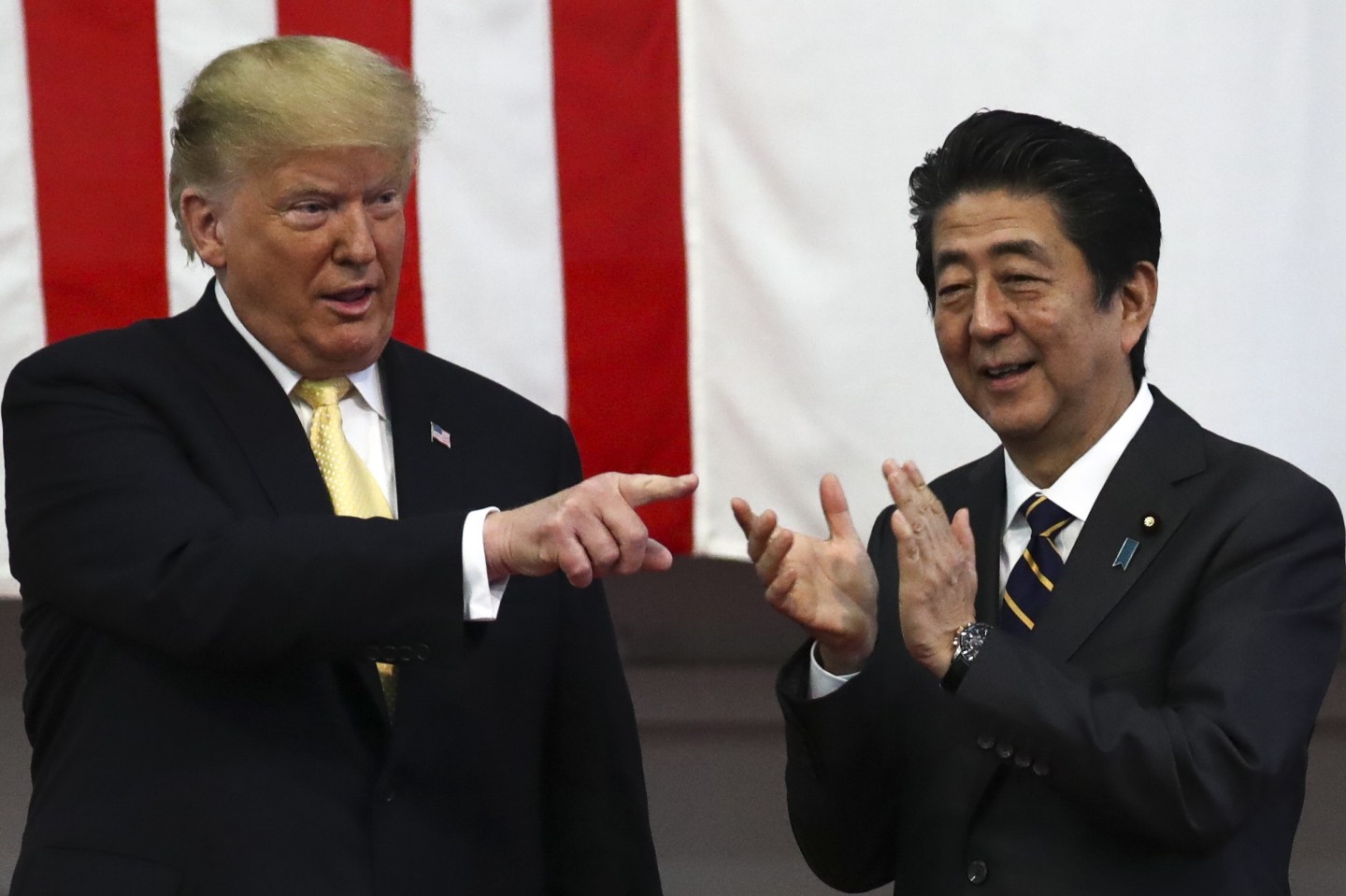 Those hoping for political leadership in the face of the climate emergency are in for yet more disappointment, with the G20 group of powerful nations possibly set to avoid strong commitments to tackling the issue.

The G20 will hold a summit in Osaka, Japan later this week. According to the Financial Times, which saw the draft communiqué prepared by the Japanese government, the document avoids phrases such as “global warming” and “decarbonization” in an apparent capitulation to the demands of the U.S.

The climbdown comes as the U.S. and Japan are engaged in trade talks, and the FT cited analysts as saying Japan was trying to “placate” the Trump administration on that front. If the talks fail, President Trump is likely to hit the country with tariffs on its economically crucial auto sector.

Japan would also like the U.S. to apply more pressure to the North Korean regime, which poses a threat to Japan.

The G20 communiqués of the last couple years have endorsed the Paris climate accord while allowing the U.S.—which intends to withdraw from the pact—to make a separate statement about its climate position.

This time, the draft statement to be issued by the entire G20 seems to toe the Trump administration’s line, by avoiding endorsement of the Paris goals. The main thrust of the 2015 Paris agreement was to limit the Earth’s temperature rise to “well below” 2 degrees Celsius, above pre-industrial levels.

It’s important to note that the final G20 communiqué may be different, once G20 countries’ negotiators influence the text—Japan wrote the draft because it currently holds the G20 presidency.

However, as noted in figures released Monday by the Overseas Development Institute, a U.K. think tank, the G20 countries have almost tripled coal subsidies in recent years, despite promising a decade ago to phase out fossil fuel subsidies. The biggest culprits for recent coal subsidy increases? China and India, then Japan, then South Africa, South Korea, Indonesia, and the U.S.

Japan last month issued a long-term climate strategy that included the goals of cutting emissions by 80% by 2050, compared with 2010 levels, but the plan did not have much to say about moving away from coal. As for net-zero emissions, the strategy only committed to achieving this “as early as possible in the second half of this century.”

If the G20 does reverse course on the issue of emissions, it will be the second major setback to the climate fight in as many weeks.

Last Friday, the EU’s member states failed to back the goal of achieving a net-zero carbon footprint by 2050.

Four countries—Poland, Czechia, Estonia, and Hungary—blocked the goal’s inclusion in the EU’s strategic agenda for the next five years. The conservative-run, post-communist states argued that the measure would be too extreme for their economies, which are still largely run on coal.

“Poland…must first have very detailed compensation packages. We must know how much we can get for modernization,” said Polish Prime Minister Mateusz Morawiecki, according to Al Jazeera.

Last year, carbon emissions rose at the sharpest rate in seven years—that’s according to figures released this month by the oil giant BP.

The Arctic’s permafrost is thawing out seven decades before it was expected to, which may reinforce a climatic feedback loop by releasing huge amounts of trapped greenhouse gases.

And on Friday, which is also the first day of the G20 summit, a top United Nations human rights expert will present a report that warns of the impacts of global warming on people’s rights to life, housing, water and food, and perhaps democracy itself.

“The risk of community discontent, of growing inequality, and of even greater levels of deprivation among some groups, will likely stimulate nationalist, xenophobic, racist and other responses. Maintaining a balanced approach to civil and political rights will be extremely complex,” reads Philip Alston’s report, according to the Guardian.

“States have marched past every scientific warning and threshold, and what was once considered catastrophic warming now seems like a best-case scenario.”