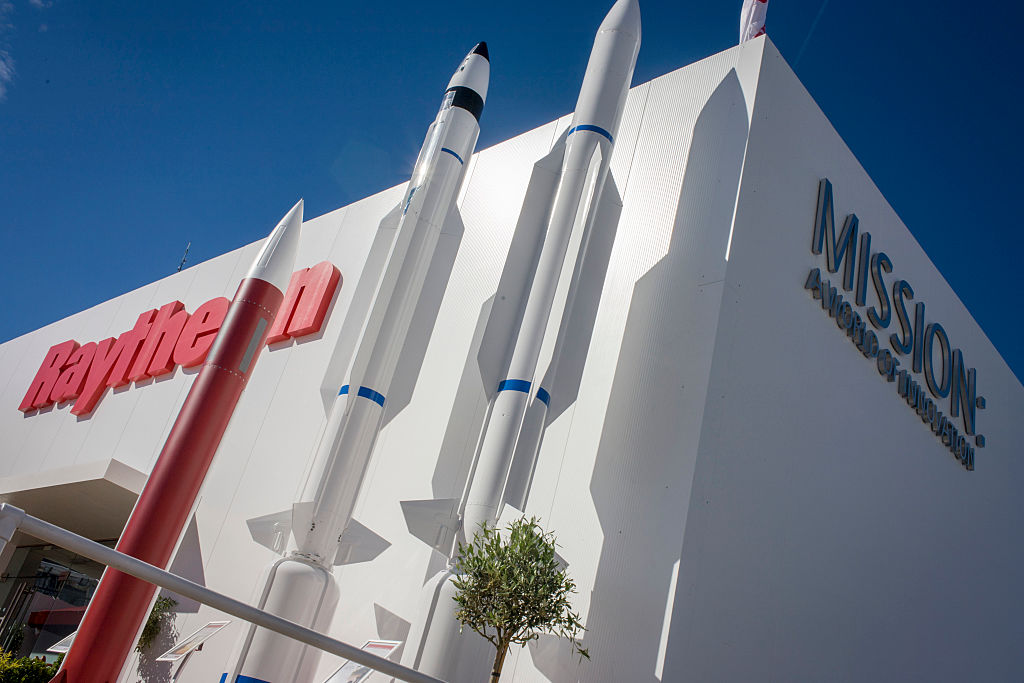 Defence manufacturer Raytheon exhibition stand at the Farnborough Air Show, England. Raytheon Company is a technology and innovation leader specializing in defense, security and civil markets throughout the world. With a history of innovation spanning 92 years, Raytheon provides state-of-the-art electronics, mission systems integration and other capabilities in the areas of sensing; effects; and command, control, communications and intelligence systems. (Photo by In Pictures Ltd./Corbis via Getty Images)
Richard Baker—Corbis via Getty Images

United Technologies Corp. agreed to buy Raytheon Co. in an all-stock deal, forming an aerospace and defense giant with $74 billion in sales in one of the industry’s biggest transactions ever.

The new entity will be called Raytheon Technologies Corp. when the deal closes in the first half of 2020, after United Technologies completes the separation of its Otis elevator and Carrier air-conditioner businesses, the companies said in a statement Sunday. While billed as a merger of equals, current United Technologies shareholders will own most of the company after the transaction, which has an equity value of $86 billion, according to data compiled by Bloomberg.

The combination “will define the future of aerospace and defense,” United Technologies Chief Executive Officer Greg Hayes said in the statement. The bigger company will combine United Technologies’ Pratt & Whitney F-35 fighter jet engines with Raytheon’s Patriot missile-defense products and expertise in areas such as radars, munitions and cybersecurity.

Both companies’ shares stand to benefit because of the potential synergies, which could free up capital that may be deployed, Jefferies wrote in a note.

In pre-market trading, United Technologies rose 6.5% to $140.70, while Raytheon was 2.8% higher at $191.16. Each advanced more than 20% this year through June 7, in line with a Standard & Poor’s index of aerospace and defense manufacturers.

United Technologies makes both commercial and military engines, while Raytheon is focused most on defense, according to Rothacker.

Hayes will hold the CEO job in the combined organization, while Raytheon CEO Thomas Kennedy will become the executive chairman. Hayes will ascend to both roles three years after the deal closes.

United Technologies isn’t paying a premium for Raytheon, taking into account the separation of the Otis and Carrier businesses, according to a person familiar with the matter, who asked not to be identified because the information is private. A conference call is scheduled for Monday morning.

The blockbuster deal caps a dramatic revamp of United Technologies under Hayes, who took the reins at the industrial conglomerate in 2014 with a vow to pursue big transactions. Along with last year’s $23 billion acquisition of aircraft-parts supplier Rockwell Collins, the Raytheon deal remakes United Technologies as an aerospace giant with products including not only jet engines and missiles but other items like cockpit electronics and radars.

Greater heft would enhance the ability of United Technologies to withstand cost pressures from customers such as Boeing Co. and Airbus SE, said Rothacker, the Bloomberg analyst. Another crucial customer is the U.S. Department of Defense.

“Aerospace suppliers have been, and will continue to be, under immense pressure from Boeing and Airbus to cut costs,” he said. “We’ve seen consolidation in the sector as a way to counter these pricing and competitive pressures, and also to diversify to add revenue streams.”

Another wildcard in winning approval for the deal: the U.S. Department of Defense.

Hayes spurned a merger offer from Honeywell International Inc. in 2016, saying the deal undervalued his company and would face customer opposition. At the time, Wall Street analysts anticipated resistance from the Pentagon, as well as planemakers.

“We don’t expect DoD to raise strong objections to the deal,” though there may be small divestitures where there’s overlap with businesses picked up with the Rockwell Collins purchase, analyst Byron Callan of Capital Alpha Partners wrote in a note Sunday. Some of that overlap may not be readily apparent because programs are classified, he wrote.

The companies will have combined debt of about $26 billion when the deal closes, with about $24 billion of that coming from United Technologies, the companies said in their statement. There is no change to the 2019 financial outlook for either company.

The companies said they expect to return $18 billion to $20 billion to shareholders in the first 36 months after the merger and to see about $1 billion in annual cost savings by the fourth year.

The headquarters will be in the Boston area; currently United Technologies is based on Farmington, Connecticut, while Raytheon’s headquarters is in Waltham, Massachusetts.