This African Safari Was Founded Before Ecotourism Was Trendy 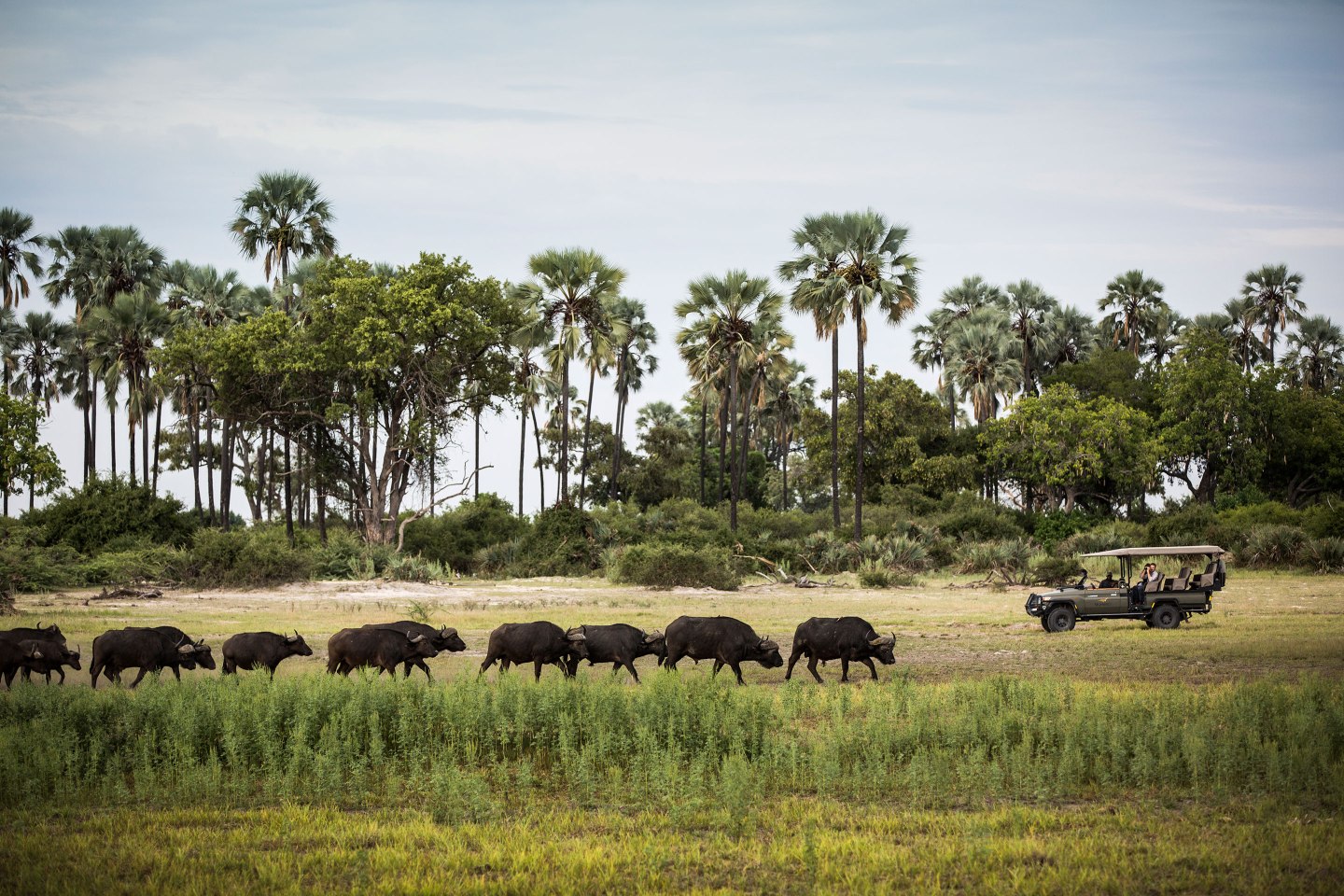 A buffalo herd commuting to a water hole in Mombo camp in Botswana. Photo by David Crookes
David Crookes

Mombo. It’s a name synonymous with watching the world’s most majestic wildlife. The remote camp in Botswana’s Okavango Delta set the benchmark in luxury lodging when Wilderness Safaris, the industry’s pioneering ecotourism outfitter, took the reins in 1999. By boldly deviating from the once-rustic standards in the delta, the company transformed the camp into an upscale destination with five-star comforts—all while maintaining an uncompromising focus on low-footprint design and operations.

Nineteen years and a fourth renovation later, all the premium trappings are still dutifully considered. Mombo’s ­latest iteration has private, shaded verandas with individual plunge pools and plush daybeds overlooking the floodplains, indoor and outdoor showers, generously stocked bar carts, and even an on-site wellness center—all of which is 100% solar powered.

With rates starting at $1,990 a night per person, such comforts are certainly expected. But high thread counts and copper bathtubs are only part of the Wilderness appeal. “Our competition is any tourism destination on the planet, not just Africa,” says CEO Keith Vincent, who joined the company in 1993. “While the camp is spectacular, and you don’t want for anything, it could never be the only draw.”

That’s why the company’s stated mission is to conserve and restore Africa’s wilderness: no animals, no safari. This is achieved in several ways. Hosting a small number of well-paying visitors means not only unobstructed game viewing but also mitigating disruption to the animals and their habitat. The company sets up in remote, under-visited, and biodiverse locales where it can rehabilitate the land and facilitate the return of large animal species. Its nonprofit arm, the Wilderness Wildlife Trust, has funded more than 100 conservation projects in the past decade.

A notable success of the Trust is its rhino reintroduction program. If travelers have the privilege of observing white and black rhinos during their game drives throughout the Mombo concession today, it’s because of the partnership between Wilderness, Botswana’s Department of Wildlife, and the Botswana government. Their collaborative operations in translocation and anti-poaching brought black rhinos back from localized extinction.

But conservation is about people too. Bill Given, a wildlife biologist and founder of the Wild Source, a safari agency, says Wilderness’s attention to community empowerment is a major reason he recommends the outfitter to clients. Given mentions Children in the Wilderness, a program built around life skills and environmental education for children residing in neighboring villages. “It’s a brilliant opportunity for children to experience the treasure of wildlife in their region and have that be positive,” he says. “This can be rare in areas where the only wildlife experiences for locals are in conflict with animals.” More than creating jobs for locals—which Given points out is a prerequisite for operating—the program’s goal is developing the environmental leaders of tomorrow.

In an industry in which “greenwashing” is prevalent, Wilderness has earned a reputation as more of a conservation company funded by tourism than a traditional ­safari ­operator. That’s important for many travelers. Sixty percent of Americans said they were concerned with the sustainability of their leisure travels, according to a 2016 survey by travel website Skift.

Far from resting on that reputation, Wilderness has bold ambitions. “We’re looking into areas that have been devastated from years of war—areas that could potentially hold another 100,000 elephants in 20 years’ time,” says Vincent excitedly. “Isn’t that tremendous?”

A version of this article appears in the May 2019 issue of Fortune with the headline “An Adventure With Purpose.”