They’re the World’s Best Recyclers. Even They’re Confounded by the Scourge of Plastic 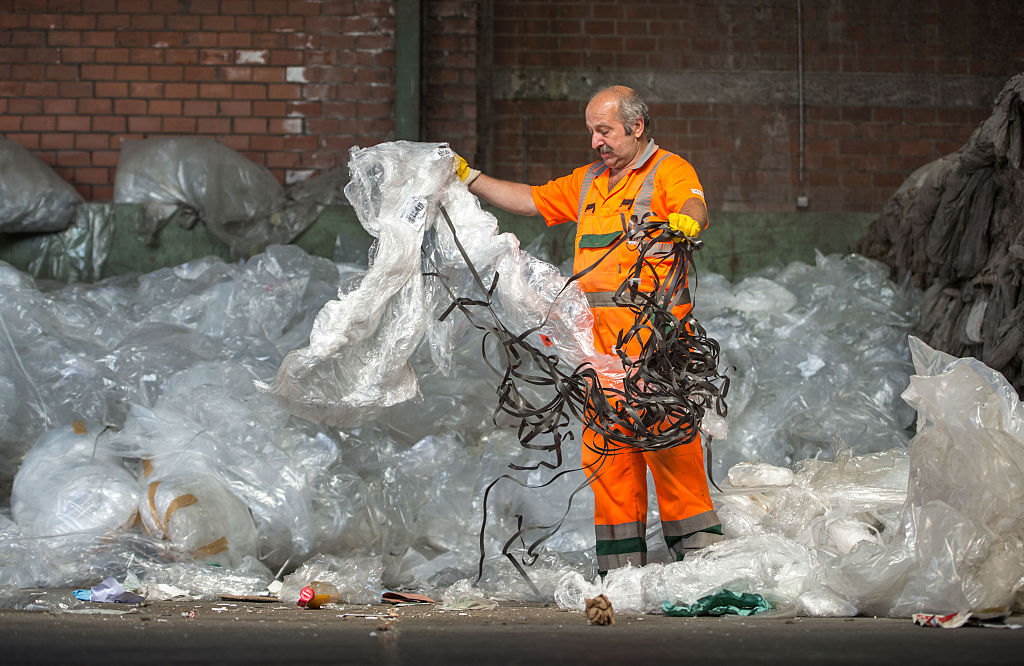 Jillian York thought she knew how to recycle.

After all, she had spent a childhood diligently recycling in New Hampshire, and was living in San Francisco. But when she moved to Berlin in 2013, she faced an urgent question.

Where do the glass bottles go?

The paper and plastic was simple enough: collect and sort into a series of color-coded bins ubiquitous in German neighborhoods. But there was no bin for the bottles.

“They were just piling up in my house,” says York, who works as a free speech activist. “German friends came over and they said, ‘you have a situation.’”

The fix: lug the bottles to a nearby grocery store to exchange for a small rebate, or leave them for someone else to pick up and pocket the cash. (Either way there’s money at stake—a key to Germany’s world-renowned recycling program.)

From there, York bought her own indoor, multi-colored sorting bin, learned how to properly disassemble packaging, and started carting home plastic bottles when there was nowhere obvious to recycle them on the street. Her assimilation was complete.

Germans, as you might have guessed, take recycling extremely seriously.

Ironically, York’s glass bottles are the least of Germany’s worries—they’re among the easiest items to recycle or reuse. The plastic packaging they often come in, however, is another matter.

Modern recycling as we know it really took off with the environmental movement of the 1970s. By the 1990s, Germany was putting into place its main packaging law. Fast forward to present day, and Germany recycles nearly 68% of its household waste, according to 2017 figures from Eurostat, Europe’s statistical agency. That compares to recycling rates of 44% for the U.K., and 26% for the U.S.

Some experts attribute Germany’s success to the deposit scheme for glass bottles, others to the ubiquity of the sorting system. There are mandatory quota systems for how much product must be recycled, and packaging producers pay into a scheme, called the “Green Dot System,” that covers collection and sorting.

Others attribute the success simply to, well, the Germans.

“For me, it’s in the blood,” says Christina Dornack, an expert in waste management and circular economy at the Technische Universität Dresden. “The Germans are ready to follow the rules,” she says.

But even they struggle with the achilles heel of waste—the material that the single-use plastic ban is designed to eliminate.

Germany collects virtually all of its plastic packaging for the purpose of recycling. But the actual recycling rates for that same packaging is just over 48%.

“That is the challenge,” says Dornack.

The trouble is, there are several types of plastic waste that are difficult to recycle. They usually end up alongside run-of-the-mill trash in landfills, despite well-meaning recycling efforts, according to the U.K.-based Ellen MacArthur Foundation’s New Plastics Economy initiative.

The first is tiny pieces of plastic that can easily fall through the cracks (think: your soy sauce packet). Then there’s plastic that simply has too much food on it (think: your fast food container). Next is packaging made of materials that would have to be separated before they can be recycled (think: that crinkly chip bag). Finally, there are products made from “uncommon” plastics—it’s not that they can’t be recycled, it’s just that there is not enough of it to make it economical. Plus, they contaminate all the other plastic (think: that blister pack of pills).

That means once a municipality sets up a program that can correctly sort and collect waste, recycling plastic runs into two problems: design, and economics. (One previous solution—send all that waste to China—is no longer an option.)

A lot of packaging is “just designed in a way that it cannot be recycled,” says Rob Opsomer, who leads the New Plastics Economy. That could be partly solved by companies investing in designing plastic that is easy to recycle: simpler and more streamlined, with less layering of different materials.

The economic problem, meanwhile, is two-fold: the recycling system itself must be paid for (in the U.S., many municipalities simply can’t afford it); and then—a conundrum that Germany’s facing—localities may produce more recycled material than companies want to buy. Manufacturers are often turned off by recycled plastic because they perceive it to be of lower quality, Dornack says. They’d rather use “virgin” plastic, which is cheap, clean, and durable.

Germany is trying to address all of this. Its solution? More rules, naturally.

A new packaging law that went into effect on January 1 increases recycling goals, and pushes to reduce waste. By 2022, the recycling target for plastic overall will rise to 90%, up from the current target of 60%. The new legislation urges companies to use more recyclable material in their products and design better packaging.

Still, the average German recycler would be gutted to realize so much of their collecting and sorting regimen has been in vain, York says.

“Don’t let that get out,” she says. “People are going to be so upset.”