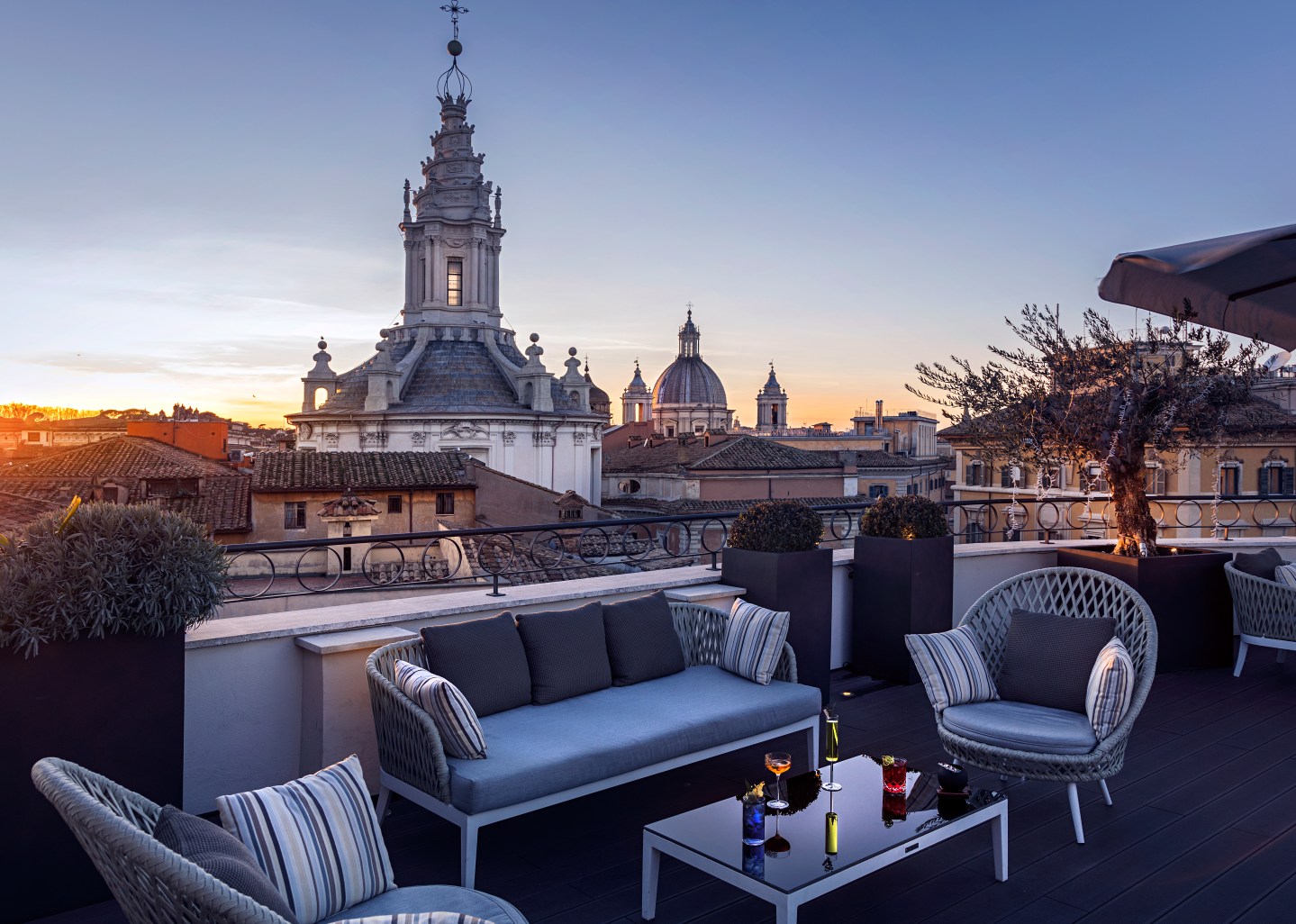 While Milan might be known as Italy’s fashion and design capital, throughout the last decade, Rome has started punching well above its weight, embracing a unique marriage of old and new.

The open-air museum that is the Italian capital is synonymous with chaos, winding cobblestone streets, and reminders of history at every turn. The Eternal City sits in harmony with relics of the past and has seen its fair share of emperors, popes, triumphs and tragedies. But one trend might go down in this city’s history as one for the ages—and it looks like it’s here to stay.

Touches of minimalist design are popping up everywhere. But don’t let the term “minimalist” fool you into thinking this is an imported Scandinavian or Northern European influence. From cafes to bars, restaurants to hotels, Rome is abuzz with a sexy contemporary design that locals and international visitors are demanding. With a varying mix of neutral palettes, pops of pastels and a smattering of bold primary colors, classic style is out. Simple clean lines, unadorned interiors, geometric shapes, and textures are in.

Newer restaurants and bars on the Roman landscape are a far cry from the expected red-checkered tablecloth trattorias. While those remain a staple of the dining scene, a new breed of establishments are embracing creative lighting, bronze fixtures, open kitchens, and bare tablescapes.

Newer kids on the block include Zia in Trastevere with its dim mood lighting and round, Scandi-inspired wooden tables that serve as a canvas for owner and chef Antonio Ziantoni’s dishes. Bars like Daforma Gallery and Drink Kong have set new standards: The former with an eclectic art space while embracing brunch and cocktail hour; and the latter with neon lights, a private Japanese dining space, and craft cocktails.

In the hotel industry, One property redefining opulent design is Corso 281 Luxury Suites. Occupying four floors of an 18th century baroque noble palazzo on Rome’s main thoroughfare Via del Corso, award-winning Milanese architect Chiara Caberlon brought this showstopper to life under the direction of owner Natalino Gisonna. That starpower meant the ultimate in Italian design: Carrara marble, hardwood flooring, plush fabrics, and innovative technology. With Rome as her muse and inspiration, contemporary black and white interiors brush up against carefully selected artworks, adorning the walls creating a rotating in-house art gallery. Service begins even before arrival, when you select the champagne for the minibar or which Frette linens you’d prefer.

“I wanted to create a modern space with luxurious details at every touch point that acts as an ode to the nobility of Ancient Rome,” says Gisonna. “We have managed to meld the old with the new—from preservation of our 1750 building facade to the majestic original marble staircase to the wrought iron railing.”

Caberlon, founder of her eponymous architecture firm CaberlonCaroppi Studio, describes their contemporary projects as each telling a different story.

“When you’re talking about design, you must take into account a city’s personality,” explains Caberlon. “Rome isn’t just any city: here, the past, present and future co-exist. You cannot simply take all that is Rome out of the equation.”

But not everyone has abandoned classical Roman style. At the Marriott Pantheon Iconic Hotel, Milanese designer Marco Piva looked to blend ancient and modern, looking to the dome, oculus, and columns of the Pantheon for inspiration in geometric features within the hotel hallways from gleaming archways to circular motifs and mirrors. His lustrous lines extend to the Divinity Bar, a sixth-floor patio ideal for apertivo hour at sunset, with the unobstructed views of the influential edifice.

Hotel manager Giorgia Tozzi says the look is inspired by a new brand of classic: “It’s modern and retro-chic where Roman aristocracy no longer lives, but you can feel it. It is luxury that is elegant, practical, colorful, dynamic, and understated.”