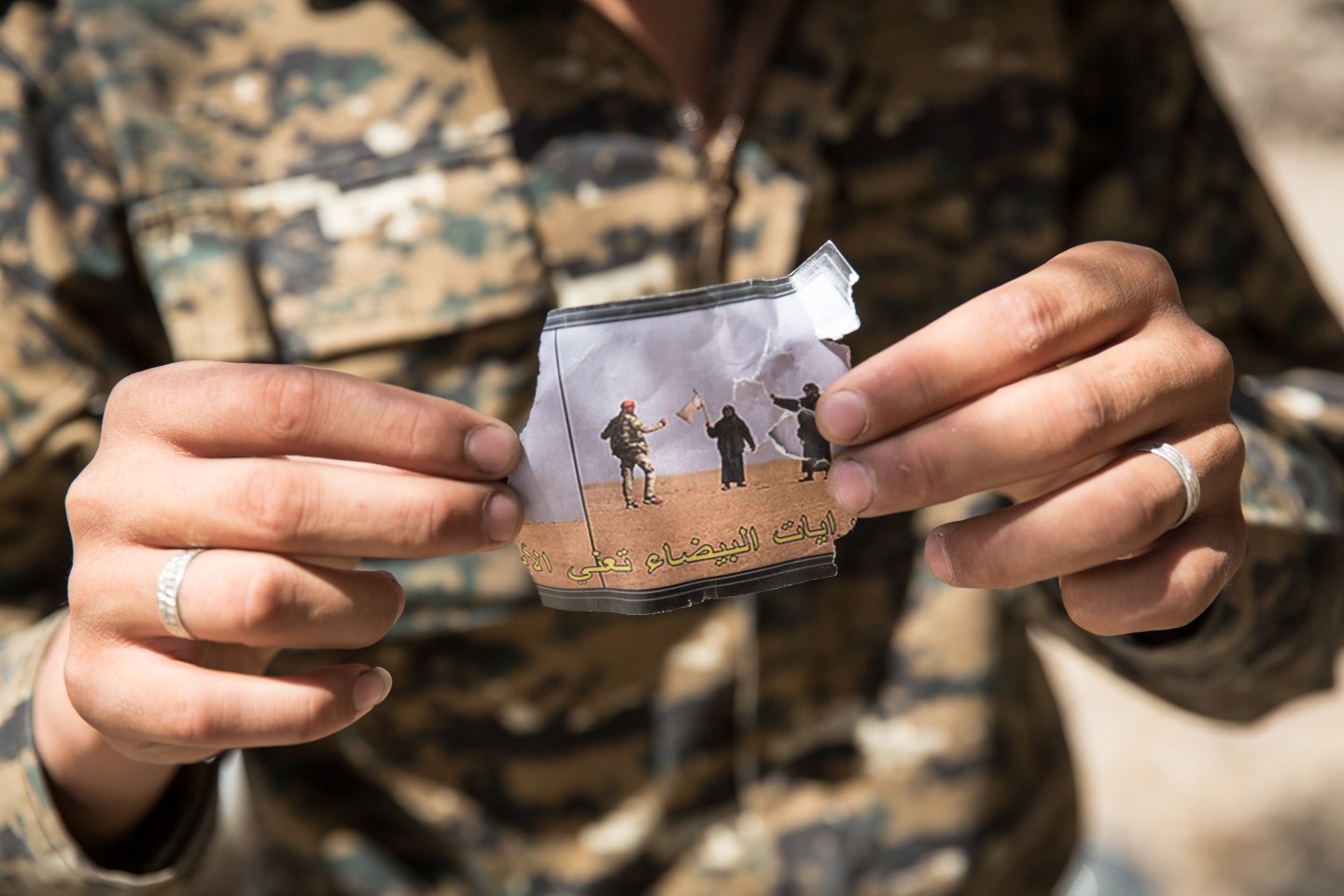 RAQQA, SYRIA - JULY 05: On the road to the well, the Arab fighters discover a paper torn apart by Daesh propaganda on July 05, 2017 in Raqqa, Syria. Liwa Al-Tharir, a brigade of Arab fighters who decided to fight with the fanatics of the EI has taken over the houses of Daesh. PHOTOGRAPH BY Chris Huby / Le Pictorium / Barcroft Images London-T:+44 207 033 1031 E:hello@barcroftmedia.com - New York-T:+1 212 796 2458 E:hello@barcroftusa.com - New Delhi-T:+91 11 4053 2429 E:hello@barcroftindia.com www.barcroftimages.com (Photo credit should read Chris Huby/LePictorium/Barcroft / Barcroft Media via Getty Images)
Chris Huby of LePictorium—Barcroft Media via Getty Images

What causes a person to become radicalized?

This was the subject of a fascinating talk delivered by Tamar Mitts, an assistant professor of international and public affairs at Columbia University, at a “data science day” hosted by the school on Wednesday. Mitts studied the efficacy of Twitter-disseminated propaganda supporting the self-identified Islamic State, or ISIS, in 2015 and 2016. To avoid the “obvious ethical issues” which attend to subjecting human analysts to ISIS propaganda, Mitts said she used machine learning algorithms to identify and sort messages and videos into various categories, such as whether they contained violence. Then she parsed her dataset to uncover trends.

Mitts’ results were a revelation. Even though people tend to associate ISIS propaganda with heinous acts of brutality—beheadings, murder, and the like—Mitts found that such violence was, more often than not, counterproductive to the group’s aims. “The most interesting and unexpected result was that when these messages were being coupled with extreme, violent imagery, these videos became ineffective,” Mitts said. In other words, the savagery for which ISIS became famous did not appeal to the majority of its followers; positive messaging found greater success.

There’s a caveat though: Anyone who was already extremely supportive of ISIS became even more fanatical after encountering a piece of propaganda featuring violence. So, while violent acts turned off newcomers and casual sympathizers, they nudged ideologues further down the path of radicalization. Extremism begets polarity.

In the wake of the Christchurch massacre, Mitts’ research gains even more relevance. Tech giants are continuing to fail to curb a scourge of violence and hate speech proliferating on their sites. World governments are, meanwhile, passing ham-fisted policies to stem the spread of such bile.

Perhaps Mitts’ discoveries could help society to avoid repeating history’s darkest moments. My appreciation for her work grew after I finished reading In the Garden of Beasts, a gripping journalistic endeavor by Erik Larson, which details the rise of Nazi Germany through the eyes of an American ambassador and his family living in Berlin. Afterward, I watched a YouTube video—an innocuous one—recommended by the author: Symphony of a Great City, a 1927 film that documented the daily life of ordinary Berliners at that time. It amazes me to think how, within a few years, these souls would come under the sway of Hitler’s bloodthirsty regime.

While the Internet makes zealotry easier than ever to incite, today’s tools also make it easier to study.