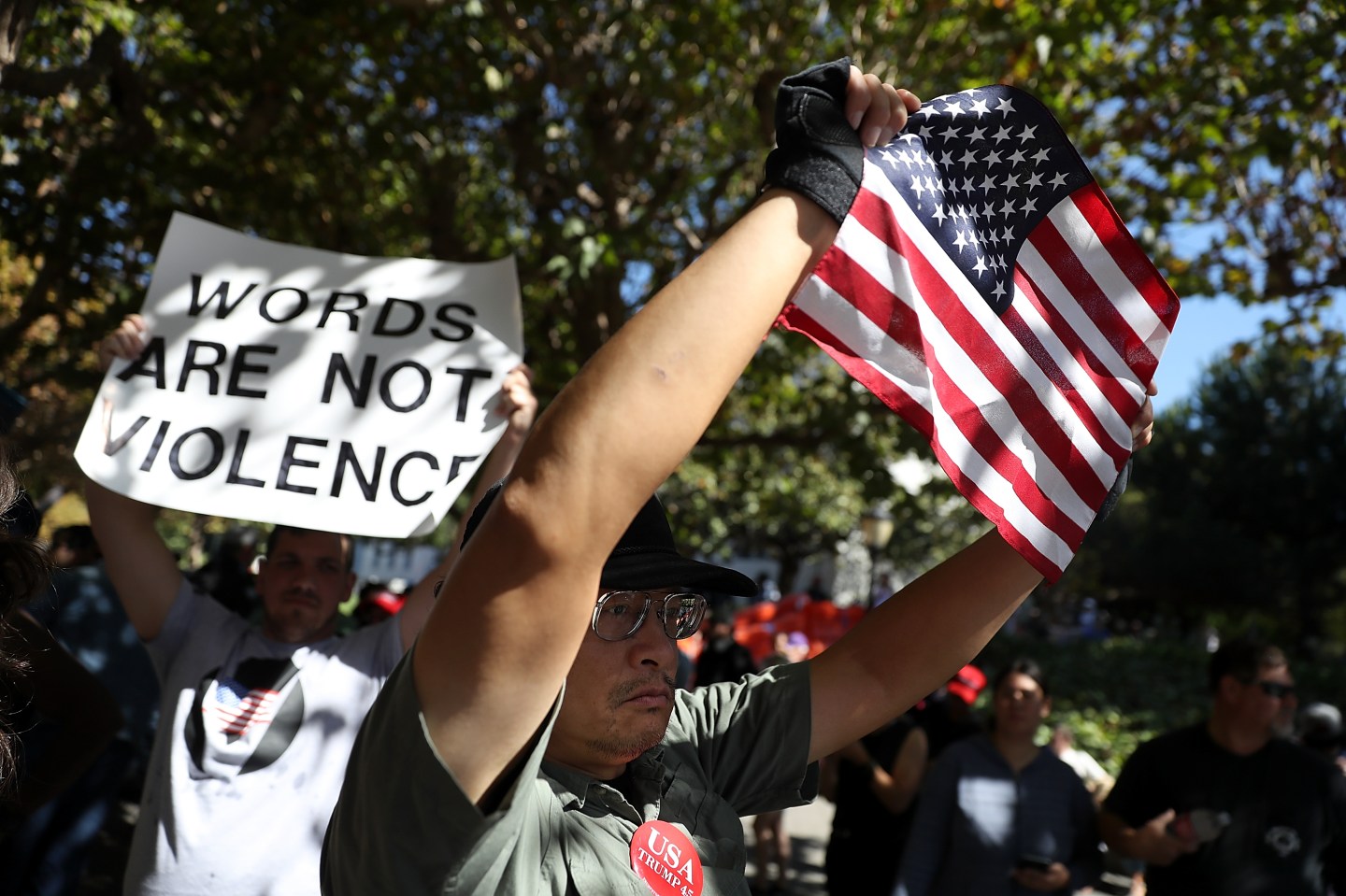 Protesters hold signs during a free speech rally with alt-right commentator Milo Yiannopoulos at U.C. Berkeley on September 24, 2017, in Berkeley, Calif. Hundreds of protesters came out to support and demonstrate against Yiannopoulos.
Justin Sullivan—Getty Images

In the wake of President Donald Trump’s executive order to protect free speech on college campuses, which allows federal research and education grants to be withheld from public higher education institutions if they do not promote free and open debate on campus, some fear universities will feel pressure to protect the rights of guest speakers at the expense of the students who protest them.

On Friday, a third University of Arizona (UA) student was charged with a misdemeanor and is now facing up to six months in jail, after protesting the presence of Customs and Border Protection (CBP) agents on campus.

The charges come one year after Arizona Gov. Doug Ducey signed into law a measure to protect free speech—for both student activists and speakers on college campuses—in response to riots over a scheduled appearance by alt-right speaker Milo Yiannopoulos, at the University of California, Berkeley. Yiannopoulos was expected to out undocumented students at the event.

Michelle Téllez, an assistant professor in the department of Mexican American Studies at UA said the charges against students are a “move toward silencing” progressive activists.

“They exercised their right to protest and that’s what’s being seen as a threat,” she told Fortune. “And now the students are being charged and it’s egregious.”

UA said the CBP agents were invited by some of its students. University of Arizona president Robert Robbins called the protesters’ actions “a dramatic departure from our expectations of respectful behavior and support for free speech” and university police charged three with “interference with the peaceful conduct of an educational institution.”

“Student protest is protected by our support for free speech,” Robbins said in a statement. “But disruption is not.”

A video of the incident shows a student protester standing outside the event and later walking behind Border Patrol agents, calling them “murderers” and arguing that the college is “supposed to be a safe space for students.”

Videos of the protests were shared online after some media outlets called them an example of free speech being impeded by liberals and leftists. But the free speech argument has been used as a talking point in recent years to protect white nationalist organizing and speakers on college campuses.

Public universities, like UA, are already required to uphold the First Amendment. But in some cases, the ideals behind free speech might not apply in the same way—especially when students feel threatened.

UA’s Immigrant Student Resource Center and the Mexican American Studies (MAS) department said they had to close earlier this week after professors in the department were targeted online by far-right hate groups.

“This is not new, as threats of violence towards students who protested Border Patrol on campus continue to be (sic) grow,” the Center wrote in a Facebook post.

Téllez explained that the student protest against the agents, who were fully uniformed and armed, should not be disconnected from the context of Arizona’s anti-immigrant policies, and what she described as Border Patrol’s “culture of cruelty.”

According to the Southern Border Communities Coalition, an organization formed in 2011 that promotes policies that seek to improve the quality of life for people living along the Southern border, 83 people have died in the custody of, or in encounters with, U.S. border agents in the past nine years, with causes of death ranging from illnesses to fatal shootings.

“Even here in recent days there’s been families separated and residents in Tucson being detained by border patrol, so we can’t dehistoricize and depoliticize what’s happening here in Tucson and Arizona more broadly,” said Téllez.

But the disruption on the University of Arizona’s campus also exists in the context of ongoing controversy around free speech on college campuses, especially in recent years.

Ben Cooper, a junior at Arizona State University (ASU) and the communications director of the Young Democratic Socialists of America at the school told Fortune he’s “always been concerned the [college] administration and police” will take action against students holding protests. According to Cooper, since as recently as 2016, ASU created what he called “free speech zones” on campus where students are allowed to protest.

Students at ASU organized a march on Thursday in a public area open to student action to protest Border Patrol agents who were invited to recruit there at a career fair. Some held signs that read, “Solidarity with U of A.” Protesters were not allowed into the building where the event was held, but, Cooper said, “Someone poured water on us from a building and the police didn’t do anything.”

Trump first proposed his executive order on free speech in a two-hour speech at the Conservative Political Action Conference on March 2. During this speech, Trump highlighted cases of conservative students being targeted on college campuses, including a member of Turning Point USA, a far-right organization with connections to white nationalists. Trump officially signed the order at a White House ceremony on March 21, two days after the incident at UA.

“If a college or university does not allow you to speak,” Trump said during the signing, “we will not give them money.”

DACA [Deferred Action for Childhood Arrivals] recipients at the University of Arizona wrote an open letter of support for the student activists who disrupted the CBP event, saying the presence of agents poses both a physical and emotional safety concern to undocumented students and local undocumented residents.

“The discomfort and fear we face at the sight of Customs and Border [Protection] is overwhelming,” they wrote. “As DACA recipients at the university, the presence of CBP on campus has a traumatic impact on our overall well being and impedes us from fully engaging in academics.”

UA said that college Republicans did hold a second event with a Border Patrol agent that was protested by about 50 students.

“There was no disruption, both groups had the event they planned and both groups departed without incident,” a UA spokesperson told Fortune. “This is much more typical of how we hold events on campus involving potentially controversial speakers and topics.”

But Téllez said the first incident could have had the same result, without the student activists facing charges.