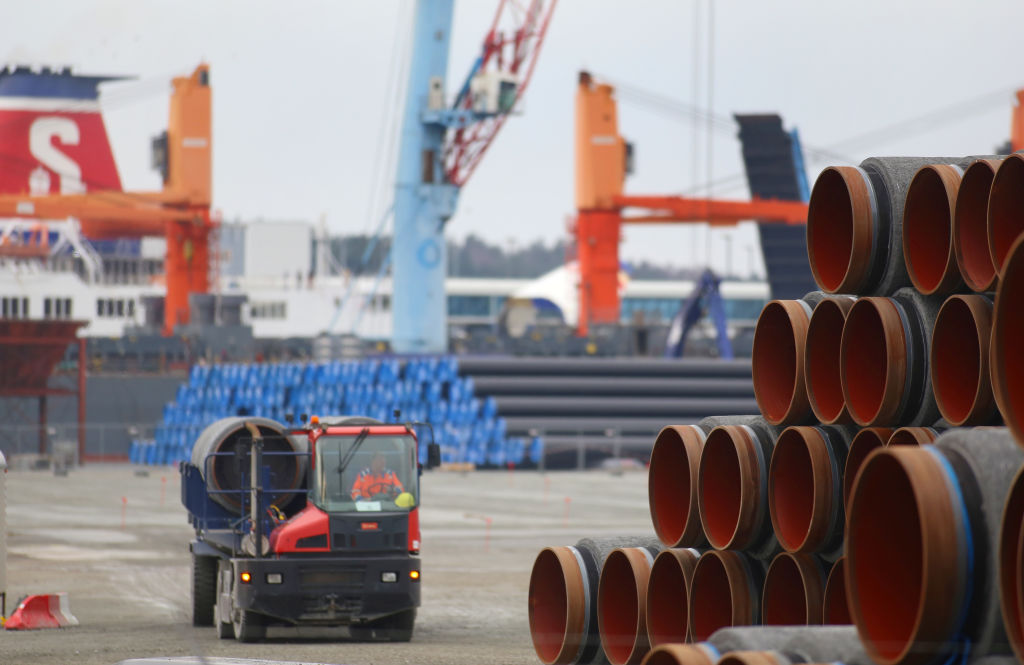 08 February 2019, Mecklenburg-Western Pomerania, Mukran: Pipes for the Nord Stream 2 natural gas pipeline are ready for collection at the port. The construction of the Russian-German Nord Stream 2 natural gas pipeline is one of the most controversial energy projects in Europe. Photo: Danny Gohlke/dpa (Photo by Danny Gohlke/picture alliance via Getty Images)
picture alliance via Getty Images

The Trump administration is readying a tough stance against a Russian gas pipeline with sanctions, according to the Wall Street Journal. The move is driving tensions between the U.S., Germany, and other parts of the EU. The reason is a combination of geopolitics and competition in selling natural gas.

At the center of the current controversy is the Nord Stream 2 pipeline, a joint project between Germany and Russia, according to Deutsche Welle. The 746-mile pipeline from wells near St. Petersburg to Greifswald in northeastern Germany would run under the Baltic Sea. Germany could double the amount of natural gas it imports from Russia, which already supplies 40% of the country’s gas consumption.

The geopolitics are complicated. The EU wants to move away from Russia as a supplier of energy and the EU Commission explicitly has refused to back Nord Stream 2. The underwater route also bypasses central and eastern European countries that are accustomed to collecting gas transit fees. Ukraine is concerned because it, too, makes $2 billion a year on gas transit fees, a key source of income.

Then there’s the U.S., which views purchases from Russia as support for the country while 2014 sanctions over the invasion of Ukraine are still technically in force. After a meeting with German Chancellor Angela Merkel in July 2018, Donald Trump tweeted, “What good is NATO if Germany is paying Russia billions of dollars for gas and energy?” and “The U.S. is paying for Europe’s protection, then loses billions on Trade.”

Finally, there is money. The three largest natural gas producers in the world are the U.S., Russian, and Iran, according to the CIA World Factbook. Iran is hampered because of U.S. sanctions. By cutting off Iran on one hand and reducing Russian sales on the other, the U.S. could see more market activity and become a larger exporter.