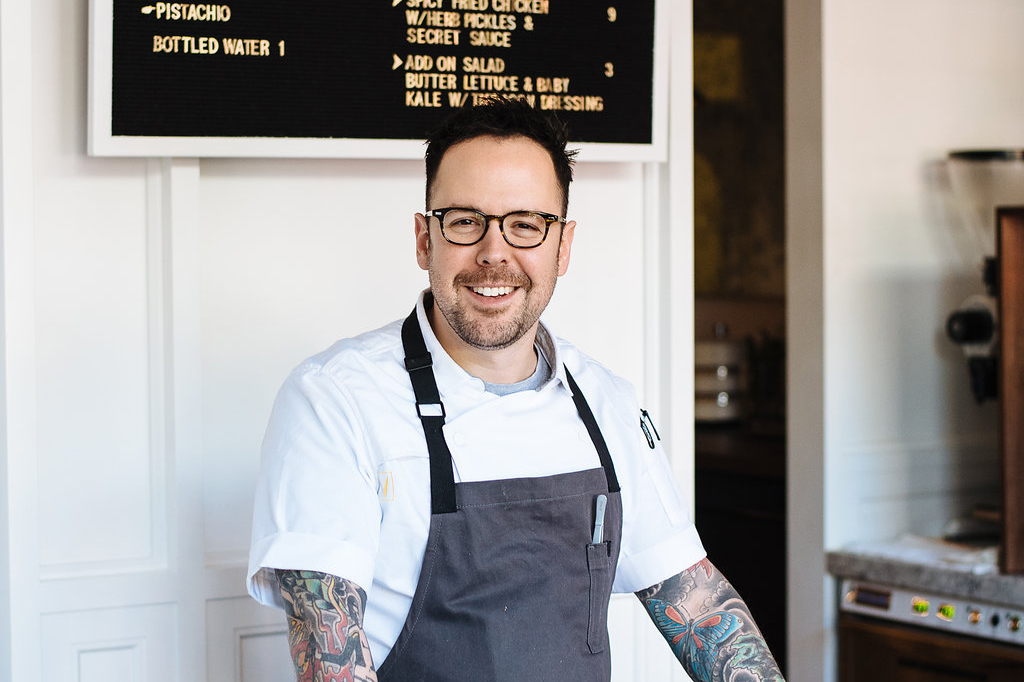 At first glance, the Little Pearl burger doesn’t look so different from the ones served to Clemson football team. Squished, shiny bun. Double patties, pressed thin and seared hard. Familiar toppings: pickles, lettuce, onions, and special sauce in the very meta form of Russian dressing. But the beef, a blend of ground brisket and strip, has a persistent umami cultured during dry aging, the pickles and dressing are house-made, and the onions are caramelized in beef fat. In a move that out-MAGAs the president, Little Pearl’s chef-owner Aaron Silverman serves the burger with wet wipes packaged in American flag-print envelopes.

This burger is the keystone of Little Pearl’s clever, unusual, and fleet-footed tasting menu. Here at Silverman’s third restaurant, the meal runs about eight courses and two hours, not an uncommon way to dine in D.C. The cost is $45 ($75 with pairings), an extremely uncommon way to dine in D.C. When Little Pearl opened about a year ago, the tasting was nicknamed the Godfather Menu because, Silverman says, “it was an offer you couldn’t refuse.”

You really can’t. Consider other paired tastings around the District: Masseria ($258), Minibar ($415), even Silverman’s own Pineapple & Pearls ($325 inclusive of tax and gratuity). Little Pearl is different from these restaurants, of course—far more casual, even roguish. In spirit it’s like Little Serow, the acclaimed Thai restaurant off Embassy Row. There, chef-owner Johnny Monis serves a vivacious, family-style pre-fixe for less than $60, while next door at his upscale Mediterranean restaurant, Komi, the paired tasting fetches $250. This two-pronged model, which Silverman follows with Pineapple & Pearls and Little Pearl, accounts for the budgets of congresspeople and of their interns.

Little Pearl’s low barrier to entry lets Silverman and his executive chef BJ Lieberman take creative risks. Sometimes execution kowtows to a cute idea, as in the eggplant parm toasts over-sweetened with honey and fermented tomato jam that hasn’t been fermented long enough. More often the aims are well aligned. The tasting begins with the Angel Egg, a deviled egg illusion in which the typical hard-boiled base is swapped out for an airy, sweet-and-tangy meringue seasoned with malt vinegar powder.

Beverage director Kerstin Mikalbrown pours a lean, lemony Albariño for the egg and the following course. If you like trying different wines but have trouble draining an entire pairing without feeling like you need a defibrillator to wake up the next morning, Mikalbrown’s every-other format is a blessing, and the gracious, intuitive staff is well-trained and confident in talking about the producers and styles. That’s not surprising, as great hospitality is synonymous with Silverman productions. His first restaurant, Rose’s Luxury is as well known for its customer-first approach to service as its dynamite pork salad with coconut and litchi. “Rose’s isn’t just in the restaurant business,” Bon Appetit’s former restaurant editor Andrew Knowlton wrote in a 2014 story declaring Rose’s the 2014 restaurant of the year. “It’s in the making-people-happy business.”

Caught off-guard by the instant success and hours-long lines out the door, Silverman couldn’t accommodate his other ideas for Rose’s, like coffee and pastries in the morning and a high-end tasting at night. Those scuttled ambitions found a home when he opened Pineapple & Pearls in 2016. Little Pearl first germinated here in the form of a three-seat café, which was soon “bursting at the seams,” Silverman says. “We wanted to do more.”

In December 2017, Little Pearl relocated three blocks away, to the old carriage house on the grounds of a former naval hospital commissioned by Abraham Lincoln in 1864. It’s a strange puzzle of a space, especially if you’re seated at the sparse, industrial looking bar and coffee counter. (Little Pearl’s was the first tasting menu I’ve eaten while facing a swiveling iPad checkout terminal.) The area is narrow and dark—are these utensils…rose gold?—with a seamless door hidden in one wall and a bright red emergency STOP button protruding from another. You wonder if you’re supposed to eat or escape the room.

The Most Important Meal of the Day

Daylight brings a different view, with the snow-dusted lawns and wrought-iron gates giving the property the appearance of a Relais & Chateaux inn. Sun streams in through the front windows and rear conservatory. The utensils are rose gold.

Morning guests find lots of beverages (coffee from the excellent roaster Passenger Coffee in Lancaster, Pa., lattes in iced banana and coconut nutmeg, mezcal-laced hot chocolate) and a few things to eat. There’s a yogurt parfait, black-olive financier, and a gooey “medium-rare” chocolate-chip cookie. The same cookie appears as one of two desserts at the nighttime tasting, following a hollowed Satsuma tangerine hiding smooth chocolate gelato and refreshing orange granita. The café’s take on a breakfast sandwich is a miniature pull-apart loaf of Japanese milk bread stuffed with a greasy paste of pork sausage, cheddar and Chihuahua cheese that, my breakfast date rightly observes, looks like cat food.

The move instead is the superlative sweet potato donut fried in clarified butter. Little Pearl keeps one fryer filled with ghee for the velvety donuts, as well as for the pommes paillasson at dinner. These crispy, cubic potato tots come topped with chives and brown butter-and-spicy cod roe hollandaise, creating a bite that’s crunchy, fatty, and garlicky and smolders on your tongue. The chicken wings lacquered in an electric chili-and-pineapple glaze aren’t afraid to bring the heat, either. You’ll seek refuge in Field Recordings Skins, a racy orange Chenin Blanc blend from the Central Coast, and leave sticky fingerprints all over the glass.

The best thing to eat at Little Pearl, even better than the burger, is a more meditative experience. It’s a cheese course…and an intermezzo course: La Tur and white peach sorbet. The cheese is creamy, fudgy, and slightly funky. The sorbet, so smooth and floral, rips you back in time to the ripest, perfumiest piece of stone fruit you ate last August. Together the elements are a master class in contrast and balance, and a perfect expression of Little Pearl’s creative energy.

When the check comes, it’s almost jarring to pay less than $100 including tip. You feel like the “Start the car!” woman in the IKEA commercial. Silverman says the relative bargain price point isn’t a business strategy but instead evolved based on what Little Pearl’s customers wanted. “People respond to not having to make decisions,” he says.

We make about 220 decisions a day just about what to eat, according to researchers at Cornell. Who hasn’t been out to dinner, staring at a menu, paralyzed by the paradox of choice? Eliminating that from the experience can be liberating. But for the experiment to work, the restaurant needs to gain a diner’s trust. Little Pearl, in the immortal words of the Weeknd, you earned it.