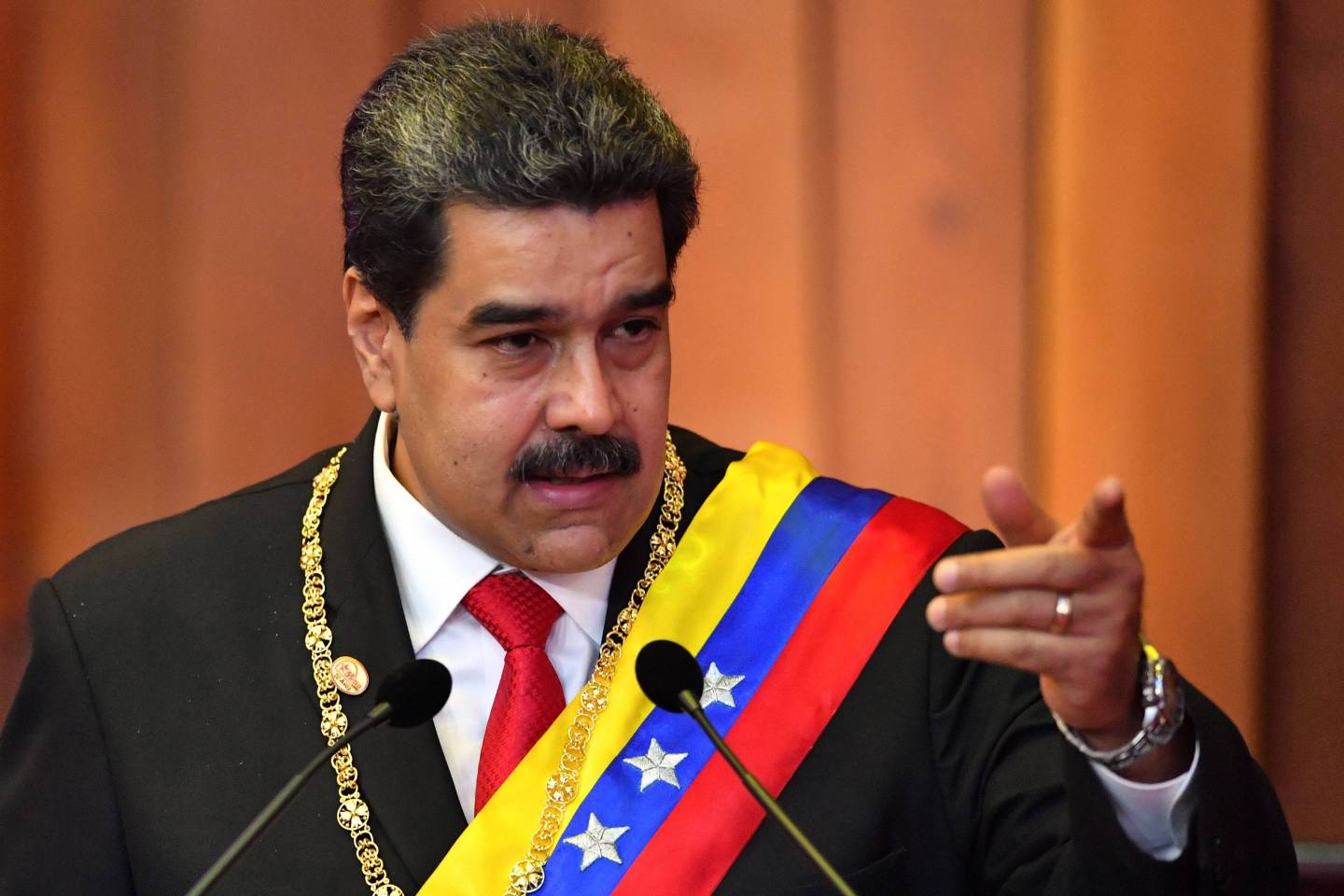 Venezuela's President Nicolas Maduro delivers a speech after being sworn-in for his second mandate, at the Supreme Court of Justice (TSJ) in Caracas on January 10, 2019. - Maduro begins a new term that critics dismiss as illegitimate, with the economy in free fall and the country more isolated than ever. (Photo by Yuri CORTEZ / AFP) (Photo credit should read YURI CORTEZ/AFP/Getty Images)
Yuri Cortez—AFP/Getty Images

Venezuela abandoned its decision to sever diplomatic ties with the U.S., stating that each country agreed to keep a so-called interest section open in their respective capitals.

The Saturday evening announcement that the missions would remain open was a retreat after days of bellicose rhetoric prompted by the U.S. decision to recognize National Assembly leader Juan Guaido as the nation’s rightful head of state. President Nicolas Maduro’s election to a six-year term last year has been widely criticized as a fraud designed to keep him and his military allies in power despite the country’s years-long spiral into misery and hunger.

This weekend, Guaido’s supporters maintained a united front from New York and Brussels to the streets of Caracas, and the country’s military attache in Washington declared allegiance to the newcomer. The European Union demanded speedy elections and U.S. Secretary of State Michael Pompeo told the UN that the socialist Maduro must go.

“It is time for every other nation to pick a side. No more delays, no more games. Either you stand with the forces of freedom, or you’re in league with Maduro and his mayhem,” Pompeo told the UN Security Council on Saturday during an emergency session called by the U.S.

Maduro called Pompeo “a warlord” who speaks with “a lot of despair and hate” in an interview with CNN-Turk on Saturday after the U.S. secretary spoke.

Yet Maduro sought to deflate tensions, for now at least, by backing off his earlier order to expel all diplomats.

“I still believe in dialogue,” he told CNN-Turk. He said he also wanted his own diplomats “to defend Venezuelan interests in the U.S.” comparing the arrangement to that of the U.S. and Cuba, which had no diplomatic relations but maintained ties through lower-level officials in each country.

The small number of U.S. diplomats in Venezuela, he said, “will remain and comfortably continue their lives with the protection we will provide for them.”

Pompeo and President Donald Trump have been intransigent in the face of Maduro’s fury. Despite the regime’s threats to throw out diplomats and cut off electricity, the U.S. had refused to close its embassy.

However, nonessential staff were leaving the country, Foreign Minister Jorge Arreaza said in a statement, calling it “an effective retreat.” Venezuelan diplomats in Washington were already returning to Caracas on Saturday, he said.

Now, the governments have 30 days to reach an agreement that will establish interest sections, which permit basic consular functions, but are the lowest level of diplomatic exchange. Remaining personnel will stay in their respective embassies, protected by “diplomatic prerogatives” during that time, according to Arreaza’s statement.

There was no immediate response from the U.S.

Venezuela’s competing leaders — Guaido is a 35-year-old engineer-turned-lawmaker while Maduro succeeded the late President Hugo Chavez in 2013 — are vying for support in the streets, the military and the mainstay oil industry.

The nation’s diplomatic outposts are more leverage Guaido would like to seize. At a Saturday morning rally in Caracas, he said that many diplomats were heeding his calls to stay in place in defiance of Maduro. “Remember all those consulates that were going to close?” Guaido asked the crowd. “I’ve got good news for you: They’re going to stay open for a long while!”

“The armed forces have a key role in restoring democracy in the country,” Silva said, calling on the government to “stop the usurpation of executive power.”

Carlos Luna, a professor of international relations at the Central University of Venezuela in Caracas, said Maduro’s decision to allow interest sections represents a “loss in power.”

“He made a threat and didn’t complete it,” Luna said. “He’s doing this to ease tensions with the U.S. When he made the decision to break relations he did so because he felt obligated, but forcing diplomats out by force carries consequences, especially if you’re staring down the world’s greatest military power.”

Guaido’s success in keeping a unified opposition to Maduro at home and abroad — and Maduro’s reluctance so far to arrest Guaido — raise the prospect of a grinding standoff.

The U.S. is betting it has the clout to tip the scales after Trump’s decision to recognize Guaido was joined by countries including Argentina, Brazil, Colombia and Panama. EU powers shifted toward the U.S. position Saturday with envoys of the U.K. and Germany saying the European Union would recognize Guaido as interim president unless a new election is called within eight days.

Arreaza called the push for a new election “almost childlike.”

Maduro has stood firm in the face of demonstrations against his rule this week, winning the endorsement of key military leaders and vowing to defeat what he calls a U.S.-backed coup against his government.

The UN hearing was mostly a symbolic clash. With Venezuelan allies China and Russia holding veto power, there was little chance the UN body would agree to take action. Among the countries rejecting the U.S. request for an emergency meeting was South Africa.

Russia has helped Maduro’s government with loans and weapons exports. China has provided more than $62 billion, mostly in loans, to Venezuela since 2007 and it’s paid back in crude.

Moises Rendon, associate director of the Americas Program at Washington’s Center for Strategic and International Studies, said Saturday that Maduro’s opponents should ready themselves for a long struggle.

“The path to restoring Venezuela’s democracy and stability will undoubtedly be long and arduous,” he said.