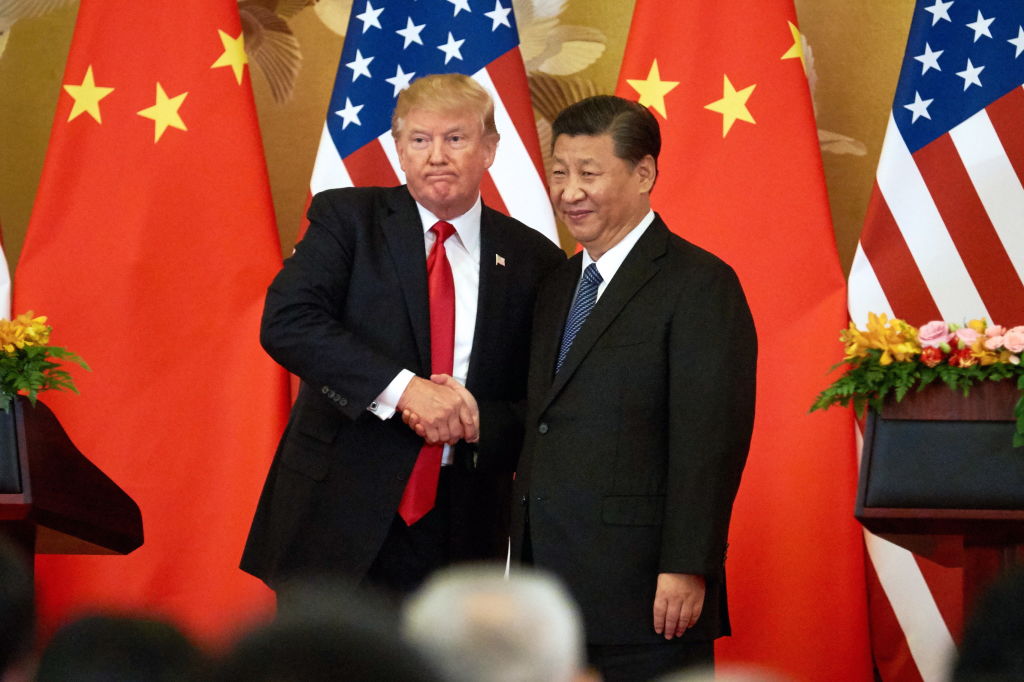 Donald Trump and Xi Jinping shake hands at the Great Hall of the People in Beijing on November 2017.
Artyom Ivanov

A U.S. government delegation will travel to Beijing in the week of Jan. 7 to hold trade talks with Chinese officials, two people familiar with the matter said.

Deputy U.S. Trade Representative Jeffrey Gerrish will lead the Trump administration’s team, which will also include Treasury Under Secretary for International Affairs David Malpass, according to the people, who spoke on the condition of anonymity. Neither the USTR nor Treasury responded to requests for comment.

Chinese Ministry of Commerce spokesman Gao Feng confirmed that the two sides planned to sit down for talks next month, although he didn’t provide a date for the meeting during his regular briefing in Beijing on Thursday.

Next month’s meeting will be the first face-to-face discussion the two sides have held since President Donald Trump and China’s Xi Jinping agreed on a 90-day truce in Argentina this month. Treasury Secretary Steven Mnuchin said last week the U.S. team and its counterparts have held discussions over the phone.

The meeting adds to signs that the world’s two largest economies are making progress in cooling trade tensions. Beijing this week announced a third round of tariff cuts, lowering import taxes on more than 700 goods from Jan. 1 as part of its efforts to open up the economy and lower costs for domestic consumers.

Chinese and U.S. officials have been in constant contact since the meeting in Argentina, but China isn’t exactly clear on the specifics of what the U.S. wants, according to two people in Beijing with knowledge of the talks. China wants the U.S. to remove the punitive tariffs that have been imposed and not add new ones, but suspects the U.S. will ask for more before it agrees to do that, the people said.

U.S. stocks extended gains on news of the talks. The S&P 500 Index rose 4.96 percent as of 4 p.m. in New York, after falling within two points of a bear market earlier in the session.

Trump has agreed to put on hold a scheduled increase in tariffs on some $200 billion in annual imports from China while the negotiations take place. He is pushing the Asian nation to reduce trade barriers and stop alleged theft of intellectual property. Beijing so far has pledged to resume buying American soybeans and to at least temporarily lower retaliatory tariffs on U.S. autos.

While it’s positive that USTR will be leading the delegation next month, the two sides are not on track to make the kind of large-scale breakthrough that the Trump administration is seeking, according to Derek Scissors, a China expert at the American Enterprise Institute.

“The failure of cabinet-level officials to even meet in the first half of the 90-day period makes it impossible to anticipate fundamental change on the Chinese side,” he said.

Trump said after returning from his South American meeting with Xi that U.S. Trade Representative Robert Lighthizer would be in charge of the China talks. Lighthizer, who isn’t scheduled to join the delegation in China, left no wiggle room for the two countries to extend talks beyond 90 days, saying this month that March 1 was a “hard deadline” that was endorsed by Trump.

“When I talk to the president of the United States he is not talking about going beyond March. He is talking about getting a deal if there is a deal to be done in the next 90 days,” Lighthizer told CBS on Dec. 9.

But Trump and other members of his trade team, including National Economic Council Director Larry Kudlow, have said they could further delay an escalation in tariffs if the two sides made sufficient progress.