U.S. Corporate Debt Lenders Are Joining the Israeli Bond Boom. Are They Getting In Too Late? 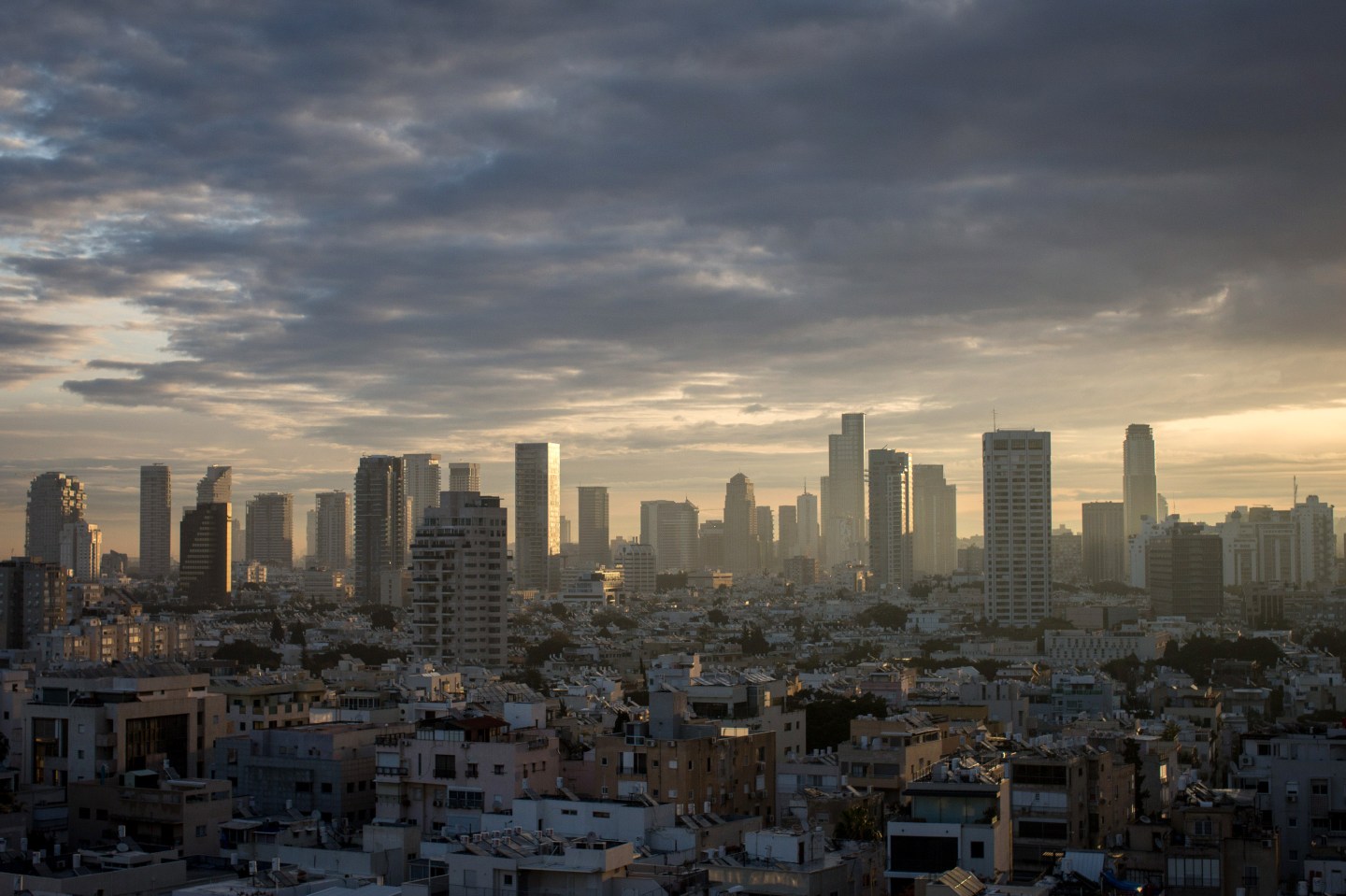 While in Israel on business last year, Greg Racz, the president and co-founder of private lending firm MGG Investment Group, had dinner with an old colleague from his time as a corporate lawyer. The topic of liquidity came up.

“I mentioned to him that guys like us lend money, but we also often borrow money from big banks that have decreased lending to our kind of borrowers,” recalled Racz, whose firm manages more than $1 billion in equity commitments from institutional investors and lends predominantly to small and midsized, family- and entrepreneur-owned businesses. “The banks get exposure indirectly to the middle-market lending world by lending to guys like us.”

But banks have grown increasingly selective in recent years in how they choose to allocate capital, prompting debt funds like MGG to look for alternative sources. So Racz’s friend asked if he was aware of Israel’s exchange-traded corporate bond market, which in recent years has become a wildly popular avenue for U.S.-based commercial real estate companies to raise debt at borrowing costs well below what they’d be able to secure domestically. More than 30 American firms have issued roughly $7 billion in bonds on the Tel Aviv Stock Exchange (TASE) over the past decade, including the likes of Stephen Ross’ Related Companies and World Trade Center developer Silverstein Properties. In its bond issuance last spring, Silverstein raised more than $170 million at a coupon of less than 3.4%—among the lowest rates secured by a U.S. firm in Israel to date.

Around the time Racz was in Israel, two New York-based business development corporations (BDCs), PennantPark Investment Corp. and Medley Capital Corp., were vying to become the first non-real estate entities from the U.S. to issue bonds on the TASE. Both firms—which, like MGG, lend money to private middle market companies—would eventually succeed, with PennantPark raising roughly $139 million in November 2017 and Medley sealing an offering valued at more than $121 million the following January.

“The more we learned [about the market], the more we were very interested,” Racz said. Buoyed by the BDCs’ trailblazing forays, MGG decided to kick off its own venture into the Israeli bond market—a lengthy, months-long process akin to an initial public offering in which the firm had to consult with myriad lawyers, accountants, underwriters, ratings agencies and regulatory authorities. It all culminated with MGG’s successful Israeli bond issuance last month, which saw it raise $65 million at a 6% coupon and become the first non-public, non-BDC company of its kind to tap Tel Aviv.

The arrival of American debt funds like MGG in the Israeli bond market was welcome news for Israeli institutional investors; the nation’s pension funds, insurance companies and asset managers are awash with liquidity due to the Israel’s mandatory pension laws, and eager for opportunities to invest that capital beyond the relatively limited options available to them in a country roughly the size of New Jersey. But it also represents a leap of faith of sorts for a market that is now dealing with the repercussions of its dalliance with U.S. real estate firms, most of which have seen their bonds nosedive in trading in recent weeks.

One company, Brooklyn-based condominium developer Brookland Capital, halted trading and delisted from the TASE in November after informing bondholders that it would be unable to meet upcoming payments, citing a slowdown in its development operations. Others, such as mall owner Starwood Retail Partners, a subsidiary of Barry Sternlicht’s Starwood Capital Group, have seen their bonds plummet well below par amid concerns over challenging market conditions (an underperforming retail sector, in Starwood’s case). Meanwhile, All Year Management, the Brooklyn real estate firm that has been among the most prolific U.S.-based issuers of debt in Israel, has faced issues related to financial disclosures that have spooked investors and prompted a major selloff across all four of the company’s TASE bond series. (Representatives for Brookland, Starwood, and All Year did not return requests for comment.)

The headwinds have proven endemic. The Tel Bond-Global Index, which tracks non-Israeli bonds trading on the TASE and is predominantly comprised of North American real estate companies, was down 12.4% for the year at the end of trading Thursday. (By comparison, the TASE bond market at large was down 1.6% for the year.) What’s more, the debt lenders who have recently entered the Israeli bond market have been far from immune to the downturn; PennantPark, Medley and MGG are all now trading below par, with MGG down more than 4% since the company’s bonds started trading on Nov. 21. (Representatives for PennantPark did not return a request for comment, while Medley declined to comment for this story.)

While that sort of selloff could be cause for concern for Israeli investors and prospective U.S. issuers alike, some market participants are opting to view it more as growing pains associated with a relatively young market—one comprised of entities located on opposite sides of the world from each other who are still trying to get a feel for what the other side expects.

“The Israeli investors are very sophisticated, but it was going to be a matter of time before they understood all of the nuances [of U.S.-based issuers],” said Jonathan Chassin of the Moinian Group, a Manhattan-based development firm that has raised more than $530 million on the TASE through two separate bond issuances to date.

Chassin, a former Morgan Stanley executive who now leads the developer’s real estate lending arm, Moinian Capital Partners, acknowledged the “volatility” facing the Israeli market for U.S. issuers but said the market is adjusting to the varying qualities of U.S.-based companies via “tiering in terms of the pricing on [different] bonds.” He also described the market’s embrace of debt players like PennantPark, Medley and MGG as “a natural progression” that “only makes sense” given the success with which U.S. real estate firms have been able to raise capital there and the appetite that Israeli investors have for exposure to the U.S. market.

Racz refuted the idea that buying bonds backed by corporate debt—rather than the cash flow from commercial real estate assets—is a riskier bet for Israeli investors. He pointed out that MGG operates on terms that “are very lender-friendly,” with low loan-to-value ratios and a senior secured, first lien position with “a lot of covenants.” The company’s bonds are backed by a portfolio of 31 loans valued at around $365 million, the company said in marketing materials provided to Israeli investors.

“The structure of the bonds is extremely favorable to the bondholders because they are paid ahead of the equity,” he said. Racz also cited MGG’s disciplined approach toward who it decides to lend to and the assets it chooses to lend against—noting that in recent years, the firm has been taking on only 1% to 1.5% of the business that it comes across (or only seven of the roughly 700 loan applications that it saw last year, according to Racz). “We prefer typically to lend to CEO/family/entrepreneur-owned businesses because we’re typically lending to their crown jewel and the main source of their wealth,” he noted. “As you can imagine, that makes [borrowers] conservative.”

Yossi Levi, a vice president at InFin, the Tel Aviv-based financial consultancy that advised MGG on its bond issuance, said that introducing Racz’s firm to the Israeli market required a “different kind of speech” to institutional investors and regulators. “Real estate, you can feel it and touch it, but all of a sudden it’s different because you’re investing in a company that does corporate debt,” he said. “Every time you’re opening up a new market, you need a very strong company to do it,” and MGG’s track record and business model qualified it as such, Levi added.

But other Tel Aviv bond market sources seem less convinced about the short-to-medium-term prospects of the market’s ongoing diversification—despite Hong Kong-based container shipping firm Seaspan Corporation signaling the latest possible evolution of the market in November, when it filed a prospectus for a debt issuance of its own. (Seaspan did not return a request for comment.)

Ori Eisenberg of financial advisory firm Barzell Global, who has advised multiple U.S. companies on TASE bond issuances, noted that as far as BDCs like PennantPark and Medley (which are publicly listed in the U.S.) are concerned, most Israeli investors can simply invest in them directly via U.S. securities and usually “for better yields.” Eisenberg added that while MGG’s status as a private debt lender offered a unique financial product for Israeli investors, no other BDCs have taken steps to issue bonds in Tel Aviv since Medley closed its offering last January.

Racz, for his part, isn’t discouraged. He described MGG’s bond offering as “the first step” in what he hopes will be a long and fruitful relationship with the Israeli market—one in which future series of bonds will be used to pay off those that came before them, thus continuing MGG’s status as a publicly traded entity in Tel Aviv.

“We look forward to issuing more bonds. For us, it’s just the very beginning,” he said. “We’ve got to look back in three, five, 10 years but I’d personally expect there will be a lot more folks who have a story like ours.”