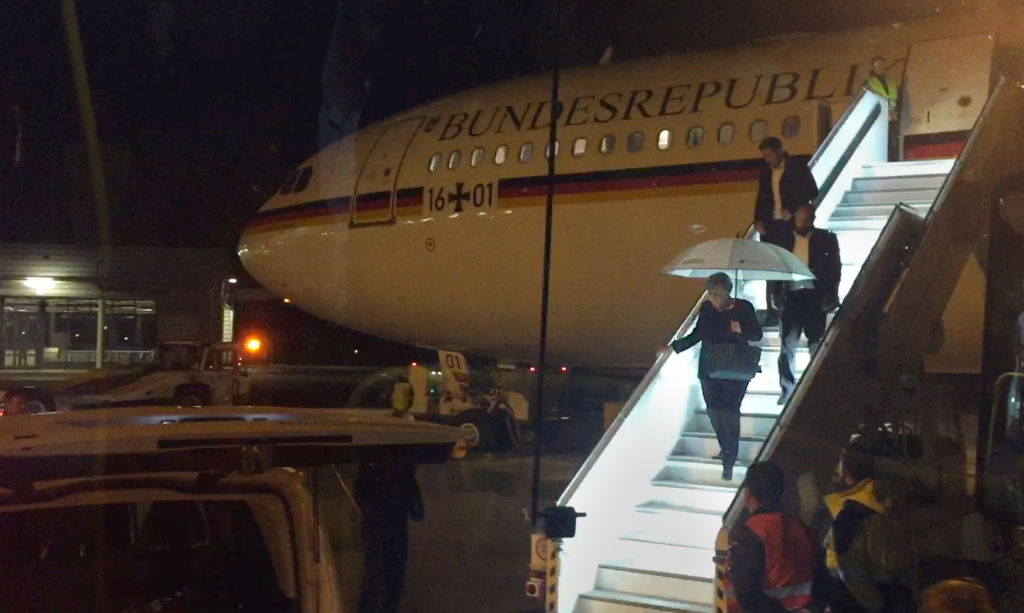 German authorities are investigating the reason for an electronics failure on Chancellor Angela Merkel’s plane that cut short her trip to the Group of 20 summit.

A government official said investigators are looking at all possible causes following a German media report that the incident is being examined as a possible criminal act. The Airbus A340 experienced difficulties southwest of Amsterdam on Thursday, less than an hour into the flight from Berlin. A routine inspection suggests a technical malfunction of the plane’s air-to-ground communications systems, a German Air Force spokesman in Berlin said by phone. At this point, there’s no immediate evidence of a crime, he said.

The pilots dumped fuel, but even so, the plane touched down in Cologne with a heavy load for a trans-Atlantic flight. News portal Spiegel Online reported the plane suffered a complete failure of its communication system that left the crew without contact with ground control.

The German leader plans to fly to Madrid early Friday and from there take a commercial flight to Argentina, accompanied by Finance Minister Olaf Scholz and a small delegation, according to an official. The media contingent who had been traveling with her will remain in Germany.

There were few early signs of trouble on board the flight, aside from a frozen video screen that would normally show the progress of the flight. Then, as Merkel was speaking with reporters about the latest tensions between Russia and the Ukraine, the door opened and a crew member asked her to come out.

“Why now?”, Merkel asked. “It’s urgent,” the crew member replied. Later, Merkel would say she thought something bad had happened in Germany.

Scholz remained with the reporters until Merkel returned 10 minutes later. “The world is already full of problems,” Merkel said. “Now we have one more minor problem. The plane has a technical defect. We have to fly back.”

The captain announced the plane’s electronic systems had failed, rendering it unable to cross the Atlantic. Fire trucks with blue lights waited on the runway as the plane landed 30 minutes later before taxiing to the military area of the airport.

After landing at Cologne, the reporters were told they would switch to a substitute plane.

After 30 minutes on board as firemen inspected the plane, a spokesman told reporters the replacement plane would be unable to fly to Buenos Aires, because the crew had already worked too many hours.

In Argentina on Friday, Merkel had been scheduled to meet with President Donald Trump, Chinese leader Xi Jinping, as well as their Argentine host, President Mauricio Macri. She is due to arrive in time for the traditional summit leaders’ dinner.

After disembarking, Merkel, her husband Joachim Sauer, Finance Minister Scholz and her security officers sat for some time at a desk in the airport restaurant. Leaving shortly after midnight, she told reporters there had been a “serious problem.”

“I’m glad we had the most experienced captain of the German Air Force in command,” she said.

It’s not the first time for German officials were left stranded. Scholz experienced a mishap last month returning from Bali, Indonesia, when rodent damage incapacitated the same government plane. Last year, Merkel was delayed on a trip to Egypt because a windshield heater malfunctioned.