I Live in Honduras, Where People Are in Constant Fear of Being Murdered. It’s No Wonder They Join Caravans 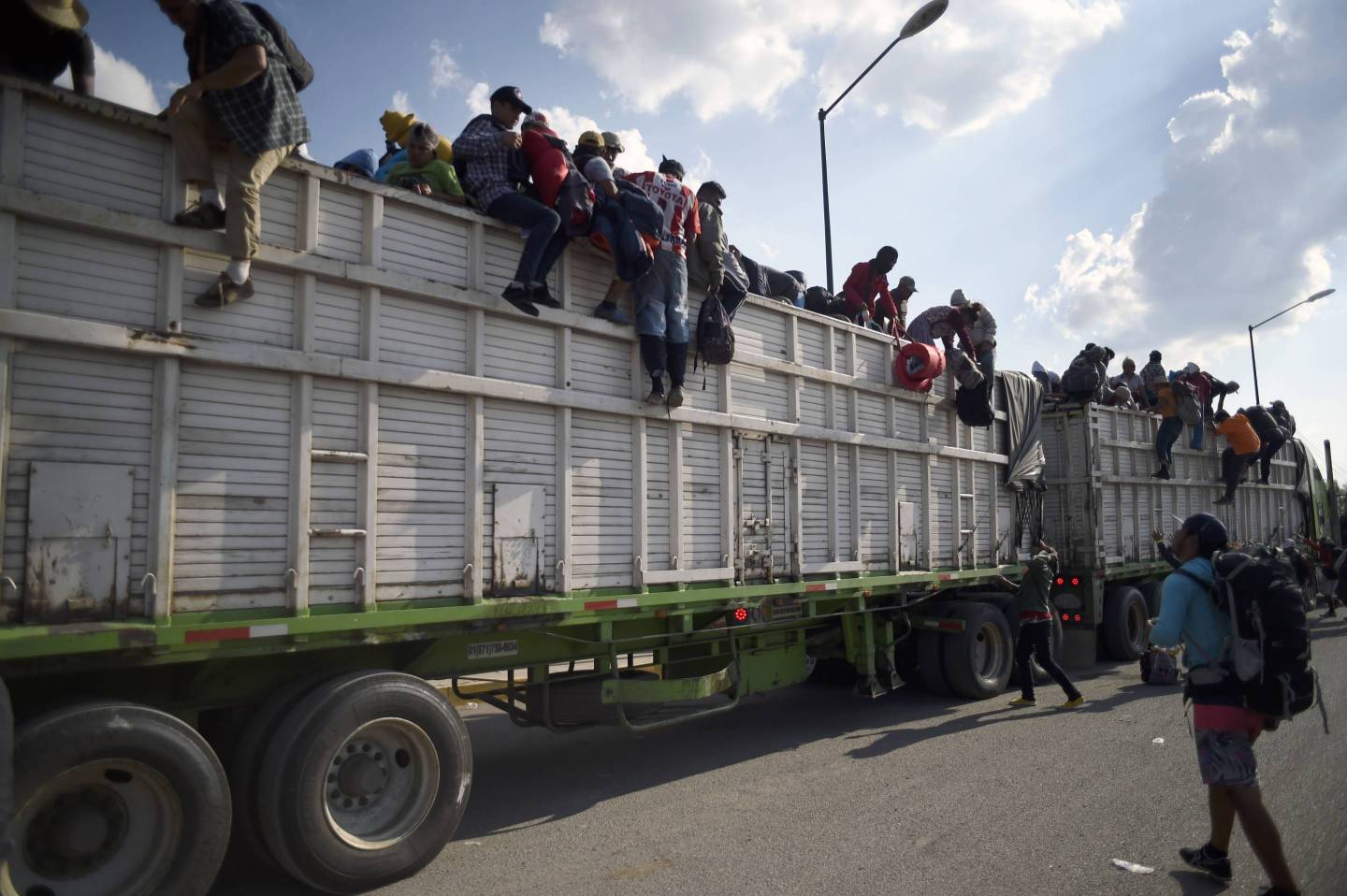 Central American migrants -mostly Hondurans- taking part in a caravan heading to the US, descend from a truck, on arrival at a temporary shelter in Irapuato, Guanajuato state, Mexico on November 11, 2018. - The trek from tropical Central America to the huge capital of Mexico is declining the health of the migrant caravan that endures extreme climate changes, as well as overcrowding and physical exhaustion, and still has to face the desert that leads to the United States. (Photo by ALFREDO ESTRELLA / AFP) (Photo credit should read ALFREDO ESTRELLA/AFP/Getty Images)
Alfredo Estrella—AFP/Getty Images

At the end of October, I sat with my friend Graciela, counting up all the murders we’d heard about over the last week in her sector of Choloma, a city in Honduras. We thought it was about seven. It turns out, between us, we’d heard of at least 10.

Murders. In one sector. In one week. Four young men, three young women, one bus driver, one older man who worked for the municipality, and one “colgado”—a body hung up as a warning.

This was at the same time the Central American caravan was making headlines in the international press, when people started speculating that mysterious political forces were behind this mass exodus of people from Honduras.

As Graciela—whose own brother was murdered a little over a year ago—and I went back and forth, I thought, This, this is why people leave. And this is what people outside of Honduras seem to not fully understand.

Months earlier, 9-year-old Andres told me about the first time he saw someone killed in front of his eyes, and the second time, and the third time. He talked about the murders he’d seen in a halting way, wishing he could unsee the things he’d witnessed. I told him I’ve actually never seen anyone be killed. His eyes widened, incredulous. That seemed impossible to him: someone my age, a grown adult, never having seen these things. He dreamed about going to the U.S., a place he imagined he might be able to live without seeing any more murders.

I have been living in San Pedro Sula, Honduras’s second-largest city and economic center, since September of 2017. I came to Honduras to research migration and life after deportation for my doctoral degree; I chose San Pedro Sula because it had become famous for being one of the most violent cities in the world, making migration and deportation questions of life and death. While Honduras has made significant strides in reducing its murder rate (from a high of 86.5 per 100,000 people in 2011 to 43.6 in 2017), it is still devastatingly high.

But what I’ve learned is that life here is so much harder than murder statistics could reveal.

One day, around noon, I showed up at Bayron’s house in Villanueva to collect a camera I’d lent him as part of a photography workshop I was running. His mother told me he was still sleeping, and I gently made a joke about him sleeping so late. No no, she told me, he was in line all night long last night. For school.

I didn’t understand at first. She explained that in order for Bayron to register for high school, he had to get in line the night before. Like devoted fans waiting for the box office to open, Bayron and his friends slept in that line, determined to get a spot in the public school this year. If he got there too late to get a spot, he would just have to wait until next year. This is how the public school system works across Honduras.

Bayron’s been deported once already; he left in search of better opportunities, safety, and stability. Back in Honduras, he’d rather be in school but the options before him are few if he cannot get a spot. Like so many, the next best choice might be migrating again.

Darwin, in the Rivera Hernandez sector of the city, also worries about what his son will do next year when it’s time to start high school. Here, the issue i­sn’t whether or not he would get a spot. Darwin’s neighborhood is controlled by one gang; the public high school is in a rival gang’s territory. His son would literally risk his life by going to school. Darwin has thought about sending him to private school, but he sometimes cannot find work for months and his wife, who is in her 40s, can’t get hired anywhere because of her age. They just shook their heads, tears welling up in their eyes, when I asked them what they would do.

Darwin looked up and told me, “Here, it’s a crime to be poor. The police treat us like criminals.” Darwin is careful to never leave home with more than 100 lempiras in his pocket—roughly $5—because he worries constantly that if the police find him with more money on him, they’ll arrest him for extortion. Many of his neighbors are in the “pozo,” Honduras’s maximum security prisons, awaiting trial for the crime of extortion. The apparent proof? Each was found with 300 lempiras on them.

People live on edge in Honduras, never sure when a stray bullet might hit them, whether they will be able to feed their families tomorrow, or if they will end up in jail without having done anything wrong. When word spreads that a caravan is forming, it doesn’t take much for people to join. No one needs to convince them, pay them, or promise them anything.

Even now, as Mexico has met the caravans with repression, protests, and deportation; Honduras has shut down at least one of its border crossings; and Donald Trump has sent troops to the U.S.-Mexico border, people in Honduras talk every day about forming new caravans, ready to walk thousands of miles for a chance, not even for a better life, but just at having a life at all.

Amelia Frank-Vitale is a doctoral candidate in anthropology at the University of Michigan. After working in Mexico from 2010 to 2015, where she focused on the multiple kinds of violence that Central Americans face while in transit, she now works in Honduras, studying how deportees reconfigure their lives and reimagine their futures after being sent back to some of the world’s most violent neighborhoods.