Inside the Wild West of Scooter Chargers 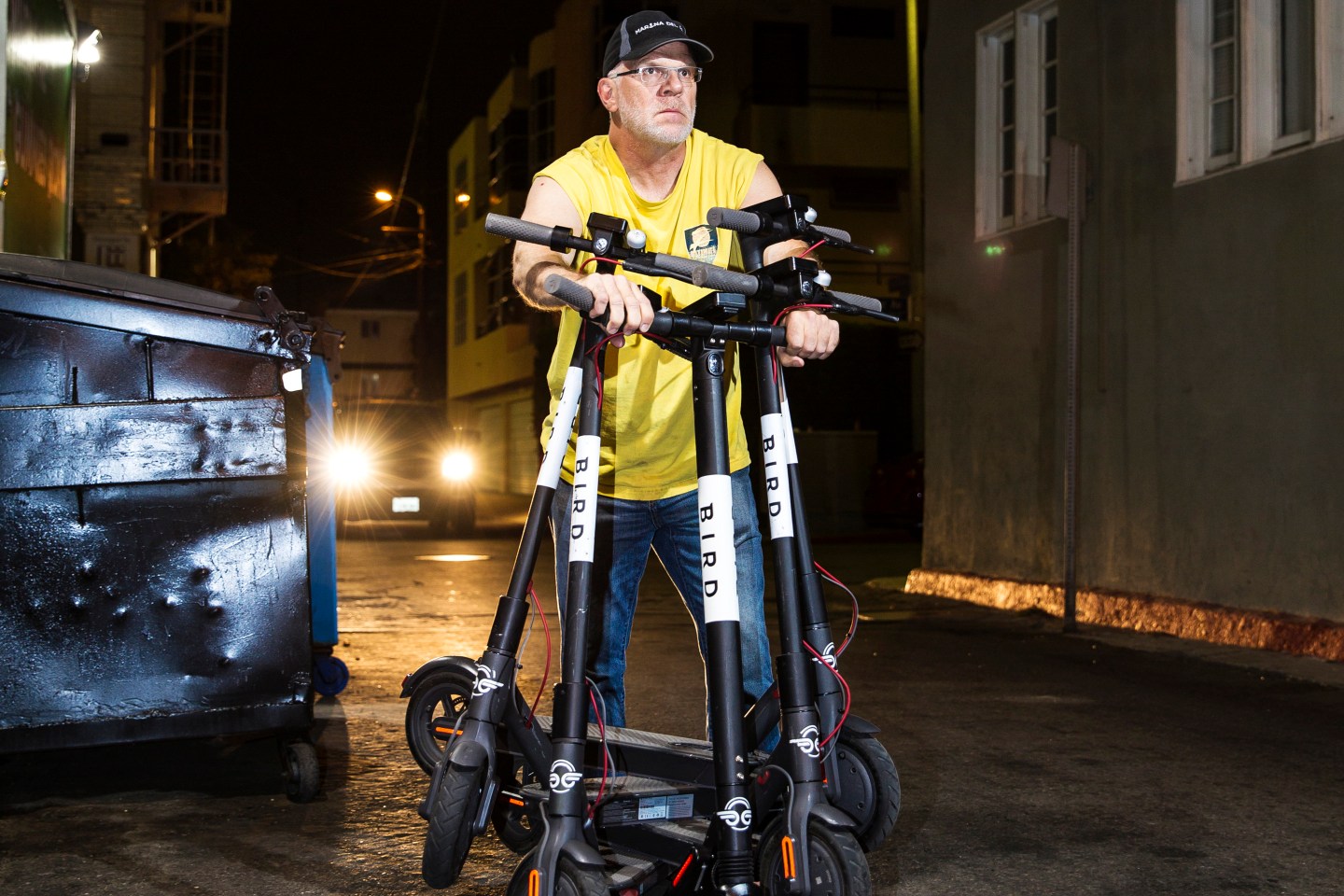 AROUND FOUR O’CLOCK IN THE AFTERNOON, well before the sun begins to set on the seaside city of Santa Monica, Mark Devlin hits the streets in search of electric scooters on life support. The wireless, dockless devices are wildly popular here, propped up on seemingly every corner of town in bright red, pink, black, or green. But humans must take them off-line to charge them. By late afternoon, there are usually a few here and there that have fallen below a functioning battery threshold. So Devlin goes hunting.

“You have to watch the Birds, see where they go, and see where they have congregated,” Devlin, 57, says. “Then I strategize what my night is going to look like.”

The real action starts after sundown. Many of the scooters, provided by at least four companies including Bird, Lime, Lyft, and Uber, deactivate at 9 p.m., when the services shut down for the night. So at 8 p.m., Devlin parks the U-Haul truck he rents for the occasion next to the largest flock he can find—to “preclaim them,” he says—and waits.

At the stroke of nine, Devlin kicks into gear. He homes in on a flock of Birds using the app on his mobile phone, tosses each one into his truck, and makes his way to the next location—only to find that another charger (or “Juicer,” as they’re known for Lime) has seized the spoils. No sweat; Devlin moves on. At another scooter gathering, Devlin sprints, successfully claiming one mere seconds before another charger. By 10 o’clock, streets once flush with scooters are swept clean.

Devlin, by day a stage designer for rock acts like Metallica and Judas Priest, makes about $200 to $300 a night (at $5 to $20 per scooter), picking up between 40 and 60 scooters for recharging as part of Bird and Lime’s bounty system for retrieval. The nightly gig helps pay the bills for his family of four and allows him to be his own boss. “I’m actually making more money doing this than what my chosen job is willing to pay,” he says. “The instant gratification—it gets addictive.”

Without a garage at home, Devlin charges scooters in his living room, half of which has been converted into a charging station. His wife doesn’t love the new decor, but “she really likes what picking up 60 Birds is doing to my body,” Devlin says with a chuckle. (Each scooter weighs 20 pounds or more.) Twelve hours later, he’s back on the street to deposit his catch at an official drop spot—a “Bird Nest.”

Hundreds of millions of dollars raised, billions of dollars in value—to say that the humble electric scooter has taken Silicon Valley and its sister to the south, Silicon Beach, by storm is an understatement. Santa Monica has authorized 2,000 motorized scooters as part of a new pilot program to solve the “last mile” of local journeys; San Francisco has green-lit 2,500 as part of its own effort. And e-scooters are appearing in cities across the nation including Atlanta, Baltimore, Denver, Detroit, Indianapolis, Miami, and St. Louis.

The logistics companies behind these electric scooters are valued like software startups, but many rely heavily on hardware and an army of independent contractors like Devlin to maintain their fleet. Without the help of freelance workers, some of these billion dollar businesses would fold. But the job, if not the entire business, is still in its infancy, and its effects on the local community remain to be seen. Under cover of night, scooter chargers compete with one another in a gamified gig for which the rules are hazy at best.

Some scooter chargers have faced violence. Devlin, for example, says he called the police after he was physically and verbally assaulted by a fellow charger who believed Devlin was gaming the system. Deedee Deschanel, a 29-year-old video producer, wears a bulletproof vest stocked with pepper spray when he goes Bird hunting on Saturday nights in Santa Monica. “You never know,” he says.

And for women like Brooke Thompson, who goes out at night, often alone, with a minivan to pick up scooters in the beach town, the darker hours can be daunting. She says she’s been catcalled, even stalked, on the job in the wee hours of the morning. “It’s fun being out,” she says, “but as a woman, I’m a bit more vulnerable too.”

Electric scooters are a mixed bag for the cities in which they are deployed. Though many riders appreciate them, some residents are less keen, seeing them as an eyesore and a nuisance. The companies’ launch tactics have also drawn scrutiny. In Santa Monica, Bird burst on the scene in 2017—the company is headquartered there—without permission from the local government. The city eventually sued; Bird agreed to pay a $300,000 fine. Even today, the anger over the incident hasn’t entirely abated; on a recent stroll in Santa Monica, a Bird scooter was vandalized to read “TURD.”

Thompson says she’s felt the heat firsthand. She’s received glares, snide remarks, and complaints about Bird when she’s out collecting scooters for money. Devlin’s 11-year-old son avoided telling friends that his father participated in Bird’s scooter bounty program; the name has “a certain amount of negativity,” the father says. “It’s like saying, ‘My dad works at the DMV.’ ”

“We found that Juicers enjoy the flexibility of an hour or two of work in the evening and working in the morning,” says Colin McMahon, who leads Lime’s Juicer program. He adds that the company correlates its supply of Juicers with demand for its scooters in a given community. As for Bird, a spokesperson says the company’s program can be a “great source” of supplemental income for its freelance chargers.

Unlike Bird and Lime, Lyft—which only deployed its Santa Monica fleet of electric scooters in September—uses full-time employees for recharging. It does help reduce some of the competitiveness, says Caroline Samponaro, head of bike, scooter, and pedestrian policy at the San Francisco company: “We can’t control operational excellence if we aren’t in control.”

Which charging system is better, and which startup will prevail in the Great Scooter Wars of 2018 and beyond? Ask the chargers themselves, and the bigger picture becomes clear.

“There’s no doubt that Bird chargers won’t exist in the near future,” says Devlin, pointing to the inevitability of technological progress. “But I don’t know that I’ll ever retire. I love working. I hope I never have to stop.”

Six things you need to know about an explosive new logistics business that’s sweeping across the globe.

The combined valuation of Bird and Lime, which together have raised $882 million in funding.

Numbers of Juicers, in 42 cities and counting, who have signed up to charge Lime scooters for money.

U.S. city slickers who have a positive outlook on electric scooters, according to a survey by Populus.

Miles traveled by Bird riders (during 10 million rides) as of the company’s first anniversary.

Citations issued to e-scooter riders across more than 15,000 stops, by the Santa Monica Police Department in 2018 to date.

Number of known e-scooter fatalities (a Dallas man died after falling sans helmet from a Lime scooter, according to police).

A version of this article appears in the November 1, 2018 issue of Fortune with the headline “Meet Tech’s New Bounty Hunters.”