Women Have a Voice: Watch 2 Protestors Confront Senator Jeff Flake to Call for an FBI Investigation 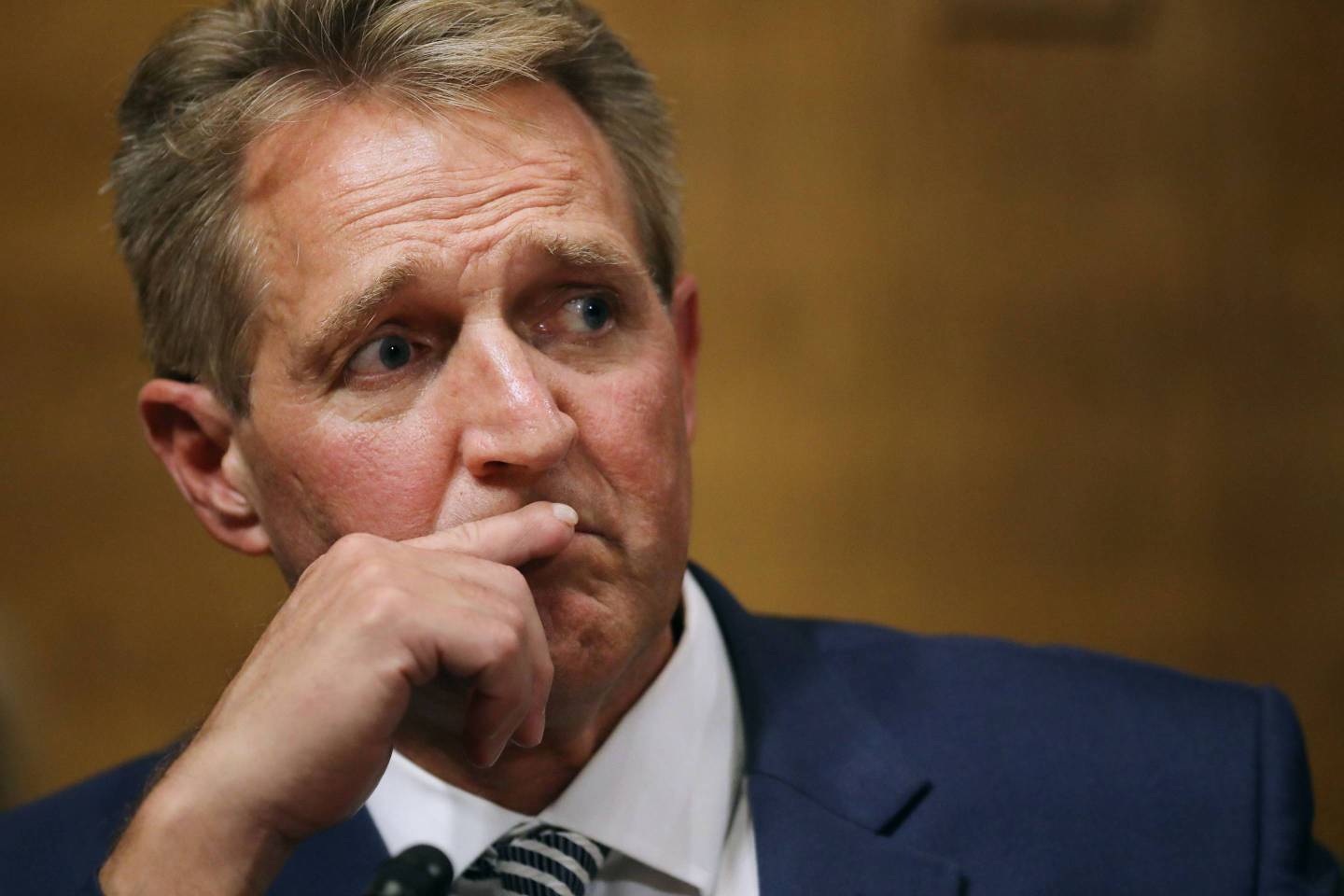 WASHINGTON, DC - SEPTEMBER 28: Senate Judiciary Committee Sen. Jeff Flake (R-AZ) listens to fellow committee members debate the confirmation of Supreme Court nominee Judge Brett Kavanaugh during a mark up hearing in the Dirksen Senate Office Building on Capitol Hill September 28, 2018 in Washington, DC. Flake was crucial in getting the committee to agree to an additional week of investigations into accusations of sexual assault against Kavanaugh before the full Senate votes. A day earlier the committee heard from Kavanaugh and Christine Blasey Ford, a California professor who who has accused Kavnaugh of sexually assaulting her during a party in 1982 when they were high school students in suburban Maryland. (Photo by Chip Somodevilla/Getty Images)
Chip Somodevilla—Getty Images

Before Senator Jeff Flake shocked the world by requesting an FBI investigation into sexual assault claims made by Dr. Christine Blasey Ford against Supreme Court nominee Brett Kavanaugh on Friday, the Arizona Republican was confronted in an elevator by two protestors who attempted to convince him to call for the probe. The scene was caught on video by people in the hallway, and may have ultimately tipped the scales in Flake’s determining whether to make his pitch to the Senate Judiciary Committee.

The two protestors, identified by the New York Times and other outlets as Ana Maria Archila and Maria Gallagher, confronted Flake, holding open the door of his a elevator, demanding an FBI probe. Cheddar’s J.D. Durkin was among the first to broadcast video of the scene via Twitter:

WATCH — Sexual assault survivors confront Jeff Flake on the elevator moments after he says he will vote to confirm Judge Kavanaugh pic.twitter.com/2d3ABs0s2H

CNN offered an alternate angle of the confrontation, in which Flake can be seen to be visibly affected by Archila and Gallagher’s pleas. “You’re telling all women that they don’t matter—that they should just stay quiet because if they tell you what happened to them, you’re going to ignore them,” Gallagher told Flake. “That’s what happened to me, and that’s what you’re telling all women in America.”

“Look at me when I’m talking to you,” she continued. “You’re telling me that my assault doesn’t matter.” Flake appeared to look up fleetingly throughout the confrontation, but mostly avoided eye contact with the women.

Women confront Sen. Jeff Flake after he says he'll vote yes to Kavanuagh: “That’s what you’re telling all women in America, that they don’t matter. They should just keep it to themselves because if they have told the truth you’re just going to help that man to power anyway.” pic.twitter.com/T7fSpyT69E

ABC News reported with a wider view of the commotion, showing just how many people were on-hand to see the protestors plead their case to Flake.

Ana Maria Archila, who confronted Sen. Flake in an elevator earlier today: "I went to Jeff Flake's office because I think of him as someone who sometimes chooses his conscience over his party."

"Today I had my hopes pinned on Senator Flake." https://t.co/3Y8se0H2sA pic.twitter.com/x7v4n8MtAL