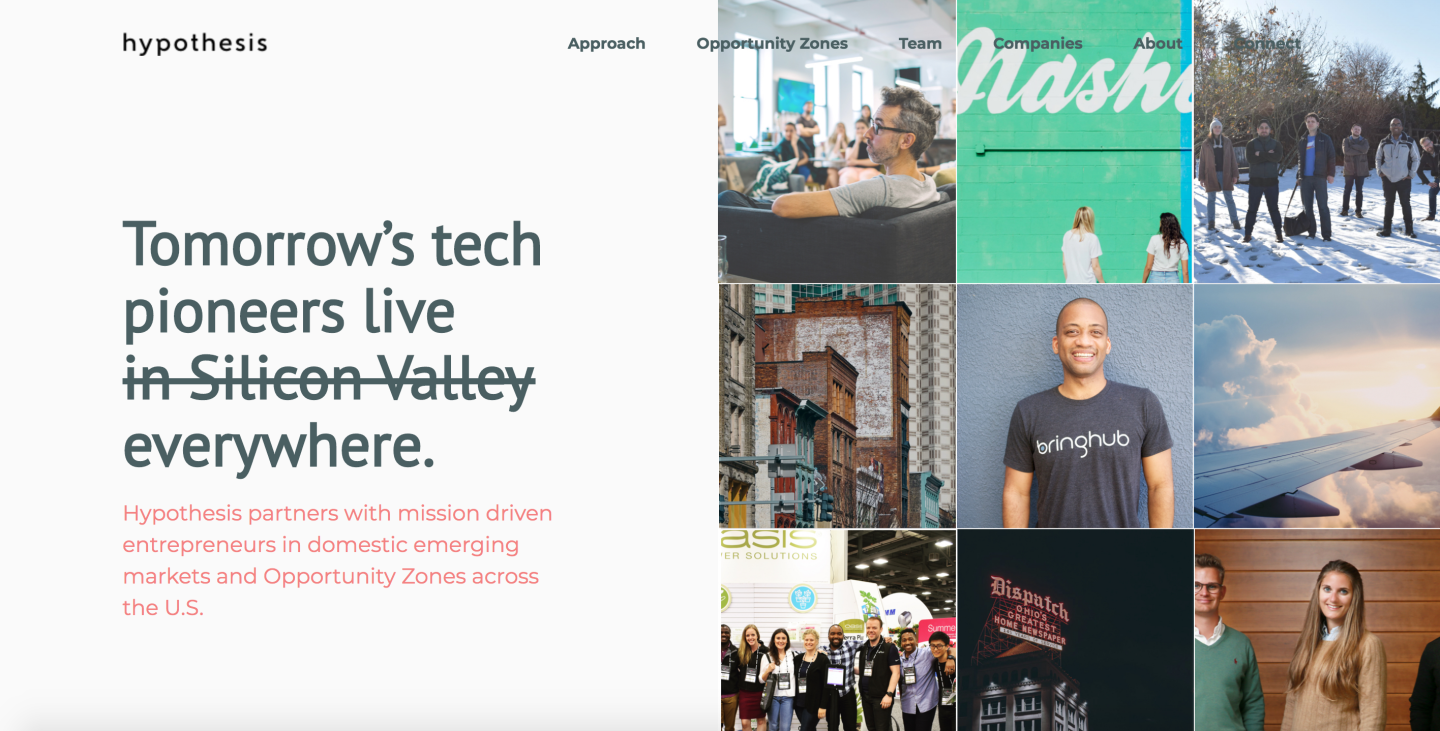 A venture firm called Hypothesis Ventures has formed to take advantage of a new $6 trillion opportunity — and that opportunity is found outside Silicon Valley.

Hypothesis plans to invest in early-stage tech startups in Opportunity Zones, a new capital gains exemption for people who make long-term investments in underserved communities. There are currently 8,700 designated Opportunity Zones in the U.S.

Hypothesis is one of the earliest venture firms to try to capitalize on this opportunity. The amount of capital eligible for reinvestment in Opportunity Zones is approximately $6.1 trillion.

An Opportunity Zone-focused fund allows investors to defer federal taxes on any recent capital gains until 2026, reduce that tax payment by up to 15%, and pay as little as zero taxes on potential profits from the fund if the investment is held for 10 years. At the same time, the influx of capital could help revitalize underserved communities across America.

The broader legislation, called the Investing In Opportunity Act, was part of Donald Trump’s tax reform package. The tax incentive is the brainchild of tech billionaire Sean Parker, who said it came out of a million-dollar bet with Peter Thiel.

“Peter Thiel bet me a million dollars that I wouldn’t get it done,” Parker told Forbes. “So that was part of my motivation.”

Parker created a think tank called the Economic Innovation Group to lobby for the legislation. EIG focuses on the causes of inequity and the potential of using tax policy to force profits out of portfolios and into low-income neighborhoods. Parker told Fortune in May that “it had to be something that conservatives and progressive both liked, but in the end would lead to urban or rural renewal and drive investment in the poorest areas.”

Now, venture firms like Hypothesis are emerging to pump capital into early-stage companies in underserved markets. The new firm plans to invest in startups, build co-working spaces, and run accelerator programs all over the country. The average check size will range between $100,000 and $750,000.

“We see Opportunity Zones as one of the most transformative engines for economic growth, job creation, and innovation of our time,” Hypothesis founding partner Peter Brack told Term Sheet. According to data he cited from Pitchbook, Brack noted that 66% of the most recent U.S. tech IPOs and 72% of U.S. tech acquisitions were of companies headquartered outside of the Bay Area.

Brack declined to share financial details around the firm’s debut fund or its structure, but he spoke with Term Sheet about his plans to take advantage of this $6 trillion opportunity.

TERM SHEET: Describe your firm’s investment strategy and what types of startups you plan to back.

BRACK: We’re looking at a pretty broad range of domains from fintech, to healthcare tech, to agricultural tech, to AI, to enterprise software. I think the really interesting strategy across geographies is that many of these emerging cities may lack things like capital or mentor expertise, but many already have some historical existing specialty. So for instance, in the Midwest, ag-tech is already quite developed, and same goes for robotics in markets like Pittsburgh and Detroit. We’ll see that while the Bay Area will continue to play a key role in what’s considered the epicenter of innovation, other cities will become increasingly important entrepreneurial hubs.

How does this differ from what Steve Case is doing with the Rise of the Rest Fund that invests in underserved areas?

BRACK: The more the merrier in terms of who’s investing in non-Bay Area markets and, more specifically, in underserved markets. That’s a lot of ground to cover, and there are many companies out there that could benefit from expertise and domain-specific help along the way.

Genius and talent are equally distributed across the U.S, and we feel strongly that success should be too. The zip code of an entrepreneur should not determine the size or the impact of a startup.

What cities will you look to invest in first?

BRACK: The markets we’ll start more strongly in will be Pittsburgh, Philadelphia, Washington D.C, Baltimore, Detroit, Chicago, New York, and Los Angeles. They are all markets we’ve spent a good deal of time already as investors and operators, so we already have pretty strong networks in those areas.

Where does your dealflow come from in the most underserved markets?

BRACK: It’s a lot of ground to cover even for the six of us. We’re building a scout network and mentor network across the country to help us find talented entrepreneurs faster.

Sean Parker said it wouldn’t surprise him if VCs started telling founders to re-locate into Opportunity Zones. Do you think we’ll see more startup founders moving out of the Valley and into these areas?

BRACK: Yes, I do. We’re already seeing that companies can exist anywhere. At Hypothesis, we believe that the future is already decentralized. Important companies and great founders live everywhere, and it’s about helping provide them with some of the tools. With the high-cost living in the Bay Area, it’s gotten really tough for early-stage companies to start and grow without a lot of funding.

In my opinion, the landscape has changed where we want others to see what we see. Amazon Web Services and others have made it far less costly and far easier to start a company anywhere. The playing field for entrepreneurship continues to level where location really shouldn’t matter. The next wave of really important companies will come from outside of Silicon Valley.

If everything goes right, the influx of capital will revitalize America’s declining communities. But if it goes wrong, it could gentrify neighborhoods and drive out low-income residents. What do you think about that aspect of it?

BRACK: If I were a local community organizer, mayor or governor, I would much rather have a massive wave of capital coming into my district, city, or state, than not. Given where we are today with so many underserved communities that have been left behind, this kind of funding can do a lot more good than harm.

Are you worried that the Investing In Opportunity Act could be rolled back by the next administration?

BRACK: No, not really. This has a solid standing given the fact that it was a broad, bipartisan coalition of supporters who pushed the legislation through. So there was buy-in not just by the federal government but also by governors and congressional leaders — both Democrat and Republican. I’m pretty confident that it is here to stay.

Are there any other downsides or risks of this legislation that people should be aware of?

BRACK: I don’t really see it. Maybe I’m just fundamentally incapable of seeing the risk of a lot of capital coming into markets that need it. But I do think there will be a lot of learning along the way. We haven’t yet seen all the final opinions coming out of the IRS and the Treasury. Regardless, we can get started right away, which is why people are starting to get more interested in Opportunity Zones.

How long before we see a material change in some of these underserved markets?

BRACK: We’ll see. It’s hard to compare one underserved market to another. We’re talking about very diverse cities and geographies. One underserved market may be part of Culver City in Los Angeles, which is just adjacent to the thriving part of town. Whereas another may be a market adjacent to downtown Detroit where the economics are very different. But overall, when a company starts to grow, that’s when we see job creation, neighborhoods transforming, and transportation and city organization beginning to improve. There’s a ripple effect. These things take a long time, but with a company that takes off like lightning, it could happen really fast. It all just depends.

We’re all looking at this with the long-term in mind. As venture investors, we see everything in 10-year cycles, but I think even in the the first 10-year cycle, there’s a lot of good that can be done for founders, companies, and communities around the country.