What You Need to Know About Far-Right Conspiracy QAnon, Which Was Present at the Tampa Trump Rally 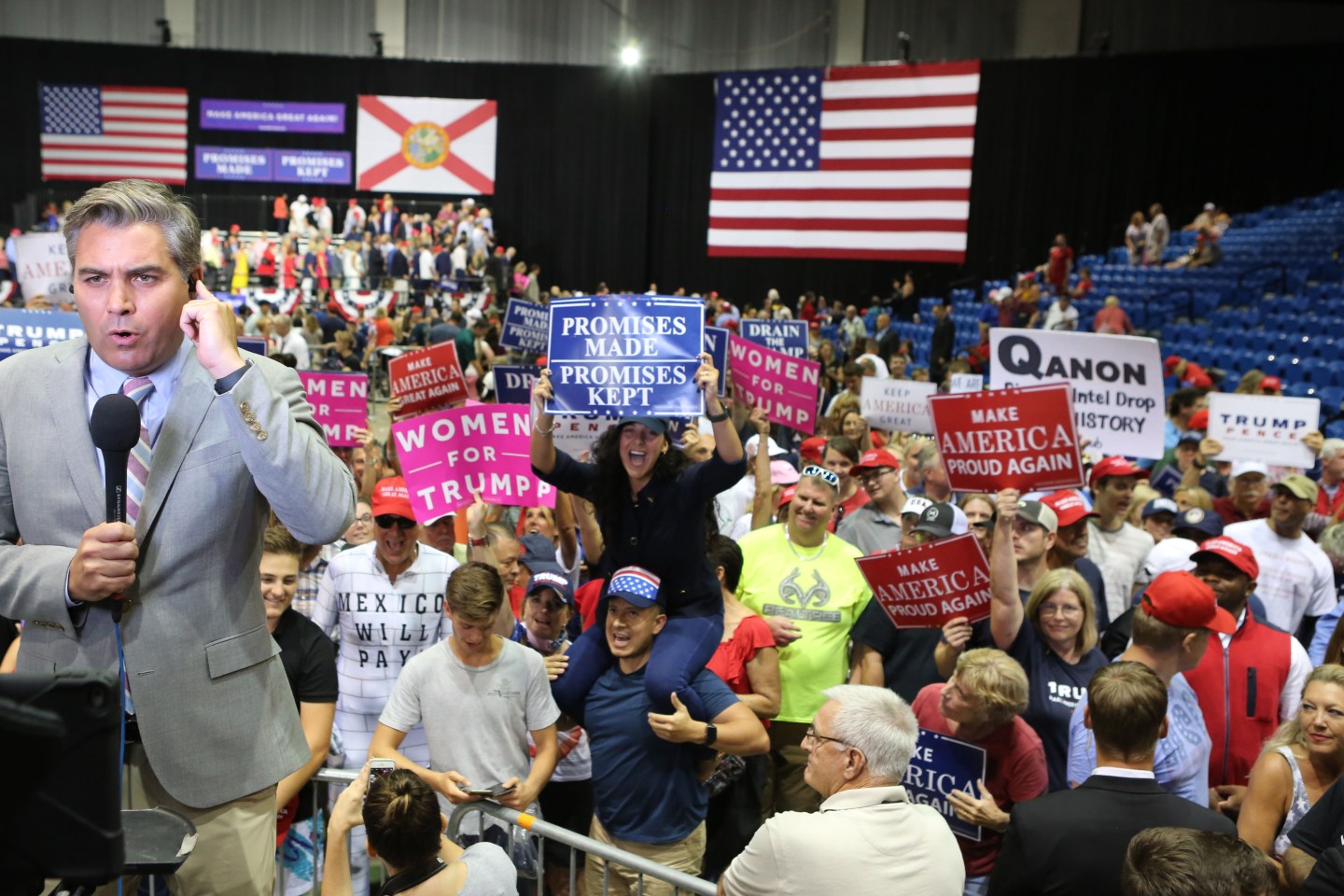 A new conspiracy theory, called “QAnon” is popping up in growing numbers on websites like 4chan and 8chan and at rallies like the one President Donald Trump held to stump for Republican candidates in Tampa on Tuesday.

The movement is led by an anonymous user or group of users on several platforms called “Q,” who claims that they are a government agent with high-level security clearance. Q posts pieces of information that followers, called “bakers,” then weave into what they think is an understanding of the “storm.” The Washington Post wrote that bakers took the term “storm” from Trump’s reference to “the calm before the storm” last year, to describe what they believe is an inevitable triumph of Trump over Democrats, elites, and saboteurs.

Generally, the movement is pro-Trump and anti-”deep state,” according to The Guardian. The outlet also called it “a volatile mix of Pizzagate, InfoWars and the Satanic Panic of the 1980s, multiplied by the power of the internet and with an extra boost from a handful of conservative celebrities.”

QAnon believers came out in full force in Tampa on Tuesday. Several supporters came wearing gear emblazoned with the letter Q while others held signs with phrases such as “We are Q” printed on them. The Post wrote that the loss of anonymity here points to the fact that the spread of these untruths is widespread and not confined to just the far reaches of the internet.

Among the falsehoods being spread by bakers, according to the Post, are the ideas that some Hollywood celebrities and known Democrats like Tom Hanks are pedophiles and that special counsel Robert Mueller was secretly hired to expose Democrats as a part of Trump’s larger plan. Many in the movement also believe that J.P. Morgan sank the Titanic and that Hillary Clinton, Barack Obama, and George Soros are planning a coup and traffic children on the side.

Like many other Trump supporters outside of the QAnon community, bakers believe that the American media are purveyors of fake news, calling press reports “Operation Mockingbird” after the alleged manipulation of the media by the CIA for propaganda purposes starting in the 1950s. The Rothschilds, a wealthy Jewish banking family, are said by the conspiracy theorists to lead a satanic cult to which Russian President Vladimir Putin is privy.

Bakers also believe that something called a “Great Awakening” will come before the final storm once they solve the puzzle that is all of the information given to them by Q. The Post piece on QAnon reads that this belief implies that Q’s information, once deciphered, will not only lead to an understanding of Trump’s triumph, but of the universe as a whole.

InfoWars’ Alex Jones, a regular conspiracist, has had a storied past with the movement. Roseanne Barr has posted tweets that appear to endorse Q and their views. Boston Red Sox pitcher turned Breitbart podcast host Curt Schilling also has promoted the theories.