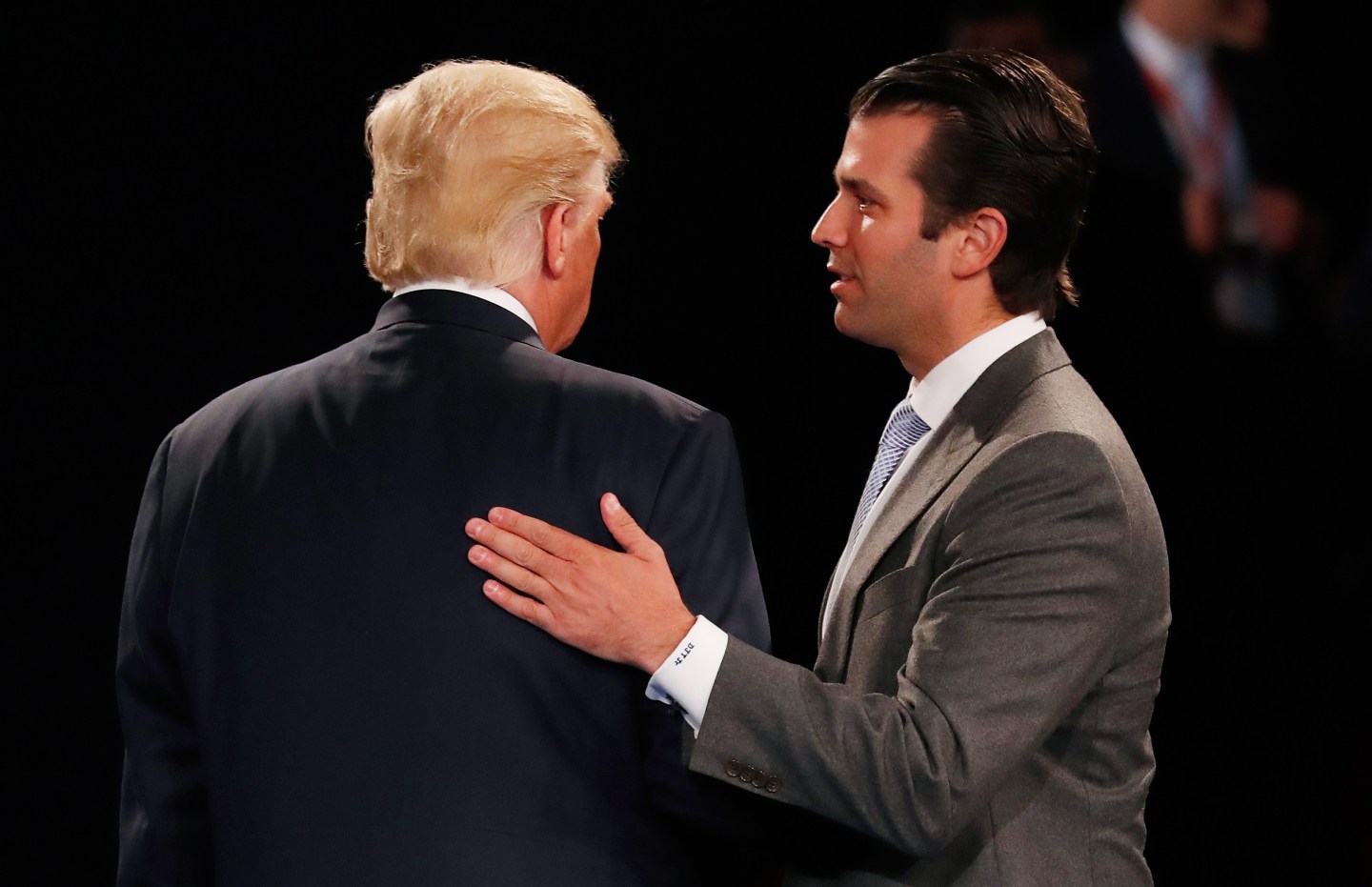 President Donald Trump faces potential legal and political danger if it’s proven he knew in advance about a meeting his son and campaign aides had with Russians said to be promising dirt on Hillary Clinton, according to former federal prosecutors.

The allegation reportedly made by Trump’s former personal attorney Michael Cohen adds an explosive twist to the famous June 2016 meeting at Trump Tower, which has become a focus of Special Counsel Robert Mueller’s investigation into whether anyone in Trump’s campaign conspired with Russia to interfere in the last U.S. presidential election.

Trump and his current lawyer, Rudy Giuliani, deny that Trump knew about the meeting beforehand and say Cohen is lying. “I did NOT know of the meeting with my son, Don jr.,” the president tweeted Friday morning. “Sounds to me like someone is trying to make up stories in order to get himself out of an unrelated jam.”

Trump has said he didn’t know about the Trump Tower meeting until a year later, when he dictated a statement on behalf of his son that the discussion was primarily about a dispute over adoptions of Russian children. That turned out to be misleading at best after revelations that the meeting’s organizer had pledged damaging information from the Russians on Clinton but the participants ended up discussing relief from U.S. sanctions on Russia.

While there’s no crime in lying to the public, Trump could face fresh legal jeopardy in the cases Mueller is building alleging conspiracy with Russia to interfere in the election and on efforts to obstruct his investigation, said Renato Mariotti, a former federal prosecutor who is now a partner at the Thompson Coburn LLP law firm in Chicago.

“Don’t think of crimes as something committed at a specific time and date,” Mariotti said. “Typically a white-collar crime is something that happens over a long period of time and it involves many different steps.”

Donald Trump Jr. could face charges of lying to Congress if Cohen’s allegation is proven true, as he testified under oath that his father didn’t know about the meeting.

Cohen is ready to testify that he and others were present when Trump was informed of an offer of material detrimental to Clinton ahead of the June 2016 meeting, CNN said Thursday, citing people with knowledge of the matter. Adding an element of mystery about the unnamed sources, Cohen’s lawyer, Lanny Davis, said in a a statement to MSNBC, “I have to wonder why the Trump people would put that out. It was not from us.”

Cohen is under investigation by the U.S. attorney in the Southern District of New York, and FBI agents raided his office, home and hotel room in April. In an interview on CNN Thursday night, Giuliani labeled Cohen a “pathological liar.”

That raises an important question about Cohen’s claims: Who has more credibility, the president, or his former lawyer?

“I would not place my faith in Michael Cohen’s credibility,” said Mimi Rocah, a former federal prosecutor in Manhattan. “The reason prosecutors win so many convictions is that they never rely on just one person.”

“You need other evidence,” she said. “Cohen’s claim may be a smoking gun, but how do you back that up? You look at the surrounding evidence and circumstances. You see Trump saying, around the same day as the meeting, we’ll have a major speech to discuss the Clintons. You look at the fact that he had a long-standing relationship with the Agalarovs, who helped set up the meeting.”

Prosecutors also ask juries to use their common sense, Rocah said. “Does it make sense that Trump knew about the meeting? You look at all the circumstances together and use your common sense.”

Should Cohen’s claims turn out to be true, Rocah agreed that Trump could have legal exposure.

There may be an obstruction charge as well, said Harry Sandick, a former federal prosecutor now at Patterson Belknap Webb & Tyler. If Cohen’s reported version is correct, “it would make it very hard for Trump to say there was no collusion,’ he said. “There would also be a potential obstruction charge, because he tried to prevent prosecutors from knowing what happened.”

While the most serious potential criminal charges relate to conspiracy and obstruction of justice, there are lesser offenses too. It’s illegal to knowingly solicit political contributions from foreign nationals, and providing stolen emails could be viewed as an “in-kind” contribution. Enforcement of a violation depends on which agency would pursue it.

If it’s the Federal Election Commission, it’s a civil matter, with the biggest penalty being a fine. The Justice Department can bring criminal charges for willful violations of federal election law, though its track record of winning convictions has been mixed. The maximum sentence for violating election laws is five years’ imprisonment, depending on the offense.

If Cohen testifies that Trump lied repeatedly and often about his knowledge of the Trump Tower meeting, that could put Trump Jr. in legal jeopardy.

The president’s son testified before Congress that he didn’t tell his father, according to a transcript released by the Senate Judiciary Committee.

“Did you inform your father about the meeting or the underlying offer prior to the meeting?” Trump Jr. was asked. “No, I did not,” he answered.

Democrats on the House Intelligence Committee, though, said Trump Jr. was in contact with a “blocked” number while he was in the midst of arranging the Trump Tower meeting with a Russian contact, Emin Agalarov. When asked about that, the younger Trump testified he didn’t know whose blocked number that was.

Trump’s primary residence at the time — Trump Tower — had a blocked number, according to separate testimony to the committee from former campaign manager Corey Lewandowski.

Lying to Congress is a crime punishable by as much as five years in prison.

Cohen could face legal trouble of his own if he didn’t tell the House and Senate Intelligence committees the truth when he was interviewed in their Russia probes.

The larger problem for the president is political. His own long-time attorney portraying him as a liar about collusion with Russia would undercut the president’s narrative that the Russia investigation is a “witch hunt” concocted by Democrats as an excuse for losing the presidential election.

With Democrats now favored by many analysts to win back the House of Representatives, Cohen’s reported allegations could move the needle closer to impeachment — a possibility that Democratic leaders have downplayed so far — and at minimum will reinvigorate efforts to investigate what happened.

To date, the key figures in the Trump Tower meeting have all escaped the bright lights of a public hearing, while top Republicans have lately trained much of their fire on the Justice Department, not Trump.

They can all expect very different treatment if Democrats are holding the gavel next year.

“If recent reports are true that President Trump knew in advance about the 2016 Trump Tower meeting, it would suggest that Donald Trump Jr. may have misled Judiciary Committee staff about the meeting when he was interviewed last fall,” Senator Dianne Feinstein, the top Democrat on the Senate Judiciary Committee, said Friday in a statement. “It further demonstrates the need to bring him before the committee to answer our questions.”